Demographic Trends In China and India

Demographic transitions to fewer children per family have been experienced everywhere that has undergone economic development. But, only a few have seen this accompanied by a severe gender imbalance among young people.

One historic policy tool in ancient times when there was an excess of young men was been to start foreign wars - which kills some of the excess young men, and allows some of those who survive to take women from abroad as plunder.

I sincerely hope that this won't happen now, and that fact that so many of these excess men are only children may tame this political instinct. But, policymakers need to be aware of the pressures pushing leaders in China and India in that direction. 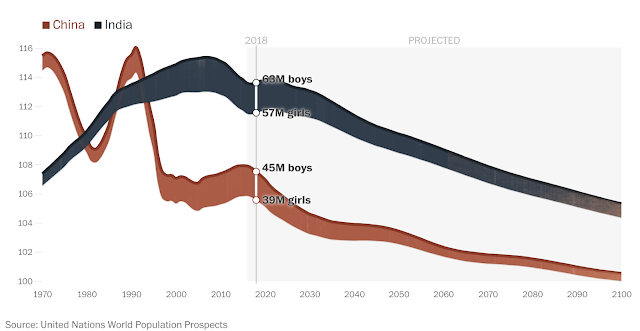 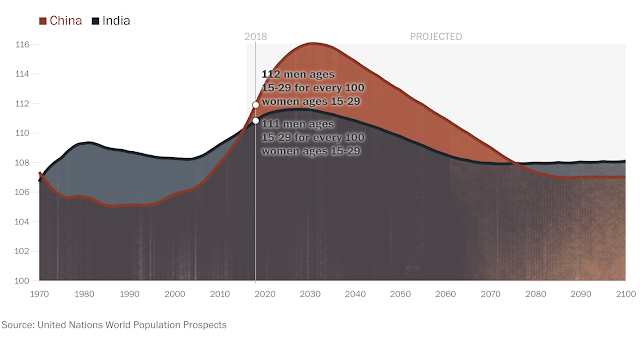 China is seven years away from peak population.

For 36 years, China’s ruling Communist Party stipulated that couples could have only one child except in special circumstances, such as if they lived in a rural area and their first child was a girl or a boy with disabilities. It was part of a strategy to boost China’s growth rate and its living standards at the same time.

The policy worked too well. In China today, home to 1.4 billion people, there are 100 million people under the age of 40 who are an only child. But the traditional preference for sons — and the associated practice of aborting daughters — means that there are about 34 million more men than women.

That in itself is a big problem. But add into the mix a tendency among millennial women to delay marriage and having even one baby — or none at all — and it’s a demographic time bomb.

China’s population is forecast to peak at 1.45 billion as soon as 2027, then start a long decline. About one-third of the population will be over the age of 65 by 2050.

In 2015, the Communist Party started unwinding the one-child policy, but it has had almost no impact. Women increasingly want careers of their own, and many would rather channel their energy into giving one child a good start in life than split their resources between two.

Solutions which one professor has been suggested include legalizing polyandry (i.e. allowing women to have more than one husband), and legalizing brothels. From the link above:

Chinese authorities have been trying for three years to reverse the devastating imbalances of their one-child policy and coax couples to have more children. They’ve told couples that it’s their patriotic duty to have two babies. They’ve dangled tax breaks and housing subsidies. They’ve offered to make education cheaper and parental leave longer. They’ve tried to make it more difficult to get an abortion or a divorce. None of this has worked. China’s birthrate remains stubbornly low and men greatly outnumber women, creating a demographic crisis that could hinder economic growth for decades to come. . . .

“If two men are willing to marry the same wife and the woman is willing, too, what reason does society have to stop them sharing a wife?” [Professor] Ng asked, citing polygamy as a common custom in ancient times and a continuing practice in some strains of Islam.

“I’m not denying the advantages of monogamy here, such as how exclusive long-term relationships can benefit kids’ growth and education,” Ng wrote in his column, according to the website SupChina, which first reported in English about the controversial remarks. “But given China’s skewed sex ratio, it’s necessary to consider allowing polyandry legally.”

Plus, it would just be more efficient, he continued, suggesting that women would have no trouble meeting the physical needs of multiple husbands.

“It’s common for prostitutes to serve more than 10 clients in a day,” Ng wrote, before taking off on another offensive tangent. “Making meals for three husbands won’t take much more time than for two husbands,” he added. Ng’s column went viral on the Chinese Internet. And many women on Weibo, China’s version of Twitter, were unimpressed.

“It made me throw up,” wrote a woman calling herself Keely, asking why Ng didn’t put himself in the woman’s shoes.

“Let me translate what he means: he wants to legalize sex slaves,” said another.

Ng is steeling for a fight. He wrote that his next column aimed at redressing gender imbalances would be about legalizing brothels. Because China’s gender mismatch has caused a fierce competition among men looking for wives, he said, “a man’s right to achieving sexual satisfaction is being severely violated if legal sex work is not allowed.”  Legalizing sex work and building more brothels would allow men to attend to their “urgent needs,” he wrote.

India, for different reasons, also has a significant excess of men.

India, a country that has a deeply held preference for sons and male heirs, has an excess of 37 million males, according to its most recent census. The number of newborn female babies compared with males has continued to plummet, even as the country grows more developed and prosperous. The imbalance creates a surplus of bachelors and exacerbates human trafficking, both for brides and, possibly, prostitution. Officials attribute this to the advent of sex-selective technology in the last 30 years, which is now banned but still in widespread practice.

In the two countries [China and India], 50 million [of the 71 million] excess males are under age 20.