Presidential Race Polling Summary Four And A Half Months Out

The polls need to swing towards Trump by roughly 6.6 percentage points (implying national polling in favor of Biden by 2.6 percentage points), allowing Trump to take Minnesota, Wisconsin, Pennsylvania, Arizona, North Carolina, Ohio, Georgia, Iowa and Texas (but not Florida, New Hampshire, Nevada or Michigan) for Trump to win the electoral college, according to the FiveThirtyEight blog.

But a potential problem for Biden is that Trump could have an Electoral College advantage if the election tightens. Biden currently leads Trump by “only” 6.6 points in the current tipping-point state, Minnesota, but this is narrower than Biden’s 9.2-point lead in the national polls. 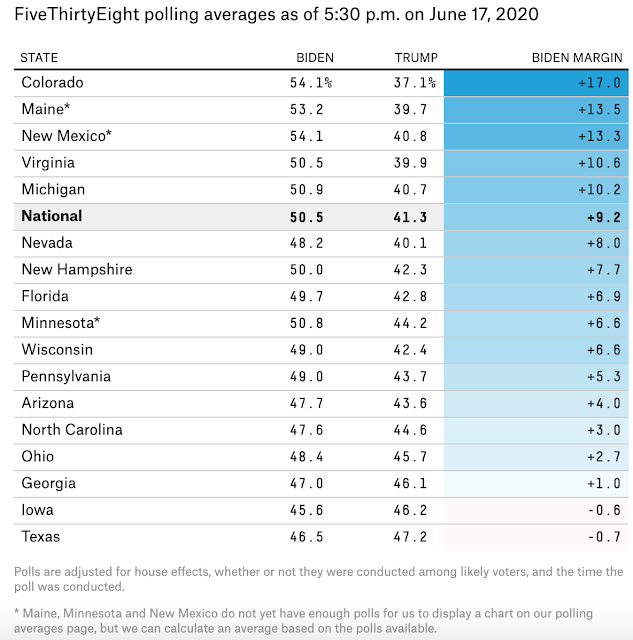 Cook's Political Report leans far to the right of FiveThirtyEight in its predictions, but the trends still aren't good for Trump in its June 2020 assessment.

To win the Electoral College, Biden needs 22 of the 86 votes in its "toss up" category. This would be Florida, or any two of the other four "toss up" states in their assessment.

Trump needs 66 of the 86 votes in its "toss up" category. Thus, he needs four out of five "toss up" states, one of which must be Florida (and also Ohio, Iowa, Georgia and Texas), to win.


Let's recall how many Electoral College votes some of these swing states have:

The states that Cook's rates as "Lean R" are polling 0.7 percentage points for Trump to 2.7 points for Biden and are really the "toss up" states that are in statistical ties.

The states that Cook's rates as "toss up" are polling 3.0 to 6.9 percentage points for Biden and are really "Leans D" states.

The states that Cook's rates "Leans D" are polling 6.6 to 10.2 percentage points for Biden and are really "Likely D" states. 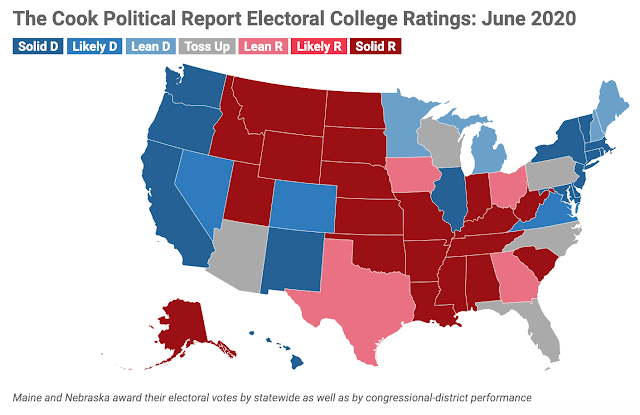 June 17th is so yesterday