Puerto Rico
Puerto Rico's 3.4 million residents are U.S. citizens who have no voting members of the U.S. House of Representatives, no representation in the U.S. Senate, and no Presidential electors.
Under Puerto Rico's Commonwealth status, it is self-governing to a somewhat greater degree than a U.S. state, but are still subject to the laws of the federal government that they have no say upon.
Puerto Rico has opted for Commonwealth status repeatedly in three way referenda with independence, the Commonwealth status quo, or statehood on the ballot held in 1967, 1993 and 1998 (1967 - 39.0%; 1993 - 46.6%; 1998 - 46.6%) with a tiny percentage favoring independence and Commonwealth status edging out statehood prior to 2012. Commonwealth status was previously popular mostly because domestic non-federal employee income in Puerto Rico is not subject to U.S. income taxes, although Puerto Rico is also not eligible for some federal welfare benefits either.
But a "2012 referendum showed a majority (54% of the voters) in favor of a change in status, with full statehood the preferred option of those who wanted a change. Because there were almost 500,000 blank ballots in the 2012 referendum, creating confusion as to the voters' true desire, Congress decided to ignore the vote." In 2017, a referendum showed 97% of voters favored statehood, although turnout was low.
But the status quo is really unconscionable democratically for a jurisdiction with 3.4 million people to have no say in the federal government that it is subject to, and if forced to choose between independence and statehood, Puerto Rico would almost surely choose statehood.
Granting Puerto Rico statehood would, like D..C. statehood, require only a federal statute, not a constitutional amendment, would not require approval from any U.S. state, and would not legally require approval in a referendum from the Puerto Rican people. Given the fact that Puerto Rico already voted for statehood in 2012 and 2017, it would not be illegitimate or undemocratic to honor those referenda in 2021.
The District of Columbia
This is also true in the District of Columbia, except that it has 3 electoral votes in Presidential elections, and multiple easy solutions. The most obvious solution for the District of Columbia (which could be done by a single federal statute without approval from any U.S. states) would be to make it a U.S. state (with the possible exception of a small federal district encompassing the main government offices, White House, Supreme Court and Capitol which would retain the residual 3 electoral votes that D.C. is granted under the U.S. Constitution), something most residents of the District of Columbia would support, although a referendum from D.C. residents is not legally required to do so. Alternately, the portions of D.C. annexed from Maryland could be returned to it (as the portions of D.C. annexed from Virginia pretty much already have been), in lieu of creating a new state. Or, the U.S. could adopt a constitutional amendment giving it the federal representation of a U.S. state without actually making it a state.
Realistically, if this was done, there would be wide support for repealing the 23rd Amendment to the U.S. Constitution (proposed in 1960 and adopted in 1961), that currently gives D.C. three electoral votes, but no representation in the U.S. House or U.S. Senate, which states:

SECTION 1 The District constituting the seat of Government of the United States shall appoint in such manner as the Congress may direct:
A number of electors of President and Vice President equal to the whole number of Senators and Representatives in Congress to which the District would be entitled if it were a State, but in no event more than the least populous State; they shall be in addition to those appointed by the States, but they shall be considered, for the purposes of the election of President and Vice President, to be electors appointed by a State; and they shall meet in the District and perform such duties as provided by the twelfth article of amendment.
SECTION 2 The Congress shall have power to enforce this article by appropriate legislation. 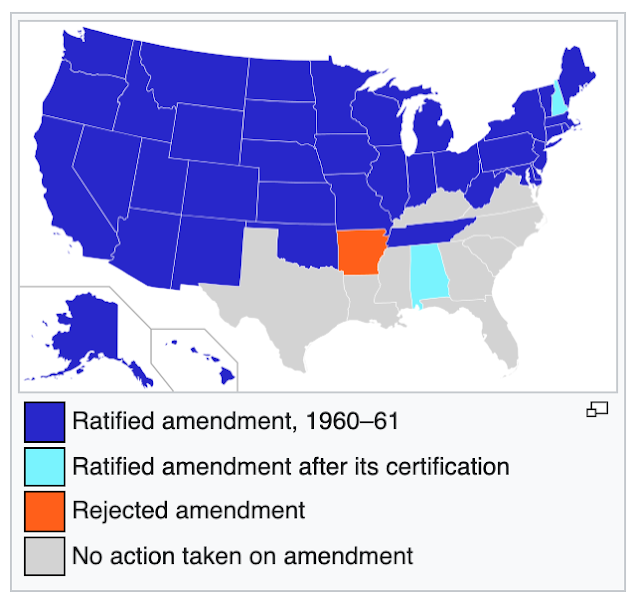 On August 22, 1978, Congress submitted the District of Columbia Voting Rights Amendment to the states for ratification. This sweeping proposal would have granted the District of Columbia full representation in the United States Congress as if it were a state, repealed the Twenty-third Amendment and granted the district full representation in the Electoral College plus participation in the process by which the Constitution is amended as if it were a state.

The amendment failed to become part of the Constitution, however, as it was not ratified by the required number of states (38) prior to its August 22, 1985 ratification deadline. The campaign for the proposed amendment ran into much fiercer conservative opposition due to the open and obvious fact that by 1978 the proposed amendment would have practically guaranteed two Democratic senators for some time; the amendment was criticized on various other grounds as well, and was not ratified even by several more "liberal" states.

(Source for image and material quoted above.)

The Congress, whenever two thirds of both Houses shall deem it necessary, shall propose Amendments to this Constitution, or, on the Application of the Legislatures of two thirds of the several States, shall call a Convention for proposing Amendments, which, in either Case, shall be valid to all Intents and Purposes, as Part of this Constitution, when ratified by the Legislatures of three fourths of the several States, or by Conventions in three fourths thereof, as the one or the other Mode of Ratification may be proposed by the Congress; Provided that no Amendment which may be made prior to the Year One thousand eight hundred and eight shall in any Manner affect the first and fourth Clauses in the Ninth Section of the first Article; and that no State, without its Consent, shall be deprived of its equal Suffrage in the Senate.

It seems unlikely that all fifty states would ratify such a change in the currently political circumstances of the United States.

I do not believe that this language bars amendments to the electoral college, as illustrated by the precedent of the 23rd Amendment.

Other Ideas For Constitutional Amendments

Some other ideas for constitutional amendments that aren't strictly on topic but go, in part, to U.S. Senate power that isn't unrelated to the discussion above.

Changing The Balance Of Power Between the President, U.S. House and U.S. Senate

Allow the U.S. House by a two-thirds majority, to enact legislation which is not approved by the U.S. Senate within some set period of time (perhaps six months) with a Presidential signature. The U.S. House would not be able to override a vetoed bill it approved in this manner without U.S. Senate support.

Thus, the two majoritarian branches, the President and U.S. House, could override the U.S. Senate with bipartisan support.

Reduce the threshold for overriding a Presidential veto, to either (1) majorities in both houses (making the Presidential veto a way to delay a law's enactment because he or she notice a problem with it, rather than actually reallocating power), or (2) a majority of the U.S. Senate and two-thirds of the U.S. House (preventing the unequal level of U.S. Senate representation to be leveraged excessively to prevent a veto override by states representing only a very small percentage of the U.S. population).

Replace the two-thirds approval required for treaties by the U.S. Senate alone with (1) a requirement that treaties be ratified by law, or (2) require majority approval by the U.S. Senate (preventing the unequal level of U.S. Senate representation to be leveraged excessively to prevent a veto override by states representing only a very small percentage of the U.S. population) and two-thirds approval in the U.S. House, for treaties, and provide that treaties override statutes unlike existing U.S. law where a domestic statute can override a treaty.

Require judicial and non-judicial Presidential nominations to be approved by both houses of Congress rather than just the U.S. Senate, provided however, that two-thirds majorities of each house of Congress (rather that the status quo than a majority approval of the U.S. Senate) is required to appoint a U.S. Supreme Court justice (the only lifetime appointees whose decisions can't be overridden by someone else). This would effectively require the President to secure bipartisan approval for nominations when the control of the House and Senate are split, and in all cases for U.S. Supreme Court justices.

End the authority of the President to make recess appointments.

Allow a President to be impeached for failing to faithfully execute the laws, violating the constitution, or for ceasing to be competent, rather than merely for "high crimes and misdemeanors"

Require two-thirds majorities to approve any action that could otherwise be approved by majority vote in ether house of Congress, between a Presidential election day and a Presidential inauguration.
This could take effect starting with the first President elected after the amendment is ratified to make it not about current partisan battles.
Lame ducks should be able to act only with bipartisan support.
Posted 4:15 PM
Email ThisBlogThis!Share to TwitterShare to FacebookShare to Pinterest
Tags: Political Tactics, Political Theory, Tax