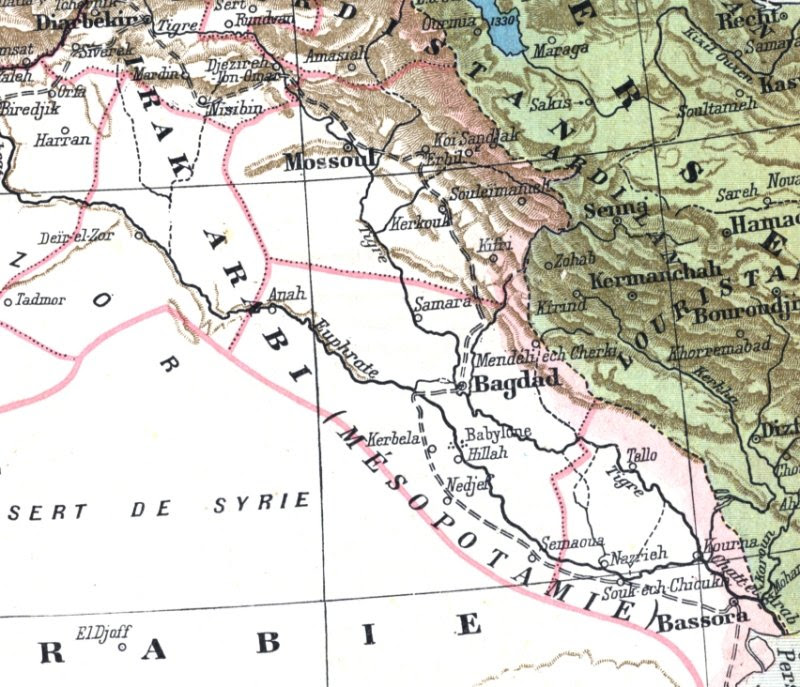 Historical map of Ottoman provinces of Musul, Baghdad and Basra.

Ottoman provinces of Diyarbekir and Musul in 1914, four years before Iraq was formed.

Iraq didn't exist in 1917. It was invented in 1918 by a British woman by the name of Gertrude Bell on tracing paper and in letters to the government in London.

[British Oriental Secretary] Gertrude Bell . . . in 1918 drew the borders of his country from three disparate provinces of the former Ottoman empire . . . .

Bell sketched the boundaries of Iraq on tracing paper after careful consultation with Iraqi tribes, consideration of Britain's need for oil and her own idiosyncratic geopolitical beliefs.

"The truth is I'm becoming a Sunni myself; you know where you are with them, they are staunch and they are guided, according to their lights, by reason; whereas with the Shi'ahs, however well intentioned they may be, at any moment some ignorant fanatic of an alim may tell them that by the order of God and himself they are to think differently," she wrote home.

She and her allies gave the monarchy to the minority Sunnis, denied independence to the Kurds in order to keep northern oil fields for Britain and withheld from the Shiite majority the democracy of which she thought them incapable.

"The object of every government here has always been to keep the Shi'ah divines from taking charge of public affairs," Bell wrote.

She confided in her father her greater hopes. "You are never to repeat -- because officially I may not hold these opinions -- that from the very beginning I've felt certain that if ever we succeed in setting up an orderly Arab independent Kingdom here we shall drive both the French and the Zionists into the Mediterranean. Of course they will all want to come in with us. And it will happen.'' . . . .

The names and families have held through the decades. Bell's Baghdad landlord was from the Chalabi family, the key minister in the Iraq government was Jafar, and Britain's nemesis in Iraq was a scowling young Shiite cleric named Sadr.

"The vilain [sic] of the piece is Saiyid Muhammad Sadr, the son of old Saiyid Hasan Sadr," she wrote home. ". . . Saiyid Muhammad was the man who first received us, a tall black bearded alim with a sinister expression. At the time you and I paid our call, Saiyid Muhammad was little more than the son of Saiyid Hasan, but a month later he leapt into an evil prominence as the chief agitator in the disturbances. He has still a certain amount of influence and it's a hand to hand conflict between us and him. He is in a black rage and I feel as if we were struggling against the powers of evil in the dark. You never know what Shi'ahs are up to." . . . .

Bell's camp ensured that Britain and its military would have say over Iraq's government and oil for decades to come. London installed a foreign Sunni sheik, Faisal, as Iraq's king in a rigged plebiscite with a Hussein-style, 96 percent yes vote.

To suppress Shiite and Sunni tribal revolts that followed, Britain pioneered air assaults on villages and the use of artillery shells filled with poison gas.

Though Iraq was given formal independence in 1932, the monarchy ensured British dominance until 1958, when mobs tore the young King Faisal II limb from limb. . . .

She killed herself in 1926, taking an overdose of sleeping pills in her bed on a hot summer night in Baghdad.

There is a constant temptation to assume that the present is the way that life has always been and always will be. Of course, the present is not eternal. In most of the world, political boundaries are recent and arbitrary. Iraq is no exception. It is 88 years old as a country. The people didn't vote to form it. But for the British use of military force every bit as brutal as that Saddam Hussein committed, it would not have held together (this is not to say that contemporary Ottomans were better -- the Armenian genocide was raging to the North of Iraq in what is now Turkey as Bell was forging Iraq). The inclusions of these Ottoman provinces in a single unit was ad hoc and designed for the advantage of the British, not Iraqis. The people of Iraq, indeed, spent four decades under a foreign installed monarchy before they managed to find their own dicators.

Before Gertrude Bell established the country of Iraq, the principal Ottoman political subdivision (with the year each was formed) that went into Iraq were Baghdad (1535), Basra (1546) and Mosul (1535), as well as part of Diyarbekir (1515), the rest of which went to Turkey, and a chunk of whatever province contained much of Iraq's thinly populated Southwestern desert, most of which is in Iraq's Anbar province now.

Now, the American led Iraq War has established a new regime in Iraq, and set off a regionally distinct, factional, civil war in Iraq. Remnants of Ottoman Diyarbekir and Mosul, which are still parts of Iraq, might become an autonomous Kurdistan; central Iraq might become an autonomous region of Baghdad; and that the South might become an autonomous Basra. This, or something along those lines, might quell much of the violence in Iraq now. (Daniel Schorr, who is National Public Radio's in house voice of conventional wisdom on foreign affairs is beginning to come to the same conclusion, seeing division rather than unification as the trend of our era, and the disintegration of Iraq as perhaps inevitable in the face of sectarian violence.)

The United States fought a civil war from 1861 to 1865 to maintain its territorial integrity. But, the nation it sought to hold together was the product of the democratic agreement of its constituent parts, and one can fairly question the legitimacy of the generally democratic basis asking for Southern succession because a significant share of the population, black slaves, were excluded from the process. The case for holding Iraq together is far weaker.
Posted 9:01 AM
Email ThisBlogThis!Share to TwitterShare to FacebookShare to Pinterest
Tags: Military