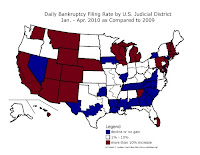 Bankruptcies are up more than 10% for January to April 2010 compared to the same period in 2009 for most of the Mountain West, the states around Lake Michigan, most of the urban Northeast, and greater Miami, Florida. Bankruptcy rates were declining, in contrast, in most of the South. Generally speaking, more urbanized areas were pinched more than more rural areas.

There are multiple ways to interpret the data.

A recovery in the non-automotive, but not the automotive sector of the manufacturing industry could explain why the bankruptcy is not high in places like the "New Rust Belt" in the South, and in the Pacific Northwest, both of which suffered significant unemployment earlier in the financial crisis as manufacturers laid off workers, but seem to be under less pressure now.

Surprisingly, the housing bust is a less accurate trace of the bankruptcy patterns than one might expect. Nevada is not at the top of the pile in terms of bankruptcy rate growth, despite the fact hat it has the worst housing situation in the nation. Yet, areas like Eastern Washington State, Montana, Wyoming, Utah, Colorado and Nebraska, which did not experience particular bad housing busts do have high bankruptcy rates.

No one theory is perfect, however. Alaska and Texas both have significant mineral extraction oriented economies, but have few bankruptcies, and the automobile oriented Northern Indiana and Ohio also seem to have little bankruptcy growth.

It may be easier to explain the pattern of rising bankruptcies as those areas hit hardest by the housing bust or automobile industry collapse, with Nevada, Northern Ohio and Northern Indiana's relatively low levels explained by outmigration from those areas of the people who would otherwise have filed for bankruptcy there, and with the Mountain West parts of the trend attributable to slumps in coal and hard metal mining.
Posted 9:26 AM
Email ThisBlogThis!Share to TwitterShare to FacebookShare to Pinterest
Tags: Bankruptcy, Economics, Financial Crisis