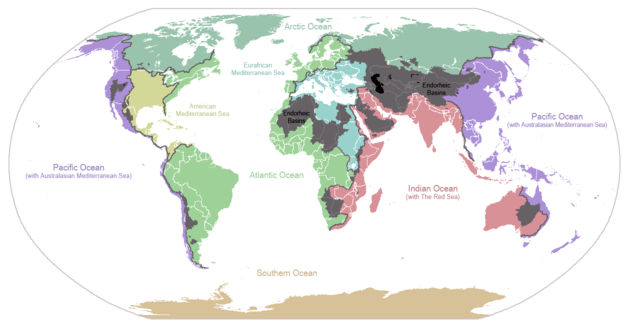 The extent to which inland seas like Lake Chad and the Caspian Sea have grown and shrunk in fairly recent history and pre-history is quite remarkable.

Variations in the climate of the Sahara coincide with the variations in the size of Lake Chad to a great extent, and are also pivotal to key events in human pre-history. For example, the climate of the Sahara helps explain the distinct waves of hominin migration out of Africa (Homo erectus, Neanderthal, modern humans). Domesticated African Sahel crops(which is the likely source of the expansion of the Niger-Congo languages and the population genetics of West Africa) appeared around 4000 BC, at the wettest point in the recent history of the Sahara.

The Lake Chad basin is also home to two of the most notable genetic outlier populations in Africa: the Chadic language speakers of North Cameroon, who have a strong element of a Y-DNA haplotype (R1b) most similar to one found mostly in the North Atlantic and Northern Mediterranean, and Fulani language speakers of North Cameroon, who share a Y-DNA haplotype (T) with the Upper Nile basin, Somolia, the Balkans and a swath of Dravidian language speakers in Central and Eastern India. Lake Chad's fluctuations in extent are also believed to be central to the history of the Nilo-Saharan languages.

The Caspian Sea also has fairly little known but important climatalogical history that is important to recent human pre-history. The Caspian was connected to the Aral and Black Seas by water for some part of the period after the Last Glacial Maximum, and there is evidence that its highest and lowest surface levels have varied by 100 meters in relatively recent times. Rock art from around 4000 B.C. in the Caspian Sea depicts boats similar to those found in Egypt at around the same time. There is also evidence of giant stone monument construction there. There also appear to be connections between Caucusian geographical place names and names found in the Egyptian Book of the Dead. Dating Caspian sea archeology, however, is complicated by the presence of calicium carbonate at high levels in this inland sea that may muddle carbon dating based on dry land measures.

A third endorheic basin (i.e. drainage system that does not lead to an ocean), the Tarim Basin, home to one of the last "discovered" Indo-European languages and one of the Easternmost historic population in North Asia with its genetic roots in the West rather than the East, also offers potentially paradigm changing insights about pre-history. It too has mysteries, such as the question of why people in the middle of what is now a desert would be barried in boats.

The Caspian Sea and Tarim Basins are believed by many linguists to be the homelands of the North Caucusian, Indo-European, Uralic, and Altaic languages, and the adjacent Tibetan Plateau may also be the homeland of the Sino-Tibetan languages including the various dialects of Chinese.

All three of these areas have been relatively little studied by geologists, ancient climatologists and archeologists until recently, and are even less known by specialists in the West. The communist block was largely off limits to Western researchers until the end of the Cold War, and Lake Chad, with its relatively harsh modern landscape was not an obvious place to look for ancient history.

Yet, the ancient climates of these areas may have had influences on our ancient history comparable to that of the Bering Land Bridge, which allowed the first hominins to enter the Americas, and the ancient geography of the "Southern Route" from Africa to Australia and New Guinea, which were both influence by ancient sea levels.

Endorheic basins, because they provide no natural connection to the rest of the world for ancient explorers tracing the sources of rivers, were probably more isolated in the ancient world, and hence more likely to have distinctive anthropological features. Their importance may rival that of mountain refugia like the Caucuses, the Nuba Mountains, and the Altai Mountains, and that of islands, in shedding light on deeper layers of history.

Also, because inland seas and lakes seem to vary more in extent than oceanic sea levels, the expansion and demise of these bodies of water may have had more intense impacts on local populations than recent, more modest rises and falls in oceanic sea levels.
Posted 4:36 PM
Email ThisBlogThis!Share to TwitterShare to FacebookShare to Pinterest
Tags: Climate, Evolution, genetics, History, language, water