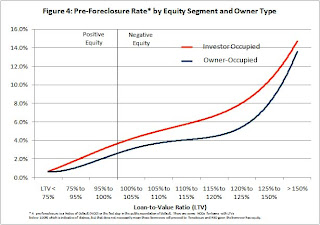 Nationally, roughly a third of homeowners do not have mortgages. If Colorado is typical, this suggests that about one in six Colorado homeowners has negative equity, and almost one in five have negative or low equity. A low equity home often can't produce a payout of a homeowner net of closing costs and real estate agent commissions if sold.

If Colorado is in line with national trends in the extent to which upside down homeowners are underwater, about half of the 20% of homeowners who have upside down mortgages have mortgages worth 125% or more of the value of their home. For example, a typical negative equity homeowner in Colorado might have a house worth $240,000 subject to a $300,000 mortgage.

These numbers are important because they illustrate the importance of one of the few key policy differences between Colorado Senator Michael Bennet and his Democratic primary challenger Andrew Romanoff. Bennet opposed allowing bankruptcy courts to cram down residential mortgage lenders as they can other secured lenders (which is the status quo); Romanoff favored changing the law to allow cramdowns of residential mortgages. The two men will face off in a Democratic primary this August.

What does this mean?

This means that if you go bankrupt, the only way you can keep your home is by making the same mortgage payment that you did before going bankrupt and keeping the full amount of the mortgage as a lien against your home, even if the home is worth far less than the debt. If the homeowner had negative equity, kept the home in bankruptcy, and the house then appreciated in value, the bank would receive all of the benefit until the house no longer had negative equity. Thus, even a homeowner managed to keep an upside down home after going bankrupt, that homeowner does not have much of an incentive to maintain the property afterwards, since any increase in value in the property will only enrich the bank.

In the typical Colorado case, of a house worth $240,000 and a loan for $300,000, a bankrupt homeowner that keeps the home, in addition to keeping the same payment, must turn over the first $60,000 of home appreciation after the bankruptcy to the bank.

In contrast, if the homeowner had surrendered the home, the bank would probably get less than the appraised value from selling the foreclosure property and the physical condition of the property would probably decline while it was vacant awaiting sale harming both the bank and the neighborhood where the property is located. The bank would also not get payments in the interim. Banks have a regulatory time limit that forces them to eventually sell the property, so banks can't simply hold the property indefinitely as a rental until home prices recover.

Homeowners who go bankrupt now have a choice between keeping their upside down property and providing the bank with a major windfall to the bank that it didn't bargin for, or surrendering it in a way that is a loss for the homeowner who has to move to find a new home, a loss for the bank, and a loss for the neighborhood where the property is located.

A cramdown provision would allow a homeowner who is going bankrupty under Chapter 13 (which involves a payment plan to creditors out of several years of future income) to reduce the amount of their mortgages to the value of their home and then to make payments based on the reduced mortgage amount rather than the original mortgage amount.

If a cramdown were permitted, and your house had 25% negative equity, you could stay in your house if you filed bankruptcy under Chapter 13, so long as you made roughly three-quarters of your current payment. All post-bankruptcy increases in value would be equity of the homeowner, not a repayment of the bank.

In the typical Colorado case, of a house worth $240,000 and a loan for $300,000, a bankrupt homeowner that keeps the home, if a cramdown were permitted, would leave bankruptcy with a $240,000 loan and a payment to match. The bank would take a $60,000 loss in the bankruptcy. From the homeowner's perspective, the effect would be the same as buying an identicial home next door for $240,000 with no down payment, except that the bankrupt homeowner wouldn't have to move the family to a new house.

This allows the homeowner to stay in the property, gives the homeowner an incentive to maintain the property in a way that benefits the neighborhood, and gives the bank payments that would have been missed during a foreclosure period and a mortgage asset that is usually worth more than what the bank could have obtained through the foreclosure process.

This would happen in the relatively swift matter of months that it takes to process a Chapter 13 bankruptcy, with only the paperwork required by the bankrutpcy court, not the largely illusory and drawn out mortgage modification process which requires mountains of paperwork and many, many months. Equally important, while the Chapter 13 process was pending, creditors would generally be prevented from disrupting that process with collection efforts.

But, a cramdown would give the owners of the roughly 150,000 homes in Colorado that are upside down a much stronger ability to bargain for mortgage modifications on a prompt basis with lenders without actually going bankrupt.

Cramdowns Are Already Available To Real Estate Investors and Businesses

Are cramdowns a radical proposal? Not really. Ever real estate investor and business that files for a Chapter 11 bankruptcy is allowed to cram down its secured creditors in precisely this way. Similarly, someone who owns an upside down vacation home is permitted to cram down a mortgage in a Chapter 13 bankruptcy.

Banks don't worry much about cramdowns, because investors and businesses will abandon property if forced to give it a value more than it is worth in a bankruptcy, so they don't come out much better without cramdowns. Homeowners in contrast, frequently will give a bank a windfall to keep a property that isn't worth the mortgage on the property, because they have an emotional stake in keeping their families in their homes, and banks want to be able to economically exploit that emotional attachment in the bankruptcy process.

Negative equity continues to be concentrated in five states: Nevada, which had the highest percentage negative equity with 70 percent of all of its mortgaged properties underwater, followed by Arizona (51 percent), Florida (48 percent), Michigan (39 percent) and California (34 percent). Las Vegas remains the top ranked CBSA with 75% of mortgaged properties being underwater, followed by Stockton (65%), Modesto (62%), Vallejo-Fairfield (60%) and Phoenix (58%). . . .

From here (some quoted language from the blog post and some from its source; the state level statistics omit Louisiana, Maine, Mississippi, South Dakota, Vermont, West Virginia and Wyoming).

Close to half of all homes in Las Vegas (including those with no mortgages) have negative equity.

Negative equity is probably more likely to led to default and foreclosure in California, where a bank can not pursue a homeowner's other assets following a foreclosure of that person's home, but negative equity has always been a high foreclosure risk factor.

After all, most people who lose their homes in foreclosure have few other assets and can eliminate any deficiency judgment that a bank secured in a simple no asset, Chapter 7 bankruptcy. So, the percentage of foreclosures in which the ability of the bank to pursue a deficency judgment after a foreclosure matters is small.
Posted 1:41 PM
Email ThisBlogThis!Share to TwitterShare to FacebookShare to Pinterest
Tags: Bankruptcy, Colorado Politics, Economics, Financial Crisis

This is Martha Jackson, a webmaster of some quality financial websites having good internet presence and traffic. As I found your website is relevant to my one, I'd like to have you as my link partner. I'm ready to give you some healthy links (both text and banner) from content pages of my websites. If you want we can also “exchange articles” or “guest posts”.

I am available in gtalk also.

Looking forward to your quick reply.