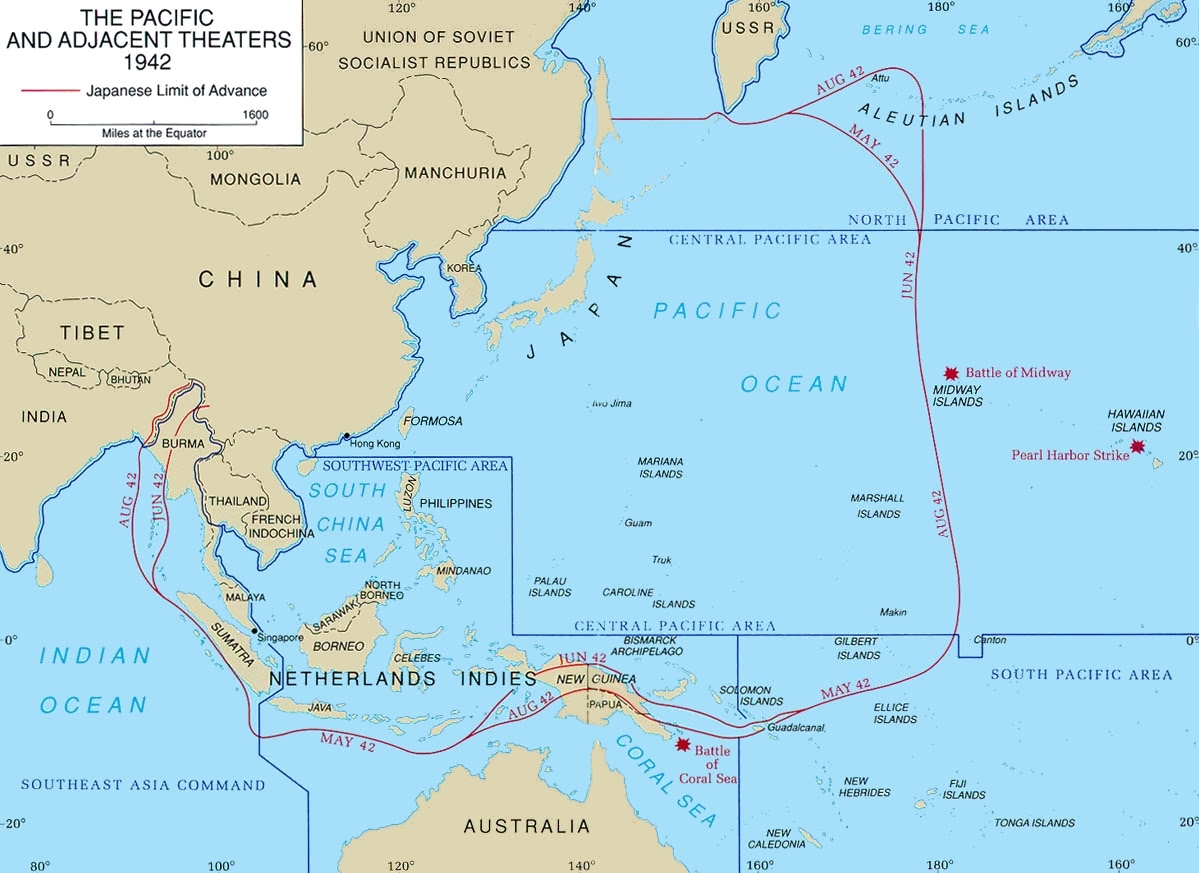 The Pacific Theater in 1942, shortly after the U.S. joins World War II in the Pacific via Wikipedia.

Today, December 7, in 1941, Japan launched a surprise attack on Pearl Harbor, Hawaii. It was event that changed history profoundly by bringing the United States, which had refrained from being an active combatant for the first two years of the war, into World War II. Wikipedia sums up the events and their significance:

The attack was intended as a preventive action in order to keep the U.S. Pacific Fleet from influencing the war that the Empire of Japan was planning in Southeast Asia, against Britain and the Netherlands, as well as the U.S. in the Philippines. The base was attacked by Japanese aircraft (a total of 353, in two waves) launched from six aircraft carriers.

Four U.S. Navy battleships were sunk (two of which were raised and returned to service later in the war) and all of the four other battleships present were damaged. The Japanese also sank or damaged three cruisers, three destroyers, an anti-aircraft training ship and one minelayer. 188 U.S. aircraft were destroyed, 2,402 personnel were killed and 1,282 were wounded. The power station, shipyard, maintenance, and fuel and torpedo storage facilities, as well as the submarine piers and headquarters building (also home of the intelligence section) were not attacked. Japanese losses were light, with 29 aircraft and five midget submarines lost, and 65 servicemen killed or wounded. One Japanese sailor was captured.

The attack came as a profound shock to the American people and led directly to the United States entry into World War II in both the Pacific and European theaters. The following day (December 8) the United States declared war on Japan. Domestic support for isolationism, which had been strong, disappeared. Clandestine support of Britain (for example the Neutrality Patrol) was replaced by active alliance and full participation in the European Theater. Subsequent operations by the U.S. prompted Germany to declare war on the U.S. on December 11, which was reciprocated by the U.S. the same day.

Japan also launched "a surprise attack on the Clark Air Base in Pampanga, Philippines on December 8, 1941, just ten hours after the attack on Pearl Harbor. Aerial bombardment was followed by landings of ground troops on Luzon." At the time, the Commonwealth of the Philippines had a legal relationship to the United States similar to that relationship that Puerto Rico has with the United States today, was home to a recently reinforced U.S. military presence, under the command of General Douglas MacArthur, and was at that time scheduled to leave the foreign policy shadow of the United States and achieve full independence in 1945.

The attacks were a tactical coup of Japan.

The Pacific Fleet, which had recently been relocated to Hawaii, was decimated, but all of the U.S. aircraft carriers (which were afloat away from the Hawaii at the time) and many smaller ships based there, survived and the fllet was soon rebuilt and actively engaged Japanese forces.

The Philippine and United States troops were forced to retreat to the Bataan Penisula, conceded the capital Manilla's status as an "open city" in January to prevent its destruction, and Major General Edward P. King, Jr. (against the orders MacArthur, his commander) surrendered four months later, on April 9, 1942 after which the prisoners of war endured the infamous Bataan Death March to their prison camp that killed at least 10,000 Filippinos and 1,200 Americans, out of the roughly 67,000 Filipinos, 1,000 Chinese Filipinos, and 11,796 American prisoners who surrended (perhaps 10,000 prisoners escaped). A Japanese occupation goverment ruled much of the Philippines over the next thirty-nine months in the face of a vigorous insurgency that eventually regained control of three-quarters of the province in the Philippines, and U.S. troops had landed and were fighting a bloody conventional war with Japanese troops for a little more than a year before the Japanese surrender on September 2, 1945.

Despite their tactical successes, the attacks were a strategic disaster for both Japan and the Axis Powers generally. As a result of these attacks, the U.S., Britain, Australia and other Allies to formally declare war on Japan, and in January, the United States, Britain, Soviet Union, China, and 22 smaller or exiled governments issued the Declaration by United Nations, which affirmed the Atlantic Charter. Despite the U.N. Declaration, however, the Soviet Union did, honor a neutrality agreement with Japan.

The Japanese high command's key mistake that prompted the attack was is mistaken belief that it was certain that any attack on the British Southeast Asian colonies, an attack crucial to its war plan, would bring the U.S. into the war. Since it thought U.S. entry into the war was inevitable, it sought to crush U.S. forces in the Pacific. In fact, had Japan refrained from attacking U.S. possessions like Hawaii (not yet a state) and the Philippines, it might have postponed U.S. military involvement in the World War II significantly and might even have prevented U.S. intervention in the Pacific entirely.

On October 8, 1940, Admiral James O. Richardson, commander of the Pacific Fleet, provoked a confrontation with President Roosevelt, repeating his earlier messages to Chief of Naval Operations Admiral Harold R. Stark and to Secretary of the Navy Frank Knox—that Pearl Harbor was the wrong place for his ships. Roosevelt replied that having the fleet in Hawaii was a "restraining influence" on Japan.

Richardson asked the president if the United States was going to war. In Richardson's account the president responded: "At least as early as October 8, 1940, President Roosevelt believed that affairs had reached such a state that the United States would be come involved in a war with Japan. ... 'that if the Japanese attacked Thailand, or the Kra Peninsula, or the Dutch East Indies we would not enter the war, that if they even attacked the Philippines he doubted whether we would enter the enter, but that they (the Japanese) could not always avoid making mistakes and that as the war continued and that area of operations expanded sooner of later they would make a mistake and we would enter the war.' ... "

U.S. involvement in World War II, of course, was a central factor in the defeat of the Axis Powers, both Japan and Germany, less than four years later, with Japan enduring the destruction of Hiroshima and Nagasaki by nuclear bombs and surrending to the United States, marking the only times in the history of the world that nuclear weapons have been detonated other than in weapons tests.

A stunningly well done webcomic set in the days leading up to that attack from the perspective of an ordinary American girl and an ordinary Japanese boy, called Dreamless, is worth a read.
Posted 11:55 AM
Email ThisBlogThis!Share to TwitterShare to FacebookShare to Pinterest
Tags: comics, History