Does Law Have Insufficient Visual Drama?

Once upon a time, where you wanted to sell real estate, you handed some soil or twig for the property to the buyer in what was called livery of seizen. Couples kiss, wear traditional costumes, and exchange rings when they marry in front of a crowd. One of the traditional ways to revoke a will (recently litigated in Colorado) is to destroy or deface the physical document (which leads to a number of peculiarities of probate law). Traditionally, wills were read aloud after a death, although that rarely happens these days. Even though it no longer legally matters, it is traditional to seal a contract with a handshake. When sports teams finish a game, win or lose, the players each slap hands saying "good game", emotionally putting an end to disputes over the details that led to the final result. Churches acknowledge affiliations to their faith with dramatic baptisms in the Christian church and a vividly memorable circumcision ceremony for infant Jewish and (at least in traditional societies) adolescent Muslim boys. Basic trainees in the military, men entering monastic orders, and prison inmates have their hair shorn, and are stripped of almost all of their personal possessions.

The current story arc in the webcomic Red String's (set in Japan but written by Gina Biggs of Georgia) features Hanae Niijima, a lesbian whose mother will not accept the fact that she has come out or acknowledge Hanae's true love Fuuko Akimoto. The set up to the scene is in this dialog:

Hanae: Why can't you be happy for me? This is who I am. This is ME.

Mother: It's NOT you. You were my sweet little girl who liked flowers and unicorns; who loved to be dressed up in frilly clothes and have me curl your hair. You were never a tomboy!

Hanae: That's STILL me. You think you have to be boyish to like a girl? That's . . .you can't believe that.

Hanae decides the overcome the conceptual block that seems to be getting in the way of her mother by making a visual statement:

Hanae: Fine. [Grabbing scissors with one hand and her long flowing curly hair with the other.]

Mother: What are you doing?!

Hanae: If its frills and curls keeping you from accepting this then I'll get rid of them. Will that work?

Hanae then hands a long pony tail of crudely cut off hair into the hands of her shocked mother who sits, holding it, staring off into space. 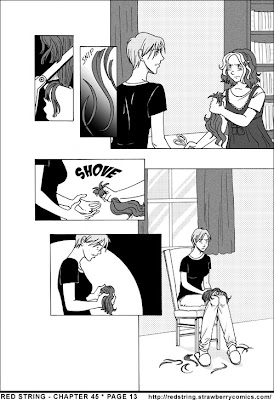 Obviously, I'm not recommending that this become a ritualized part of the process of coming out that is mandated in any way. But, powerful visual dramas can often convey meanings about abstract concepts, particularly emotionally charged ones, that some people have a hard time grasping from mere words.  Hanae's mother might be able to understand from the hair in her lap what she couldn't when her daughter merely spoke to her.

For example, one of the classic problems that one sees in modern family law litigation is that one or both of the people who once were married, or at least a loving couple, can't let go of that relationship. The service of the divorce petition, the signing of the papers, the dryly worded court order ending a marriage and providing for the sharing of the children and property of the marriage, and often a restraining order as well, don't communicate to the former member of that relationship with adequate emotional force that the relationship is really, once and for all, over.  Some people are simply beyond reaching by any means of communications, but a large number of people who go through family law proceedings simply don't really understand at an emotional and subconscious level what has happened until much later, even if they can parrot the court's ruling.

Perhaps if that message could be conveyed with more visual drama in some universally accepted new ritual, more people who move on, and there would be, as a result, less senseless fighting driven by old emotions instead of new practicalities. The demise of fault based divorce has made the process much more antiseptic for all involved in the process, but have we overdone it to the point of failing to really acknowledge in an emotionally valid way that not just the legal construct of the marriage, but also the emotional reality of the relationship that it approximates, has ended. Shouldn't the symbolism and ritual that ends of marriage need to be even more powerful and less subtle than the symbolism and ritual that starts one?

Adoptions tend to be even more understated, for fear of spooking the relinquishing parents, and not surprisingly, the main complaint that gets litigated in adoptions is that of relinquishing parents who claim they were properly appraised of the gravity of their actions.

A classic problem in consumer litigation of all kinds is the not infrequent failure of a debtor or consumer, already overwhelmed by paper and having trouble determining what is most important, to realize that a summons and complaint in a lawsuit is a once and for all speak now or forever hold your peace notice that has profound legal consequences if ignored.  This lack of understanding is one of the driver's of the almost ubiquitous paranoia about ulterior motives and about being cheated by one's betters found among unsophisticated people who have frequently been on the receiving side of litigation.

Perhaps we would do well to imitate the litigation practices of the protocol agents of the advanced civilization in the science fiction book "Jaran" by Kate Elliott, where legal disputes are announced by delivery of a physical baton in person by a courier, and one responds to the allegations at a mandatory in person appearance at the designated place and time, as inefficient as that may be, rather than simply enforcing the duty to appear by entering a default judgment against a party who does not appear (one that is often forgotten until property is seized pursuant to the judgment).

I have no empirically evidence to support the theory that more dramatic visual drama in the legal system would make any difference at all. The modern trend has been to strip away formalities, arcane language, pompous court room surroundings, wax seals, fancy ribbons and the like from legal matters. Instead, modern legal proceedings and legal facilities, favor plain English, the bare minimum of in person appearances, contemporary but understated and inoffensive surroundings suited for efficient, processing of business matters, dispenses with wigs and obtuse morning suits, and use very simple seals and acknowledgements - relying on the ability to confirm orders with third party repositories rather than lack of counterfeitability for reliability. Many documents that used to have to be notarized are now simply signed under penalty of perjury with no third party verification of identity or intent.

For lots of purposes this trend may be a good one. It demystifies the legal system and makes it more accessible to pro se parties. Much of what courts do is as much administrative business as it is emotionally meaningful decision making. For the most part, people prefer an inexpensive, quick, form driven informal probate process to the traditional succession proceedings of courts of equity will all their pomp and circumstance. And, some parts of the court process, like the delivery of jury verdicts finding someone guilty or not guilty, have managed to hold onto some of the drama that gives them emotional power. But, maybe some of the time, particularly in civil matters that don't involve business people and may have consequences for people who do not have the same cultural heritage as the lawyers and judges who are running the system, a higher touch, lower tech approach is in order and would make courts more effective. It is certainly a hunch that would be worth exploring with more systematic research.
Posted 1:49 PM
Email ThisBlogThis!Share to TwitterShare to FacebookShare to Pinterest
Tags: comics, Consumer Protection, Courts, Criminal Justice, culture, Divorce, Gay Rights, Legal Theory, personal reflections, private law, Psychology