Will The Oil Age Be A Brief Historical Blip? 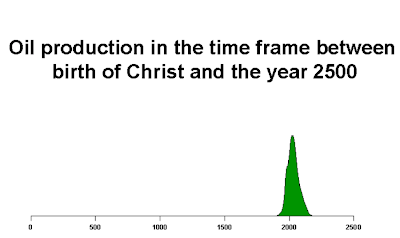 You don't have to be a die hard Peak Oil purist to agree with the gist of the implications of the graph above, posted at an NPR blog and based on an original presentation slide by Stephen Mayfield.

As noted by Wikipedia on Peak Oil:

Optimistic estimations of peak production forecast the global decline will begin by 2020 or later, and assume major investments in alternatives will occur before a crisis, without requiring major changes in the lifestyle of heavily oil-consuming nations. . . . Pessimistic predictions of future oil production operate on the thesis that either the peak has already occurred, that oil production is on the cusp of the peak, or that it will occur shortly. The International Energy Agency (IEA) says production of conventional crude oil peaked in 2006.

Peak oil production in the United States hit in 1970, but was pretty much irrelevant because oil trades in a world market. The U.S. has been a net oil importer since the early 1990s.

The United States isn't the only country in the world that has hit a localized peak in oil production as the illustration below from Wikipedia illustrates: 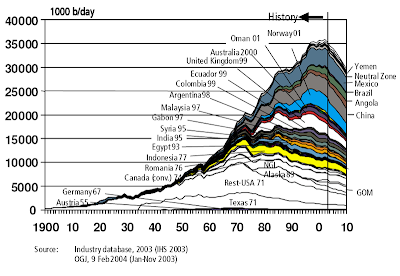 Some localized peak oil predictions are right around the corner: Iraq: 2018, Kuwait: 2013, and Saudi Arabia: 2014. In my grandchildren's world, most of the Middle Eastern oil powers will have greatly diminished oil wealth.

Whether peak oil is almost upon us or is, very optimistically (e.g. in the opinion of the most optimistic oil industry experts), a century out, in the big picture, the message is basically the same viewed through a long historical lens (and one could reasonably extend the chart above all the way back to 8,000 BCE when agriculture was begun for an even longer run historical perspective).

Most of the optimistic predictions assume that much of the new high cost oil production will come from "unconventional sources such as heavy crude oil, oil sands, and oil shale" that are made more attractive at higher oil prices. Even the optimists aren't predicting a sustained return to an era of oil prices of less than $40 per barrel (in 2008 dollars), and often half that, seen from roughly 1877 to 1972 and again from about 1986 to 2003. Instead, they predict a continued flow of increasingly expensive oil for a very long time. The current price for barrel of oil is about $100 which translates into gasoline prices of a bit under $4 a gallon at the pump in Colorado.

We learned how to make oil powered machines and oil based materials, we drilled and extracted vast amounts of easily available petroleum, and we very rapidly have burned through much of this non-renewable resource and continue to do so without seriously reducing our consumption of it. This use pattern has lasted about a century, and maybe it can last another, but it isn't sustainable.

For an oil economy to be sustainable, it needs to use biofuels or oil obtained from converting coal to a petroleum-like liquid fuel (such as the fuel produced in the Fischer–Tropsch process used by Germany and Japan during World War II). Rentech, Inc. has a proto-type plant in Commerce City, Colorado that produces about 10 barrels of fuels per day using the process from natural gas, and half a dozen other operations produce liquid fuels from natural gas or biomass using the process as well. There are a few small operations in the U.S., including one in Pennsylvania, that do small scale conversions from "waste coal" but only one Sasol plant in South Africa (which is coal rich, but oil poor) currently makes petroleum-like fuels from a combination of coal and natural gas on a large scale commercial basis using the technique.

You can extract more petroleum from deep wells, oil shale and the like, but this approach inevitably is still going to produce diminishing oil reserve growth and higher extraction costs. These options can bend the peak oil curve forward a little, but once the cost of extraction exceeds the cost of producing biofuels or converting coal or using other alternatives to oil (like fuel cell and battery powered vehicles), the technological capacity to extract more petroleum becomes irrelevant. The bottom line is that they aren't making any more new oil, so sooner or later, we're going to run out if we keep consuming it at a high rate as a core basis of our technological culture. Moreover, there is no more oil anywhere else in the solar system, since no place but Earth has ever had the biomass that broke down to produce petroleum.

The good news is that this imposes a natural limit on the amount of global warming inducing pollutants that combustion of petroleum can produce. And, petroleum consumption is the harder fossil fuel to refrain from using without being forced by resource constraints to do so, because it has fewer good substitutes. Our demand for coal is currently almost exclusively for electricity production, and that has easier substitutes that require innovation only by large, sophisticated electrical utilities, not by average people whose electricity consumption experience is unchanged by the fuel used to produce it.

The bad news is that to the extent that our standard of living is a product of cheap energy from petroleum, the future could bring real hardship as this one time economic boost is no longer available. Economists have attempted to estimate that impact, but given the uncertainties of technological developments and the inseparability of oil from our current economy's functioning, the efforts are speculative at best.

An economy based on cheap oil may be as transient as the brief period in the history of the Americas and of Australia when there was a brief burst of abundance arising from megafauna hunting until those fauna went extinct.
Posted 6:08 PM
Email ThisBlogThis!Share to TwitterShare to FacebookShare to Pinterest
Tags: Climate, Economics, Energy, History, New World, Peak Oil, Technology

The most optimistic are the abiotic hydrocarbonists, including a Lawrence Livermore Laboratory study.

If there are no abiotic hydrocarbons, then yes of course oil is a historical blip. More ominously, were modern civilization to collapse due to e.g. global thermonuclear war, chances are it would not be able to re-form without easy access to abundant fossil fuels.

Those guys are crazy, not optimistic.