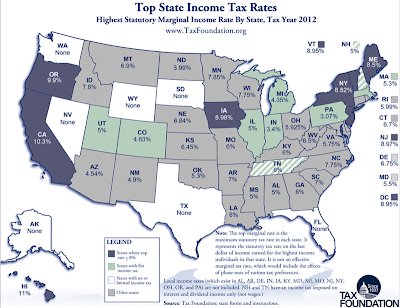 The Tax Foundation summarizes the state of U.S. state income taxes in the map above.

In general, one has to do some analysis of the local economic base and the alternate sources of revenue tapped by states on a case by case basis looking at each state as a coherent whole that has its own particular reasons for what it is doing, to make sense of the results in particular states.

Seven states have no state income tax (Florida, Texas, South Dakota, Wyoming, Nevada, Washington and Alaska). New Hampshire (5%) and Tennessee (6%) have a flat income tax rates on interest and dividends, but not on other income.

Low income tax rates are made possible in some states by revenues from the dominant industries in the state. In Nevada, gambling funds state government. In Alaska, oil revenues are so great relative to the state's population that the state actually passes out money to people who are willing to live there. I suspect, but do not know, that resource based revenues make low income tax rates possible in North Dakota, South Dakota, Texas and Wyoming, although a low cost of government in some or all of those states may help as well.

The outlier states simply have a different package of taxation that focuses on taxes at the business entity level rather than the individual income level.

New Hampshire's example in claiming to lack sales and income taxes, while technically true, is a bit deceptive. Some of the money it needs it secured with a state property tax (something very few other states have and that clearly isn't a sales or income tax), a 0.75% real estate transfer tax (which is a sort of sales tax), an 8.5% tax on "business profits" (not just corporate profits but profits from all businesses) and a 0.75% "business enterprise tax" computed on a tax base of all compensation (e.g. wages), interest and dividends received by a business. Throw in the 5% state tax on dividends and interest, which covers a lot of the income not captured by the business profits tax, the business enterprise tax, and the real estate transfer tax, and considering differences in income mix at the top and bottom of states with progressive marginal tax rate systems, and the sources of New Hampshire's taxes look less different from other states - New Hampshire's exceptionality has a healthy dose of marketing involved.

Tennessee's business tax is quite similar in structure to the one in Washington State's business and occupation tax (and a gross receipts tax in other industries) They tax the gross with varying rates by industry to reflect different typical margins in different industries. Tennessee also has a franchise tax on the assessed value (at a 0.25% rate) on all business property (tangible and real), and a 6.5% excise tax on entity level taxable income for all forms of entities similar to New Hampshire's business profits tax. Tennessee also has a 5.5% sales tax on food which most states exempt from sales taxation.

A quick glance at Arizona's tax laws suggest that it follows a similar model to Washington State and Tennessee, but with a greater emphasis on natural resource severance taxation to supplement its fairly low marginal income tax rates.

Florida has a business profits tax on all business entities except sole proprietorships, of 5.5%. It also has fairly high sales taxes.

I don't know what alternate revenue sources Florida uses to fund its lack of income taxes, and Arizona uses to fund its relatively low state income tax. But, one clear motive for Florida, Nevada and Arizona to keep income taxes low is to compete for relocating seniors who want to withdraw retirement funds accumulated in high tax states in states where those funds don't face state and local taxation.

Colorado's political environment may be the result of similar motives - resorts catering to the affluent are a key element of our economy and we want affluent people to relocate to them because taxing their incomes at 4.63% rates beats taxing no income at all if they don't relocate to Colorado, and has pretty low levels of state spending relative to its affluence on public services like education, as well as a fairly balanced mix of taxes with middling to high combined state and local sales taxes (Colorado is the exception in having more local than state sales taxation, which many localities have opted for in order to secure lower rates of property taxation).

Michigan, Indiana and Pennsylvania are all Rust Belt states who have hemorraged so much population and economic vitality, that they feel compelled to reduce taxes to try to attract jobs, even though this policy does not appear to have actually attracted jobs. Michigan, Indiana and Pennsylvania also have local income taxes, which suggests two things. First, income tax rates at the state level are low, in part, because some of that tax base has been ceded to localities in an instance of intrastate federalism. It also suggests that the economic incentives driving for income taxation are quite different in different parts of the state, with parts of the state fitting a low income tax profile (like Northern Michigan and Western Pennsylvania and rural Indiana) not having very high local income taxes and those with a high income tax profile (like Philadelphia and Oakland County and Indianapolis) having higher local income taxes.

In states with high top marginal income tax rates, in contrast, there does seem to be a common thread. Consider, by top tax rate, Hawaii (11%), California (10.3%), Oregon (9.9%), New York (8.82%), New Jersey (8.97%), and Washington D.C. (8.95%). What all of these states have in common is a significant number of high income workers for whom working outside the jurisdiction is simply not a viable option. If you are in an industry centered in New York City, or San Francisco, Silicon Valley, Los Angeles or Washington D.C., you must, for all practical purposes, work in that state and subject yourself to that state's income tax rates. Top rates in Connecticut (6.7%), Delaware (6.75%), Rhode Island (5.99%), Virginia (5.75%), Maryland (5.5%), and Massachusetts (5.3% flat rate) aren't low either and have some of the same characteristics.

Iowa whose top marginal income tax rate is 8.98% and also has local income taxes is something of a puzzle. Perhaps, its economy is so far driven that its high income farmer citizens too are bound to the land and can't escape state income taxes while maintaining their livelihoods, although it is not obvious how Iowa differs from other farm states in that respect.
Posted 7:51 PM
Email ThisBlogThis!Share to TwitterShare to FacebookShare to Pinterest
Tags: Economics, Income taxes, State Budget

The high sales tax here really irks me, and of course is highly regressive with respect to income.

Also, the City and County of Denver does have a local income tax -- the OPT tax, which as a "head tax" is the most regressive of all.

The OPT is as you say, a "head tax" rather than an income tax. An income tax is a function of income, a head tax is not.