The main barrier to a world full of electric cars that replace those with internal combustion engines (ICEs) is battery technology.  Electric cars perform every bit as well or better than conventional cars and we know how to make them.  But, their batteries have limited range (a third to half of the range of a conventional automobile with a full tank of gas) because they have low energy density relative to gasoline and diesel fuel (i.e. they are heavy for the amount of energy they carry), can take a long time to recharge (often overnight without special equipment that is only available in select locations), they are expensive ($12,000 to $15,000 per vehicle, about a third of the total cost) and they are often environmentally harmful to manufacture.

There has been progress.  The cost of an electric car battery per unit of energy stored has fallen by a factor of eight from 1991 to 2005, although almost all of that improvement took place from 1991 to 1998.  The energy density of batteries in 2005 was 2.35 times what it was in 1991 and that improvement has not leveled off so starkly.

If these gains repeated themselves over another fifteen years, the internal combustion engine vehicle would cease to exist as anything other than a museum piece and in niche conditions.  But, existing electric car battery technologies are mature enough, and the relevant fundamentals of chemistry and physics are well enough understood, that additional huge breakthoughs of that magnitude seem like a long shot, particularly on the question of energy density (there may be more room to find cheaper anode and diodes with comparable performance than they is to find them with dramatically better performance at any plausible price).

Right now, we are close to economic boundary conditions between a variety of automobile fuel and engine technologies that leaves us poised beween hybrid vehicles and conventional vehicles, with the most sensitive factor being the cost of gasoline.  An oil production boom in the United States made possible with fracking has keep gasoline prices relatively low.

But, in all likelihood, gas prices will rise to the $5.00 to $6.00 a gallon where plug in electric hybrids make sense more rapidly than battery prices will fall by the 50% or so it would take to make anything other than a hybrid vehicle much more attractive.  Battery prices are moving down much more slowly than gasoline prices are moving up, in medium term time frames.

Indeed somewhere in the $8.00 to $16.00 a gallon real dollars gasoline price range, it starts to make sense to reengineer our urban landscapes and commercial logistics systems to shift more long haul freight and passenger service to electric rail, to concentrate housing more centrally, to develop systems to switch out batteries rather than recharging them in place, and so on - electric cars would be used for short run local transportation where they excel, rather than long haul highway trips where their lack of range is a problem.  We would return to street car cities with electric vehicles on existing city streets instead of trollies.

Of course, an entirely new kind of battery could easily be game changing.  But, that advance hasn't been made so far and would probably require a switch to some radically different technology like moving from conventional chemical batteries to supercapacitors or flywheels. 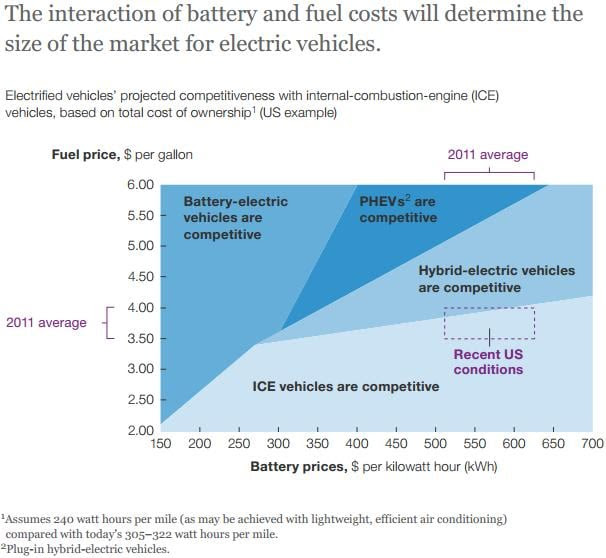 New developments in extracting hydrogen from plant matter for use in fuel cells could lower the cost of fuel cell technology and thus make it a viable alternative to batteries. Current fuel cells use an expensive platinum catalyst that drives their cost to significantly more than the cost of a battery per kilowatt hour stored. Fuel cells have performance comparable to that of gasoline vehicles, but are far more expensive.

Electric cars are much in nowadays,but the important advantage of dry batteries over gas-powered engines is the lower cost of
the fuel -- that is, electricity for EVs and gas for the internal combustion engines.