The combined tax burdens at the federal, state and local level in the United States are slightly progressive (on average).  The pain of the fiscal cliff tax increases after the deal struck in Congress a few months ago, is shared quite evenly by all income groups.

State and local taxes in the United States are mildly regressive, on average, but the federal tax code's progressivity largely counterbalances that effect.

It is also important to recall that these are national averages of state and local tax burdens. In general, state and local taxes in the South are more regressive and in the Northeast are more progressive.  The combined tax impact in the South is probably either flat or slightly regressive.  The combined tax impact in the Northeast is more meaningfully progressive.

Also, of course, these numbers are only averages.  Some people pay more than average for their income class, while others pay less.

In general, the federal tax code favors people with unearned income significantly over those with earned income.  State and local tax codes largely amplify this effect, garnering much of their revenue from sales taxes on personal consumption (effectively taxing the income earned to make those purchases through a back door while excluding most services and in many cases excluding grocery store food), and property taxes on real estate - while taxing income from investments not spent on real estate or goods for personal consumption quite lightly.

The famed "one percenters" pay only about ten percent more in taxes than they would if the overall tax burden were perfectly flat.  Those in the next four percent of income pay about 7% more than they would under an overall flat tax system.  These families pay an average of 32% to 33% of their incomes in taxes.  The "rich" one percenters pay only slightly larger share of their income in taxes than the upper middle class in the next nineteen percent of families, despite earning four or five times as much on average as those at the upper end of the upper middle class range.

The bottom 60% gets some relief in the federal tax code which more than makes up for them paying more than a flat tax share of state and local taxes, but still pay less than a third less than the flat tax amount.  These families pay 19% to 27% of their incomes in taxes on average.

Overall, Americans pay 30% of their incomes in combined federal, state and local taxes, with only poor and working class families in the bottom 40% of the income distribution paying more than +/- about 10% from that value.  The combined tax burden in the U.S. as a percentage of personal income is quite low compared to most of its first world peers. 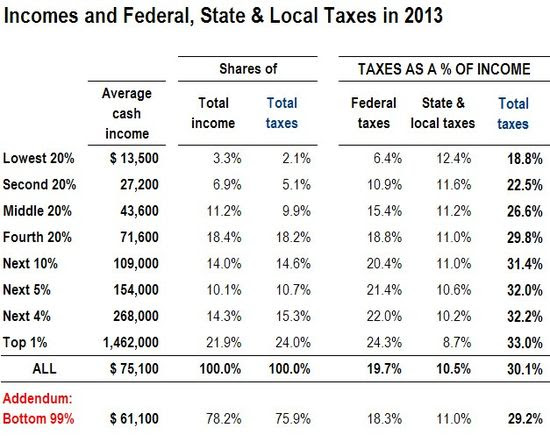 The Realm Of Posssibility

It wouldn't be hard to provide significant tax relief to the poor and working class with only modest tweaks to the tax burdens of the affluent.  But, the problem of increasingly widening pre-tax income distributions is far more intractable.  And, major middle class tax relief is not so easily accomplished because they contribute far more to public revenues.
Posted 5:26 PM
Email ThisBlogThis!Share to TwitterShare to FacebookShare to Pinterest
Tags: Federalism, Local Taxes, Social Class, Tax

The aggregate federal, state and local tax burden in the U.S. is the third lowest in the OECD behind only Mexico and Chile.