A Cocaine Addiction Toggle In Rats

Researchers can now, not only cure cocaine addition in rats that had received gene therapy, they can also cause non-addicted rats that have received the gene therapy to become cocaine addicts, by directly manipulating neurons in their brains with lasers. (Source for linked story: B.T. Chen et al. Rescuing cocaine-induced prefrontal cortex hypoactivity prevents compulsive cocaine seeking. Nature. Vol. 496, April 4, 2013.)

The study revealed what kinds of brain changes (epigenetic changes that increase the current required to trigger certain neutrons) in what part of the brain (the prelimbic cortex) are associated with compulsive cocaine addition and how that could be modified. 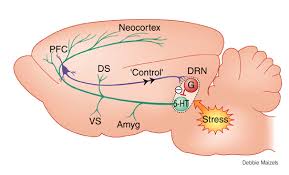 The ventromedial prefrontal cortex (PFC) in the rat brain illustrated above includes the infralimbic and prelimbic regions in the rat brain.  In this study the prelimbic part of the PFC was implicated in cocaine addition.  Source: Figure 1 of Controlling stress: how the brain protects itself from depression Trevor W Robbins Nature Neuroscience 8, 261 - 262 (2005).

The details of the research also highlights the fact that even regular cocaine use does not make everyone an intractable addict.  About 70% of the rats could kick the habit without having lasers zapped at their brains.  Most people either believe that a single use of cocaine turns almost everyone who uses it into an instant addict, or believe that anyone with enough willpower can kick the habit.  The reality is that neither is true.  Most moderate drug users of cocaine and other addictive drugs can kick the habit with enough motivation.  But, some drug addicts can't, even when powerfully motivated to do so.  Different people are more or less prone to addiction and other research shows that this propensity is one of the most strongly hereditary behavioral traits known to exist.

The methods used in the most recent study described below are fascinating, but have a distinct mad scientist flavor to them.

I've also highlighted the portion of the technique that uses gene therapy, as this key and tricky element of the process is downplayed in the report.  The gene therapy allows epigenetic effects to be triggered with lasers, rather than more conventional means like the ones that give rise to the cocaine addition in the first place.


Scientists know that when certain neurons fire less frequently in the prelimbic cortex, a brain region that handles impulse control and reward-driven behavior, a person’s self-control can decrease. But researchers didn’t know whether using cocaine chronically could make the neurons drowsy to begin with, and whether that sluggishness could also promote drug use in spite of ill consequences.

Billy Chen, then of the National Institutes of Health, and colleagues trained rats to take cocaine. The rats learned to press levers to receive a dose of drug through an IV. After about two months, researchers started giving the rats shocks roughly one-third of the time when the animals pressed the levers. Most of the rats stopped taking cocaine, but about 30 percent continued. These were compulsive cocaine users, says coauthor Antonello Bonci, a neuroscientist at the NIH’s National Institute on Drug Abuse.

Then the researchers sent electric current through neurons in an area of the rats’ prelimbic cortex that links to other brain areas involved in drug-seeking behaviors. Neurons in all cocaine-using rats were less likely to fire in response to the currents than cells in rats that hadn’t taken cocaine. And compared to noncompulsive cocaine users, the compulsive users’ neurons needed almost twice as much current to fire. That means that the long-term cocaine use likely reduced neuron firing, especially in the compulsive users.

To find out whether those sluggish neurons in turn caused the compulsive behavior, the scientists turned to a technique called optogenetics, which uses light to turn neurons on or off. The researchers injected the rats with viruses that inserted light-responsive molecules into the lazy neurons. When the researchers used lasers to stimulate the neurons in the compulsive rats, the rats pushed the levers one-third as often. The same experiment on rats that hadn't been shocked had no effect.

The researchers then reversed that experiment, using lasers again but this time turning off the neurons in the non-compulsive users. Those rats started pushing the levers for cocaine almost as frequently as the other rats had.

This process, even if it could be replicated in humans, is not a trivial thing.  It involves both targeted gene therapy and brain surgery. Gene therapy in human is largely experimental even though its use for research purposes in animal tests is well established.  Brain surgery is always an expensive and high risk treatment tool.

There are positive aspects of this particular treatment and make the risk and expense worthwhile for a condition as potentially devistating as a virtually impossible to overcome kind of cocaine addition.  The treated area of the brain does not actually have to be cut or otherwise mutilated.   The treatment might be reversible if the wrong brain tissues are accidentally triggered on or off.  And, this is a precision manipulation of only a tiny part of the brain in a case with a well understood mechanism.  In contrast, many forms of biophysical mental health treatment seem to work, but physically maim large areas of brain tissue in an irreservible way (e.g. lobotomy), and/or have a mechanism that is ill understood (e.g., lithium treatments, lobotomy and electroshock therapy).

On the other hand, physical manipulation of brain tissue that could cause harm to other parts of the brain might be necessary to allow the virus injection and laser to be placed properly, and this would be a very expensive treatment in humans.  Also, it isn't obvious that future use of cocaine couldn't reverse the process and cause a relapse.

One also wonders, in passing, what diabolical use might be put to a technique that could cause drug addition before someone even uses the drugs.  Intentionally addicting someone to a drug is already used as a control technique in the human trafficing trade.