Law Journalists Aren't So Hot At Math Either

The saying goes that lawyers become lawyers because they are bad at math (obviously, not true in my case).  It turns out that the maxim holds true for law journalists as well.

Law blog "Above the Law" is in my sidebar and often a good read.  But, a recent story of theirs, based upon this American Bar Association source, claiming that 95% of U.S. lawyers in private practice are in firms of 20 lawyers or less was not impressive.

The American Bar Association source that they relied upon was accurate, but the chart that Above The Law relied upon states that 95% of private U.S. law firms have 20 lawyers or less, said no such thing. The chart they reproduced in their story is this one: 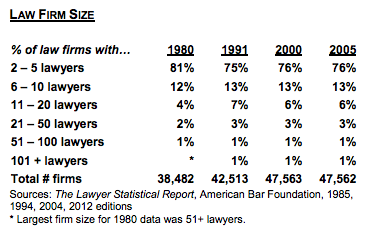 Based upon it, they said: "So 95% of attorneys in private practice work at firm with 20 lawyers or fewer."

The obvious tip off that they had it wrong, even if you were focusing on the numbers instead of the words in the chart, was the bottom line.  Yes, there really are more than 47,562 lawyers in private practice in the United States today (there are actually 1,300,705 lawyers licensed in the United States as of 2015 and there were more than 700,000-800,000 lawyers when I was in college and wrote a report for a class on the emergence of large law firms in the legal market).

Meanwhile, a chart immediately above it on the same page of the source states that only 74% of lawyers working in private U.S. law firms work in firms of 20 lawyers or less.  In fact, 49% of all lawyers in private practice are sole practitioners.

This is still a lot of lawyers in "Small Law", but not nearly as impressive as the inaccurate statement that they make in their story.
Posted 3:08 PM
Email ThisBlogThis!Share to TwitterShare to FacebookShare to Pinterest
Tags: attorneys, bad reporters, blogs, Humor, Mathematics, Media

"firms of 20 lawyers or less"
FEWER
Good at math and not so good at English.