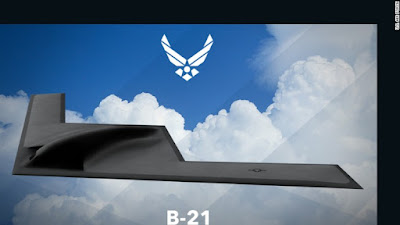 The Air Force has unveiled the appearance of its new long range strike bomber, the B-21, which closely resembles and would have basically the same mission as the existing B-2 bomber (the most expensive warplane ever built, mostly because its run was cut short to 20 units due to cost overruns causing R&D costs to be allocated over far fewer units than planned).  It is slated to enter service in the mid-2020s, although at least some delays are almost inevitable in any major military procurement program.

The B-21 has been rumored to have stealth capability, to carry nuclear or conventional weapons, abd to be "pilot optional".  The Air Force is hoping to avoid cost overruns and delays by sticking mostly to "existing and mature technology."


When Northrop Grumman won the contract to build the B-21 last year, Defense Secretary Ashton Carter said it will allow the U.S. to "project power across the globe now and into the future," calling it a "strategic investment for the next 50 years."

Long term, the idea is for these planes to replace Air Force B-52 bombers, which have been flying for more than half a century -- and eventually the B-1 bombers, when they retire sometime in the 2040s.

Engineering and development costs are estimated at $21.4 billion (in 2010 dollars) over the entire life of the program.

If the projected run of 100 planes is built, the total cost is estimated at $511 million 2010 dollars each, about $300 million each to build, and the balance for R&D up front.

The previous two efforts to replace the B-52, first with the B-1B swing wing supersonic bomber, and then with the B-2, have not been great successes.  But, both of those projects don't really offer the basic "transport bomber" replacement for the B-52 to serve theaters where air superiority has already been achieved at a moderate costs.  The Navy's P-8 patrol aircraft is a closer fit to that role.

The 100 plane projection assumes almost 1-1 replacement of the existing long range bomber fleet. But, it isn't obvious that this is necessary.  The B-52 fleet size was built around assumptions from the days of "dumb bombs" when half of dozen to a score of bombing sorties might be necessary to hit one target on average.

Now, something like 98% of the guided munitions which are deployed by U.S. fighter planes, bombers, ships, missile submarines, helicopters, drones and artillery batteries hit their targets. The 5" main guns of U.S. Naval ships and the dumb ordinance used by U.S. Army Howitzers and mortars when smart munitions aren't used instead, and some 30mm cannons on the A-10 and A-130 and some ships are the only heavy "dumb" ordinance still in use and as prices for guidance systems fall (most of the $20,000+ cost of smart munitions and almost all recapture of R&D costs) the used of "dumb" rounds is expected to dwindle further.

The long range of the modern long range bombers also reduces the need to base bombers in every theater of action where they might be needed and they can be relocated from one theater to the other overnight, unlike ground based missile batteries, ships and submarines.

While the U.S. military's ground troop capacity has been strained for much of the time since the Iraq War, there has never been a time when the U.S. has had anything other than an extravagant excess of bombing assets, and the lion's share of bombing by U.S. forces and their allies since the Gulf War has taken place in half a dozen or so intense campaigns lasting just a few weeks or months.

This isn't to say that a future war couldn't be more demanding on U.S. bombing assets, but the kinds of campaigns that would call for those kind of resources, such as large scale conventional wars with China or Russia on their home territories, aren't wars that would make sense to fight with nuclear missile armed foes.
Posted 10:37 AM
Email ThisBlogThis!Share to TwitterShare to FacebookShare to Pinterest
Tags: Military, Technology