Your Religious Beliefs Are Predictive Of Your Partisan Leanings 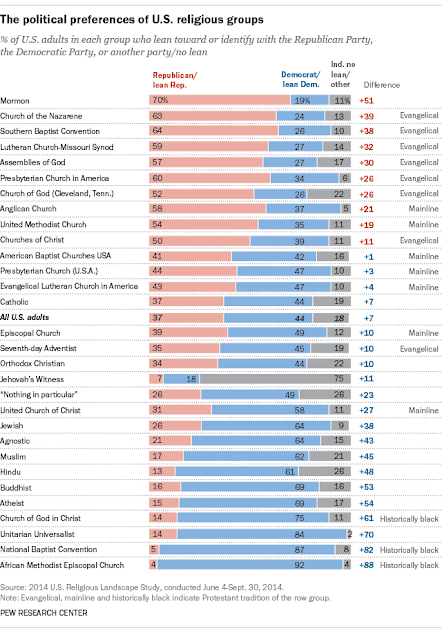 Data above, which was collected by the Pew Foundation, recounts the partisan political preferences of Americans by religious denomination (Hat Tip to Fully Myelinated). The overall pattern is predictable, although there is some overlap at the edges.

From most Republican to most Democratic the major categories are:

Many of the conservative liturgical Christian denominations split from their mainline counterparts around the time of the U.S. Civil War over the social issues of that day such as slavery and women's righta.

The exceptions are as follows:

* Seventh-Day Adventists, an Evangelical denomination, are as left leaning as Orthodox Christians on average.

* Jehovah's Witnesses , an Evangelical denomination, rates as slightly more left leaning than Orthodox Christians.  But, this is largely a function of the fact that 75% of the conservative Christian denomination does not claim a partisan political denomination and generally does not participate in electoral politics.

Notably, both Seventh-Day Adventists and Jehovah's Witnesses reject much of the liturgical and non-scriptural core of Christianity in favor of Jewish and secular alternatives respectively.  This may be a factor that causes members of these denominations to have a political identity closer to non-Christians.

* The United Methodist Church, a mainline Christian denomination, is well into the Evangelical range.  This mostly reflects its strength in historically conservative rural and small town America, particularly in the South, Midwest and on the Great Plains.

* Two mainline Christian denominations (Episcopalians and the United Church of Christ) are more Democratic leaning than the Roman Catholic Church.

The United Church of Christ and the Unitarian Church, prior to its merger with the Universalist Church in the 1960s to form the current denomination which is a post-Christian one, are the main successor denominations to the established Congregational Churches of New England, many of which were doctrinally Unitarian.  The United Church of Christ is trinitarian, but carries over the liberal leanings of the former Congregational Church.  (Ironically, the Mormon church also has historical roots mostly in New England.)

* The Unitarian Universalist church which is basically post-Christian although a minority of the members of the denomination identify as Unitarian Christians, is more left leaning than one of the three historically black Christian denominations.
Posted 9:05 PM
Email ThisBlogThis!Share to TwitterShare to FacebookShare to Pinterest
Tags: Feminism, Political Identity, Race, Religion