Democrats are puzzled by why Republicans are so angry, while they so a country that has almost completely recovered from the financial crisis and Great Recession that followed over the course of President Obama's administration.

An map from the New York Times showing which counties were and were not economically distressed from 2010 to 2014 sheds a great deal of light on that question. 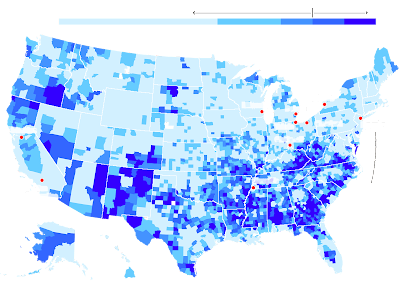 Broadly speaking, the American South and much of the rural American West are awash in distressed counties (in darker blue), while the Northeast, the Midwest and most of the Democratic leaning parts of the American West have pretty much fully recovered (in pale blue).

Economics influence political outcomes.  In good times, people favor incumbents and the politics of hope with Democrats.  In bad times, people favor outsiders and the politics of fear in the Republican party are more attractive.  When the nation is a mish mash split on partisan lines, we can expect a general election in which each party thrives by appealing to its base, rather than one focused on winning over swing voters in purple states.

This also contributes to intra-party disconnects in the Democratic Party.  While much of blue America has recovered, some major Democratic leaning cities marked with red dots, have not.  All are highly distressed and heavily African-American which explains why white and black voters in the Democratic party can feel like they are living in different worlds.  Likewise, in the American South, the Democratic party is overwhelmingly a party whose backbone is made up of African American voters who like the core of the Republican base, mostly live in economically distressed parts of the country that have not yet recovered from the Great Recession.

As a result, white voters in the Democratic Party, who are feeling prosperous, have flocked to Bernie Sanders, who feel safe enough to embrace his hopeful agenda for positive change.  In contrast, black voters in the Democratic party, who have not enjoyed the recovery to a great extent and are more financially distressed, have favored Hillary Clinton, whose more cautious and fearful approach is a better fit to their reality.
Posted 1:02 PM
Email ThisBlogThis!Share to TwitterShare to FacebookShare to Pinterest
Tags: 2016 election, Economics, Financial Crisis, Political Identity, Race, Republicans