Terrorist attacks like the one this week in Brussels are stunning horrific events that we need to make all reasonable efforts to stop. But, it pays to take a moment to get a forest level perspective on the phenomena of terrorism in general, before coming to conclusions about how to address it. 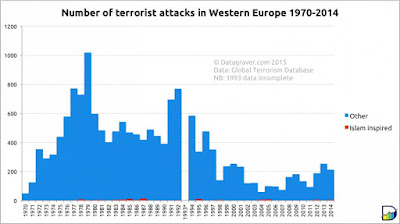 From 1970 through 2014, the small red bars are Islamic terror attacks in Europe, all the rest are groups like the IRA Provos, Red Army Faction and the like which were far more numerous and more deadly than these recent attacks we have been seeing lately.

Islamist terrorism may make headlines, but the overwhelming majority of terrorism in Europe in my lifetime has had its roots in regional autonomy movements and home grown political groups.

The United States has had far less domestic terrorism than Western Europe, but even in the U.S., some of our worst terrorist attacks have been domestic, such as the Oklahoma City bombing: 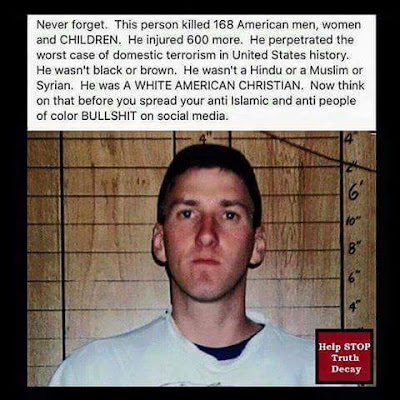 Likewise, most recent Islamist terrorist attacks have been directed at other Muslims, something that U.S. news outlets, due to their audience and sources of news, tends to distort: 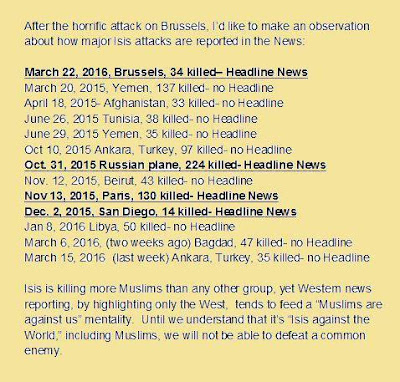 Also, it is important to recognize that terrorism still causes far less harm than crimes committed by people with no coherent agenda or larger organizational ties.  Consider: 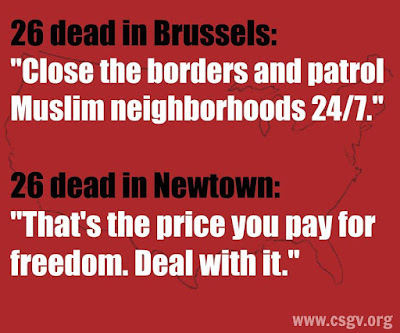 BTW What do you think is needed to be doe to stop the rise of terrorism?. Do you think to control Muslim immigration in some degree is correct?.

First, I'm not convinced that terrorism is "rising". It exists and it is bad and it has captured popular attention, but it is not obviously more common.

Second, Islamist terrorism isn't monolithic. The root of ISIS terrorism is the emergence of ISIS. And, the best solution to ISIS, I believe, is to recognize that ISIS will not die until its people have a viable alternative. We need to acknowledge that most of ISIS territory is forever lost to Iraq and Syria who don't deserve to retain that territory. Then, we need to give that territory to the best alternative Sunni led regime, which in my view is Jordan and gather up a coalition of people to support it.

I do not think that Muslim immigration is an important driver of Islamist terrorism in the U.S. San Bernadino is the exceedingly rare exception that proves the rule. There are millions of American Muslims and Islamist terrorism in the U.S. has not come from members of the main Muslim communities in the U.S. such as the one in SE Michigan or the one in NYC. The mostly Saudi Muslim terrorists who led 9-11 were on tourist and student visas, not as immigrants. The San Bernadino terrorist attack involved one perpetrator who was second generation American, in addition to his new wife. I went to college with lots of Pakistani Muslims who have not the slightest anti-American political tendencies. The Boston Marathon terrorist incident was more nationalist than Islamist in motivation.

Muslim immigration in Europe is also not monolithic. Turkish immigration to Germany is different from Pakistani immigration to the UK is different from Algerian immigration to France is different from refugee driven immigration to Scandinavia. Each of those situations is absolutely changing the character of those nations and leading to some social tensions. Also, Europe's national concept unlike the U.S. is not as nations of immigrants (except perhaps Switzerland). Islamist terrorism may be a minor side effect of high volumes of Muslim immigration in Europe. But, it is not at all obvious that terrorism is a particularly important factor to consider in deciding whether or not to control Muslim country immigration to Europe. Those decisions should pay more attention to the economic and other considerations that led to allowing immigration in the first place in each nation's individual context. Also, Muslim populations are already present in each of the European countries to stay and is effectively irreversible. So, it is more important in Europe to focus on building national loyalty among their Muslim residents, than to limit immigration.

BTW, I don't celebrate Easter. And, its a little hard to get excited about spring when I was in a blizzard yesterday, although that will pass.