We Could Afford Universal Housing Vouchers

If we did nothing to make the [existing federal housing] voucher program more cost-effective — and there is much we could do on this score — expanding housing vouchers to all renting families below the 30th percentile in median income for their area would likely require an additional $22.5 billion a year. The actual figure is likely to be somewhat less, as this estimate does not account for potential savings in the form of reducing homelessness, lowering health care costs and curbing other costly consequences of the affordable-housing crisis.

We have the money. We’ve just made choices about how to spend it. In 2008 . . . federal expenditures for direct housing assistance totaled more than $40 billion, but homeowner tax benefits exceeded $171 billion[.]

Indeed, in cases of full on vagrancy, a "housing first" approach has been demonstrated to save public funds, something an innovative new social development bond program in Denver that will provide housing and services to 250 of its most chronically homeless residents has set out to demonstrate.

A stretch of Denver's Park Avenue near a newly opened day center for the homeless called Samaritan House looks like this: 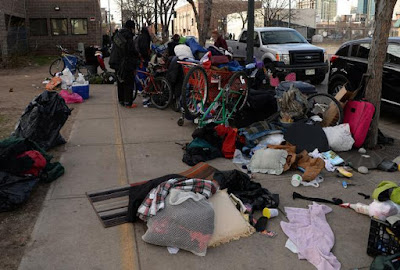 It's absolutely a problem, a biohazard, and a deprivation of the human rights of those who live there. But, that doesn't mean that Denver's short term solution to the problem is a good one.

Next week, Denver will be clearing this all out and will (despite having no obligation to do so) keep the personal property taken in a warehouse for a month so that people whose stuff is taken by the city can claim it. But, this doesn't address the deeper problem that large numbers of people can't afford to live here.

When you've reached the point where camping on Park Avenue is your best options, you don't have a lot of good choices.  Bed bug infestations, shelter rules, and scary fellow occupants lead many people to believe that they're better off sleeping on the streets than in shelters, at least when the weather isn't too bad.  Marshaling funds to pay for a first and last month's rent plus a security deposit can be virtually impossible.  Some people can afford a nasty motel on Colfax Avenue as a stop-gap solution that often seems to last indefinitely, with interrupted nights sleeping in a car or "camping" in a park on a street when cash flow is interrupted, but that isn't a long term solution.

Homelessness and a lack of affordable housing are largely problems of a lack of political will and not costs so great that we can't afford them, or compromises so great that they would ruin our communities if widely adopted.  But, who wants to innovate and attract more down on their luck individuals and families in poverty to their neighborhood?
Posted 1:27 PM
Email ThisBlogThis!Share to TwitterShare to FacebookShare to Pinterest
Tags: Denver, Poverty, public finance, Tax, Urban Planning