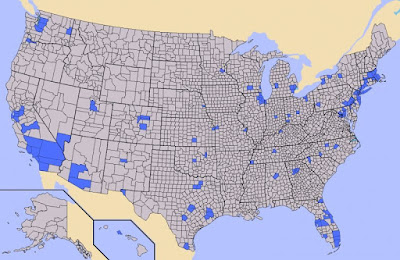 
The United States has pockets of high population density that are home to a majority of its people, and lots and lots of much less densely populated areas.

It also demonstrates rather well that limited land area is not a meaningful limitation on population, either in the United States, or in most parts of the world, at least directly.  There are limits on the amount of food that can be produced on arable land, but the food production footprint of the average person is much larger than the amount of land that the average person needs to live and work in personally.
Posted 6:00 PM
Email ThisBlogThis!Share to TwitterShare to FacebookShare to Pinterest
Tags: Demographic Change, Economics, Urban Planning