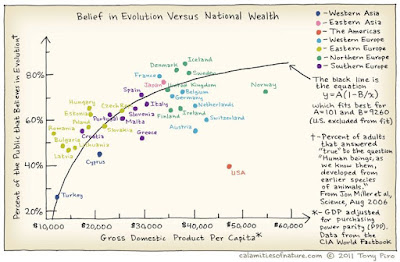 The United States is the clear outlier. But why?


Rather than simply being ill informed, lots of Americans are actively anti-evolution because that is part of the doctrine of Biblical literalist Christianity to which they adhere.

This branch of Christianity is largely absent from the other countries listed, many of which have or did have in recent history, established Roman Catholic, Orthodox Christian, Lutheran, Anglican, Calvinist or Shinto state religious denominations, none of which emphasized this particular aspect of Biblical literalism.

The only Islamic country on the chart, Turkey, is even less evolution believing than the United States, and while that could be a product of national income, if it had been excluded from the fit as an outlier as the United States was in the fit, because it is religiously confounded (many branches of Islam also have issues with evolution theory), the relationship between evolution belief and GDP per capita would be far more linear and far less extreme.

Similarly, including poorer East Asian countries than Japan, where there is not a strong anti-evolution sentiment, would also probably blow the curve.
Posted 10:21 AM
Email ThisBlogThis!Share to TwitterShare to FacebookShare to Pinterest
Tags: Economics, Evolution, IQ, Mathematics, Religion, War on Science