Average European And U.S. Unemployment Rates In 2016 By Subnational Regions 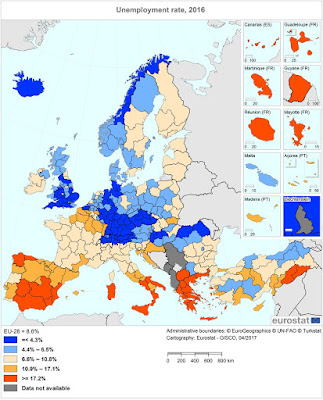 
National boundaries which are presumably associated with economic and welfare state policies clearly affect unemployment rates. Germany's unemployment rate is very low as a result of very good economic policies, while Greece has massive unemployment due to catastrophic mismanagement of its economy. Indeed all of the PIGS (Portugal, Italy, Greece and Spain) are in real economic trouble.

But, deep historical cultural divides, for example, between northern and southern Italy, or between Scotland and England, between former West Germany and former East Germany, and between various parts of Turkey (with Kurdish areas having a particularly hard time) also matter.

One difficult to understand situation is the high unemployment rate in Northern France, which is bordered by lower employment rates in the rest of France on one side and in Germany on the other side.

This also sheds some light on the Brexit vote. Usually, secessionist sentiment is stronger in prosperous regions where citizens don't want to subsidize less prosperous regions. And, the England, where Brexit support was strongest, has one of the healthiest economies in Europe. Similarly, Northern Italy, which has been more prosperous than Southern Italy since the Renaissance, at least, was similarly home to secessionist movements in the 1970s, and Northern Ireland which resisted efforts to join the rest of Ireland during "the Troubles" likewise is more prosperous than Ireland as a whole.

Generally speaking, secessionist inclined Basque Spain and Catalonia have been healthier economically than Spain as a whole, although this is not a trend visible in 2016 unemployment numbers.

Comparable data for the United States at the county level appears below, although it is hard to compare visually to the European data since the color scheme is different.