The Genetics of PTSD

The Study and Its Raw Results

A new genetic study is casting light on post-traumatic stress disorder, which shows much different hereditary patterns in men than in women. (Hat tip to Razib Khan's twitter feed.) 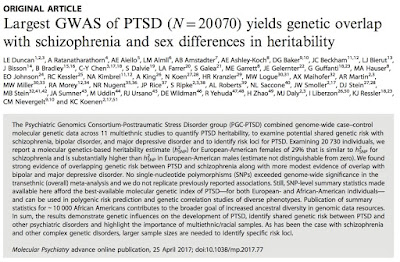 Half of the 20,000+ study subjects were European-American and half were African-American, which is atypical for a large scale GWAS study like this one.  Typically, for GWAS studies, almost all of the risk factor genes were individually rare and small in effect. The genetics of PTSD risk in women appears to be massively polygenetic in a manner that could not entirely inaccurately be summarized as a risk based upon cumulative genetic load.

About 29% of PTSD risk in women is heritable (at the low end of what is typical for many personality traits and much lower, for example, than IQ or schizophrenia or alcoholism). In men, the heritable component of PTSD risk is not significantly different from zero.

The genetic component of the PTSD risk in women overlaps significantly with schizophrenia risk, and more modestly with bipolar disorder and unipolar depression (unsurprisingly since these conditions have similar genetic overlap with schizophrenia in general).

The abstract doesn't provide raw PTSD rates, but my intuition is that most PTSD in men is almost exclusively environmental in cause, while women experience environmental events that trigger PTSD in people who aren't especially susceptible to PTSD at much lower rates. Therefore, PTSD associated with high vulnerability to events that might not cause PTSD in the average person is statistically discernible in women, but vanishes into the statistical noise in men, even though excessive vulnerability to marginally PTSD inducing events in men may actually be present at similar rates in men as in women.

On the other hand, the particular association with schizophrenia, which makes some sense given that PTSD is typically defined as experiencing trauma-like reactions in circumstances where the trauma causing event is no longer present, may alternatively suggest that these genes reflect how "grounded in sensory experience" as opposed to being vulnerable to having internal neurological processes overwhelm one's senses a person's nervous system is.
Posted 12:04 PM
Email ThisBlogThis!Share to TwitterShare to FacebookShare to Pinterest
Tags: genetics, Mental Health, Personal Conjecture, Psychiatry, Psychology