Time For A DOD RFP 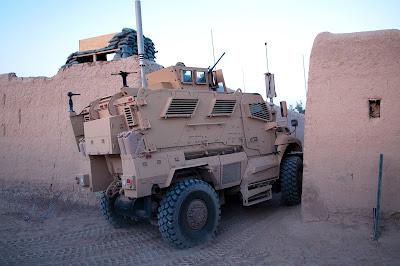 
U.S.-backed forces in Iraq have launched an offensive to reclaim the last ISIS-held districts in Mosul, according to The Wall Street Journal. The assault on the outskirts of the western part of the city started Saturday. The militants are expected to put up one last fight before coalition forces move in.

Iraqi troops will have to do battle on foot because the armored vehicles are too big for Mosul's narrow streets and back alleys. The western part of the city is still filled with about 200,000 civilians.

From here (emphasis mine).


Before spending billions of dollars inventing the world's most expensive warplane or the latest and greatest new frigate, maybe the R&D folks in the U.S. defense industry should start listening to what the troops on the ground urgently need yesterday.

The U.S. Army does have a Mobile Protected Firepower program with the general goal of developing a lighter armored vehicle to support infantry, although the U.S. Army's idea of light (a 19-28 ton air liftable light tank) and what is actually needed to be light enough to be useful in conflicts like the Battle of Mosul, may be two different things. The smallest models of MRAPs in the U.S. inventory are about 8 feet wide. But, this is apparently too wide to get the job done in urban combat in places like Mosul. The original Humvee was 7 feet and 1 inch wide, was unarmored and even with armor was vulnerable to IEDs and too wide for practical use on many narrow streets and alleys.

Sometimes, what U.S. troops and their allies need is not a biggest in its category maximally lethal vehicle, which may be hard to deploy, but a more proportionate response to the current military necessity. Their is a time and a place for a 70 ton heavy tank designed to destroy enemy tanks, but there is also a time and a place for an armored car that could provide troops better protection in urban warfare against light infantry forces in environments full of narrow streets and alleys.

I am fairly certain that our engineers and scientists could come up with armored vehicles that could operate in the narrow streets and back alleys of Third World cities if they put their minds to it, with existing technology, and with enough political urgency and funds, they could probably do so in a matter of months, not years or decades.

There is no reason that a light MRAP or remotely controlled armored unmanned ground vehicle that is less than 6 feet wide with armor sufficient to protect against pretty much all of the small arms insurgents might have at their disposal and considerable firepower couldn't be developed in short order. Small armored bulldozers to clear obstacles are needed as well as armored vehicles.

For example, India has a small armored car, the A-TAC, debuted in 2010, which would be an improvement over infantry walking down back alleys with no protection other than their flak jackets: 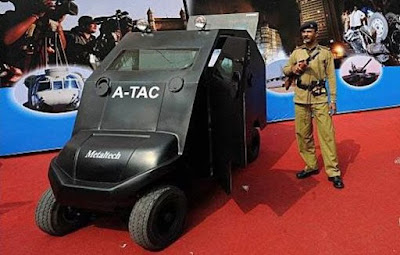 The battery-powered Anti-Terrorist Assault Cart (ATAC) can carry two fully-armed soldiers or security officers along as is traverses narrow indoor corridors and rides service elevators . . . . The $45,000 vehicle also boasts bullet-proof windows that can survive grenade blasts, according to manufacturer Metaltech Motor Bodies Pvt Ltd. Its design was inspired by the 2008 terror attacks in Mumbai, India where Islamist gunmen held off Indian commandos for 60 hours inside two luxury hotels. The final casualties included 17 security personnel among the 166 people killed in total.

Four firing ports would allow the armed driver and rider to fire at enemies from the safety of their vehicle, and could possibly offer more protection than a bunker shield carried by SWAT or elite police units. . . .

Each car can run for about six hours on a single charge and speed along at 15 miles per hour (25 km/hr). That sounds about right for patrolling stadiums or airports; but don't expect to take one of these out for a run along the highway.

In the rubble and obstruction filled streets of urban combat zones, troops may need something less like the armored golf cart above designed for indoor use, and more like an armored all terrain vehicle, like the fictional one depicted below (from the 2009 GI Joe movie). The U.S. Forest Service defines an ATV as a vehicle which, among other things, is no more than 50 inches wide (i.e. 4 feet, 2 inches). 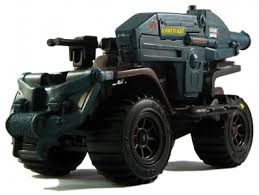 Real world versions (really just kits to adapt an ATV for police SWAT team use) are underwhelming but show that the concept isn't entirely vaporware: 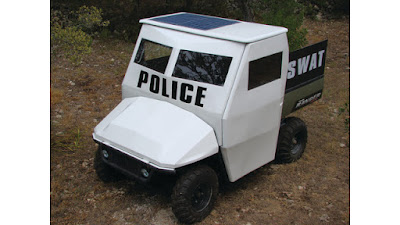 Another option would be something like this Russian remote controlled mini-tank with a 30mm canon:

Another concept would be a remote controlled variation of a German World War II half-track motorcycle outfitted with a machine gun turret and perhaps a small compliment of Navair Spike missiles that cost about $5,000 each and weigh about 5.4 pounds each: 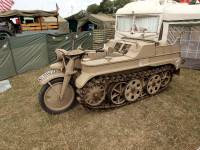 Or perhaps a modernized version of the French Panhard 178 that entered service in 1935, which was 6 feet, 7 inches wide: 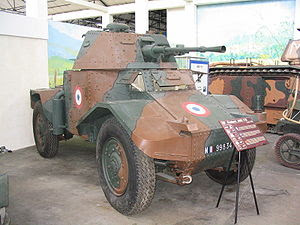 Or perhaps something like Japan's Type 97 Te-Ke light armored car of the 1930s which was just 5 feet, 11 inches wide: 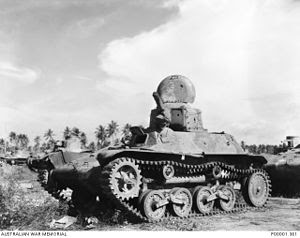 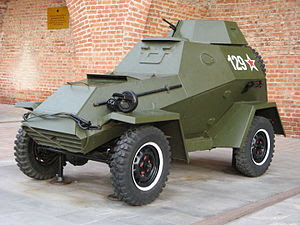 Or like the British WWII and post-WWII Humber Armored Car which was 7 feet, 3 inches wide: 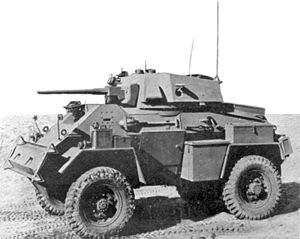 Or even an updated version of the German armored motorcycle called the Panzerbike: 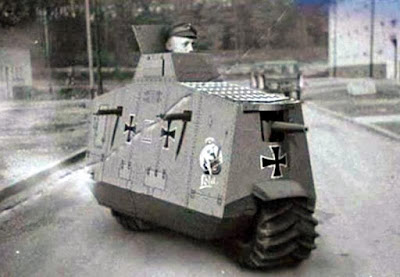 The point, of course, is not to say that we should restore 1930s and World War II military designs or armored golf carts designed mostly for indoor SWAT team type applications to the urban battle fields of the Third World. Instead, it is to demonstrate, through proof of concept via armored vehicles actually used in combat with technology no greater than exists today, that it is possible to design and build armored vehicles for use in narrow roads and alleys that could significantly reduce casualties of U.S. allies in current wars and U.S. troops in future wars.