A DW-NOMINATE score, compiled by Voteview, a widely respected bipartisan resource for political scientists, is about as objective a rating of a member of Congress on a liberal (negative) to conservative (positive) scale based upon their voting record. Candidates who have not served in Congress, such as Buttigieg, Steyer, Bloomberg and Trump don't have one.

I've edited the excerpt above from a June 1, 2019 post at another blog to exclude candidates who are no longer in the running.

Joe Biden's DW-Nominate score when he left the U.S. Senate during the 2009-2011 session of Congress (the 111th) was -0.314, which was to the right of Warren and Sanders, and to the left of Gabbard and Klobuchar.

I don't like a lot of details of Biden's political record - he has a track record of being a late adopter of the correct position on emerging political issues. I think he is a poor campaigner, who is very much showing the negative signs of his advanced age and temperament. So, he is near the bottom of my list of preferred candidates. And, I don't think he is capable of unifying the party and rallying the base in the general election. But, he isn't as conservative within the realm of Democratic members of Congress as many people (including me) tend to portray him.


It is safe to say that Donald Trump, as measured by his actions while in office, is more conservative than anyone in the Democratic party primary race, notwithstanding the fact that he is not an orthodox Republican conservative by the standards of the last few decades, and may not be sincere in his beliefs based upon his earlier expressed views.

This leaves the question of how to compare the liberal-conservative ideologies of Pete Buttigieg, Tom Steyer, and Mike Bloomberg, who never served in Congress, to those who did. The image below, which doesn't disclose the basis for its position assignments and is, in my view, misleading in where it places the "zero" in its chart, nonetheless represents one effort to define the candidates ideologically. 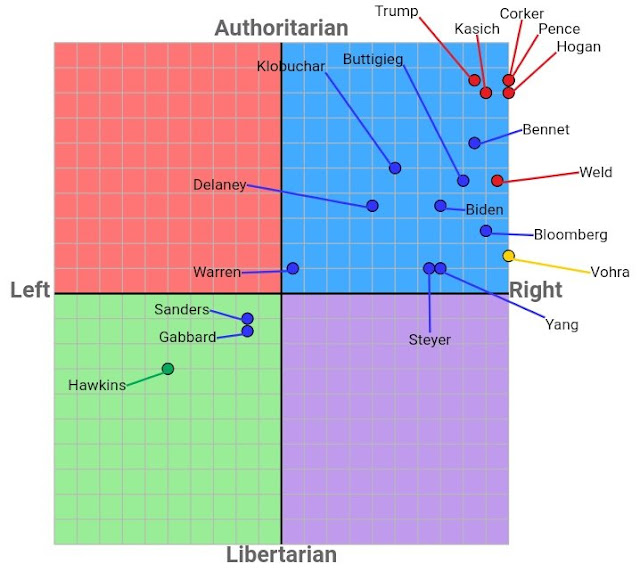 Bloomberg is, I think, accurately, rated by  this chart as more conservative on economic issues than anyone else in the Democratic Party political nomination field. I also think that he is placed far too low on the "authoritarian" v. "libertarian" scale, particularly given his signature "stop and frisk" policy as New York Mayor, and his not very old extremely anti-marijuana statements. Bloomberg is certainly more authoritarian than Senator Bennet from Colorado who recently dropped out of the race, a Senator whose whose voting record in the U.S. Senate is slightly to the right of Klobuchar.

How Steyer and Buttigieg compare to Biden, Gabbard and Klobuchar in terms of political ideology is less clear. I also don't think you can entirely divorce ideology from personal identity in making these determinations.

Based upon where he is polling strongly and weakly, Tom Steyer, is perceived as moderate to conservative within the Democratic field. He is definitely to the right of Warren and Sanders, as is Pete Buttigieg. He is definitely to the left of Bloomberg and Trump, however, as its Pete Buttigieg. His policy positions and history of support for candidates and ballot issues, show him to be roughly in the middle of the range of Democratic Party elected officials. Generally speaking, Tom Steyer is somewhat more liberal than Joe Biden.

The plot above, which isn't very accurate, suggests that Buttigieg is to the right of Klobuchar and Biden, and to the left of Bloomberg. It also suggests that Tom Steyer is to the left of both Biden and Buttigieg (although this is problematic because its relative placement of Klobuchar and Biden is inconsistent with their respective Congressional voting records and it shows Tom Steyer as much less authoritarian and only slightly more economically conservative than Klobuchar).

Buttigieg is a leading candidate, neck and neck with Sanders in delegate count after Iowa and New Hampshire, and not doing dismally in the polls otherwise. So, a better measure of his ideology would be desirable. Generally speaking, his positions are typical of the ideological middle of Democratic party elected officials. I would consider him to be more liberal that Joe Biden and also more liberal than Tom Steyer, who has taken clear positions on a narrower range of issues than Buttigieg. Personal identity factors pull him to the left relative to Tom Steyer and Joe Biden.

We have, running mainstream candidacies for President in 2020, from most liberal to most conservative, with gaps where there is a large difference in ideology between adjacent individuals:

The Colorado Sun has more https://projects.coloradosun.com/?fbclid=IwAR2Y7a5bEVWbx2MJQZkcnApjsOS0i_fgJFAXpvDDKmcEdKTd4QKxccHxOu0