The official results and mainstream media results are delayed due to snafus in the data assembly system at the Iowa Caucuses tonight. But, the Sanders campaign has released their internal results which are the best publicly available data. If accurate, the results are:

Very early results (1.87% reporting), that were later withdrawn, had Sanders in first place, followed by Warren, Buttigieg, and Klobuchar, with Biden in 5th place, and no one else making it into the final round, with the percentages all being roughly similar to those shown above. These are broadly consistent with the Sanders press release above, although they aren't identical.

This is a very poor showing for Biden, in a state where he is supposed to be strong, in this predominantly white, conservative leaning, older than the national average state. Even in the first round vote, Biden couldn't secure even one in seven caucus attendees as supporters in either of the available data releases.

The Iowa Caucuses are to be followed in short order by the New Hampshire primary, which should be a Sanders stronghold. And, a first place finish twice in a row should boost Sanders in subsequent races, while impairing Biden going forward, relative to past polling.

The top three gained percentages from non-viability (a 15% per caucus threshold) and collectively won more than 75% of the final vote, while the others lost ground, as mathematically expected for candidates above and below the 15% threshold in the first round.

Buttigieg gained the most ground from the first round to the final round, which suggests that he has the most to gain from other candidates dropping out of the race. But, the viability cutoff didn't change anyone's rank order.

Bloomberg will apparently not appear on any ballots until Super Tuesday in March, when Colorado will vote.

I am, weakly, leaning towards Warren at the moment, but mostly would prefer any nominee other than Biden, who in my opinion is a very weak general election candidate, despite strong early polls due to name recognition and his association with the Obama administration. 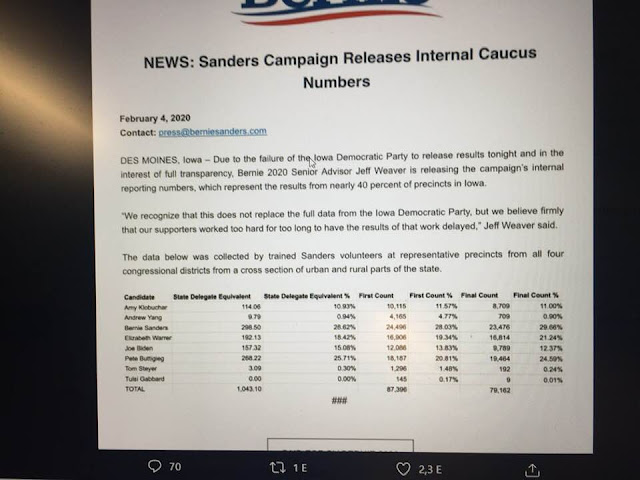 A poor showing for Biden.
A total clusterfuck from the the people in charge.
Iowa - never again.