I am struck by how much U.S. life seems to be proceeding on a business as usual basis when immense upheavals have defined recent history in so much of the globe, even though I am reluctant to use this to "normalize" Donald Trump's unprecedented missteps.

But, even in the U.S., a series of natural disasters and ineffective responses to them in Puerto Rico have led to sustained malaise in that U.S. Commonwealth, and there are been recent epic wildfires in California. 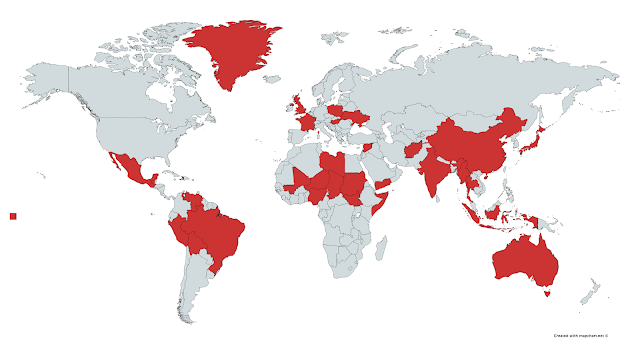 Here are some of the big upheavals around the world for those who haven't been paying attention (and I'm sure I've missed at least one or two, if not more, notable cases):

* Coronavirus originating in Wuhan, China is becoming a global pandemic, killed thousands in China, and caused the nation to go into lockdown and schools to close for a month.

* Coronavirus has shut down schools for a month in Japan. Meanwhile, Japan is in the midst of an intense economic downturn with GDP falling at a more than 6% annualized rate in the last quarter of 2019.

* Months of intense rioting in Hong Kong over efforts by China to strip away its distinct freedoms and democratic institutions.

* China has put more than a million Uyghur Muslims in concentration camps and is terrorizing this entire society.

*  India is facing continuing mass street riots that have bubbled into a full on massacre in Delhi over a Hindu Nationalist government's immigration bill that has been perceived as anti-Muslim.

*  The ongoing insurgency/conflict in Kashmir recently entered as hot and violent phase.

* Myanmar recently had a government led genocidal expulsion of Rohingya Muslims with a mass refugee flight to India.

* Ethnic conflict and more put masses on the streets and led to military brinksmanship in Thailand. This is related to a sixteen year old and ongoing "South Thailand Insurgency".

* Indonesia had a week of mass street protests in September last year across the nation, over governments efforts to eliminate anti-corruption institutions in the country.

* Wildfires and heatwaves across Australia have dramatically disrupted life there and horribly disrupted the ecological balance.

* Antarctica has had unprecedented high temperatures accelerating glacial melting that could trigger rapidly rising sea levels. So has Greenland.

* An active civil war/Saudi Arabian war against Shiites is raging in Yemen.

* The conflict between Israelis and Palestinians seems to have escalated and gotten more violent, mostly due to Israel being more aggressive.

* An active civil war is raging in Syria with Russian backing.

* An active civil war is raging in Libya.

* An active civil war is raging in Somalia which still doesn't really have a functioning and universally recognized central government.

* An active civil war is raging in the Eastern Ukraine with Russian backing.

* Far right movements have surged in parts of Europe such as Hungary and Poland that have shredded democratic institutions and tolerance.

* An active civil war is continuing with Taliban insurgents in Afghanistan.

* There are violent active, verging on genocidal insurgencies and Muslim-Christian clashes across the African Sahel.

* While less violent and disorderly, the United Kingdom has left the U.K. as Brexit happened.

* The economy and social cohesion of Venezuela has totally melted down into hyperinflation and chaos. This has also produced mass street protests.

* Haiti has had recent mass unrest.

* Brazil under a far right President has epic levels of crime and its interior has turned into a free for all of violent self-help of resource industry capitalists in anti-indigenous people oriented actions. Massive wild fires, some intentionally set, have been burning in the Amazon where other forms of deforestation haven't already occurred.

Can you think of any objective measures that could be used for this? Maybe the UN already collects some summary statistics?

with the possible exception of the Coronavirus coming to the usa and hitting millions, it's hard most events on this list directly affecting most americans, unless they are from those regions.

"I am reluctant to use this to "normalize" Donald Trump's unprecedented missteps" An example of objectivity! I am not an American so even more amusing.

"Can you think of any objective measures that could be used for this?"

There are decent measures that can be used for the number and severity of wars pending in any given year. But, those measures don't capture near war-like conditions of gang and cartel violence that prevail in much of Latin America.

There are decent measures of economic health that can be compared, like unemployment, employment, inflation and GDP change rates.

There are measures of disease burdens and of the magnitude of pandemics past and present.

There aren't great "objective" measures of civic unrest, although there are statistics on labor actions that are quite reliable and quantitative.

But, there aren't any objective or widely accepted collective measures of all types of chaos, disruption and unrest globally or by country in a multi-dimensional sense that I am trying to capture in this post.

Essentially, what I am roughly trying to do in this post, without actually running numbers, is to quantify the percentage of the population of the world that is living some place in which there is a level of disruption that will be remembered for a generation or so in that country, at the current time or in the last couple of years, and to compare it to the situation in the U.S., which, while certainly not "normal", is also not quite as disruptive yet.

"with the possible exception of the Coronavirus coming to the usa and hitting millions, it's hard most events on this list directly affecting most americans, unless they are from those regions."

That is sort of the point of this post. The U.S. is, by the standards of this very chaotic moment in global history, not very chaotic at the moment.