Who's going to win in the 2020 election?
How Accurate Is Polling?
The 2016 polls were seriously off, although barely within normal margins of error. This has led to lots of uncertainty which is one factor that has been driving up voter turnout.
Polling inaccuracies are strongly correlated with:
* the strength of third-party candidates (high in 2016 due to Sanders supporters favoring a third-party candidate over Clinton, low in 2020),
* the proportion of likely voters who are undecided (high in 2016, an open race with Trump having no political history, low in 2020 in which Trump and Biden are known quantities), "A week before the 2016 election, around 14% of respondents said they were undecided or intended to vote third party -- and the vast majority of late deciders voted for Trump. This year, there are much fewer.", and
* the volatility of pre-election polling (high in 2016, very low in 2020). Instead, there has been a steady trend of declining support for Trump with him having 31% odds of winning on August 30 that have fallen steadily to 10% in the final forecast 65 days later. "Clinton's lead was smaller throughout, and more unstable. Biden's has never been < 6.6 points."
Pollsters have also corrected their polls where possible to address methodology flaws unearthed in 2016.
These points (and the fact that there has been lots of early voting) are recapped here (the source of the quotes above).
So, I think that, on average, polls are going to be much more accurate in 2020 than they were in 2016.
Another issue that polling struggles with in turnout models. Most polls adjust their raw results based upon what they think the electorate will look like in 2020 which is always an educated guess.
This year, particularly in Southern states and red Western states with a history of voter suppression efforts, COVID-19 facilitated early voting has caused turnout to be very high, for example, in North Carolina, Georgia, Florida, Texas, Arizona and Montana. Turnout models in most polls probably don't fully reflect this reality. So, polls in those states are going to tend to err in the Republican direction since higher turnout almost always favors Democrats.
538 has the most thoughtful and data driven prediction, although it probably overestimates tail probabilities somewhat (while other predictions probably underestimate them).
The Presidential race
The final forecast from 538 is that Biden has an 89% chance of winning and that Trump has a 10% chance of winning (Trump was given a 35% chance in 2016 using essentially the same approach). The Economist gives Trump even weaker chances of winning (about 4%). 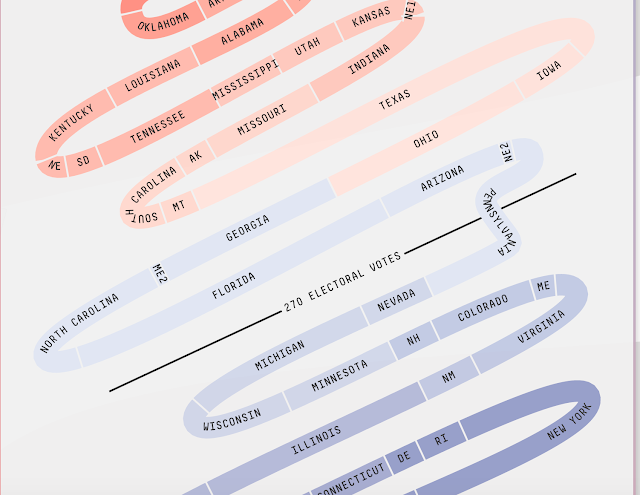 538 predicts that Pennsylvania is most likely to be the marginal state with a forecast vote share of 52.0% for Biden and 47.3% for Trump (a 4.7 percentage point margin of victory).

Three states are leaning in favor of Trump but by very thin margins that insufficiently optimistic turnout models, trend lines, and just random error could easily flip to Biden: Texas (1.5), Iowa (1.5) and Ohio (0.6).

These seven states and two districts before one gets to the marginal state, leaves a lot of hurdles for Trump to overcome to win the electoral college, and as I explained above, I think that Texas, Georgia, North Carolina, Florida and Arizona are probably slightly erring in favor of Trump due to higher turnout than the turnout models in some of the polls have predicted.

The hurdles involved in Trump taking states with less favorable polling than Pennsylvania are quite dim in Nevada (4.1), Michigan (8.0), Wisconsin (8.3), Minnesota (8.9), New Hampshire (10.6), Colorado (11.7), Maine (11.8) and Virginia (12.5), and the polls probably lean inaccurately towards Trump due to turnout models predicting lower voter turnout in Nevada.

States beyond those are pretty much safe without question.

The odds of no one getting 270 electoral votes, sending the election to the House of Representatives is less than 1%.

The odds that the race comes down to less than half of a percent in a decisive state, likely triggering a recount, is about 4%.

Pennsylvania worries me the most, since pre-election turnout there is only 38% of the 2106 vote, but the polling is very consistent in showing a lead for Biden of at least five percentage points, and there are lots of high quality polls to support that. 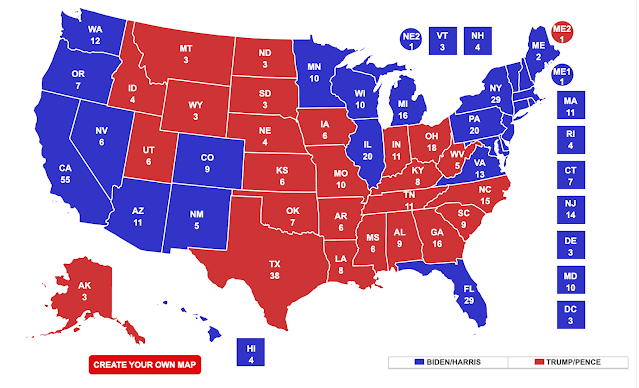 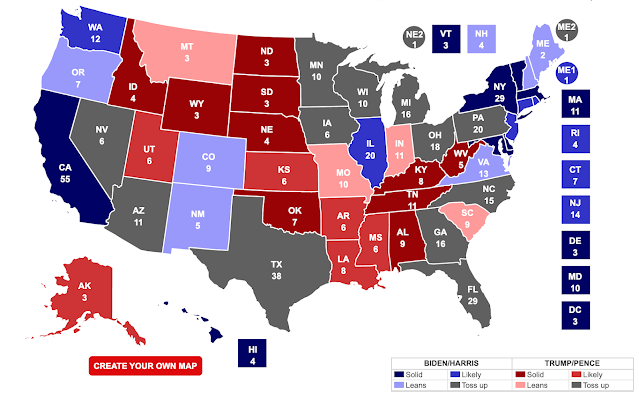 In a tie vote for President with 269 electoral votes for Biden and 269 electoral votes for Trump, the President is selected by U.S. state delegates in the House voting as single states with one vote each. In this calculus, Democrats get 21-23 votes and Republicans get 27-29 votes, so Trump is re-elected.
So, not only is Biden up against an electoral college that is shifted about 3 percentage points of the popular vote against him, but Biden also needs 270 electoral votes to win, while Trump needs only 269 electoral votes to win.
Likewise, a conservative 6-3 majority on the U.S. Supreme Court gives Trump a clear edge over Biden if an outcome dependent decision like the one made in Bush v. Gore in 2000 comes before it. But that unlikely to happen in this election.
Basically, Biden needs a clear win to win, while Trump is favored if there is any gray in the outcome of the election.
CNN's poll of polls gives Biden a 10 percentage point lead in the national polls going into the election, compared to the 3 percentage point polling lead that Clinton had over Trump. The shift from 2016 to 2020 looks to be roughly a 8 percentage point decline in Trump support reasonably uniformly nationwide (compared to the final results where Clinton led by 2 percentage points in national polling, it is a 6-7 percentage points lead compared to the final polls).

What should be quite apparent is the state polls look almost identical to what you’d expect given a uniform shift of 8 points across states. The average difference is just a point. Moreover, there is no bias with Biden doing 8 points better than Clinton did in the average of state polls, as you’d expect with the national polls where they are.

In early voting, more than 20% of voters have been first time voters. Given polling of young voters and older voters in the past, probably more than half of the shift is due simply to older voters who disproportionately support Trump dying and younger voters who disproportionately support Biden entering the pool of voters. A few percent of Americans who voted in 2016 have shifted away from Trump over the last four years, but that percentage is surprisingly small for such a catastrophe of a Presidency.

Control of the U.S. Senate

Real Clear Politics in its "no toss up" analysis predicts a 50-50 split in the U.S. Senate, which is Democratic control if Biden wins the Presidency (although not until January 20, 2021, before then, Vice President Pence casts the tie vote).

This implies Democratic pickups in Arizona, Colorado, Maine and North Carolina, and a Democratic loss in Arkansas. 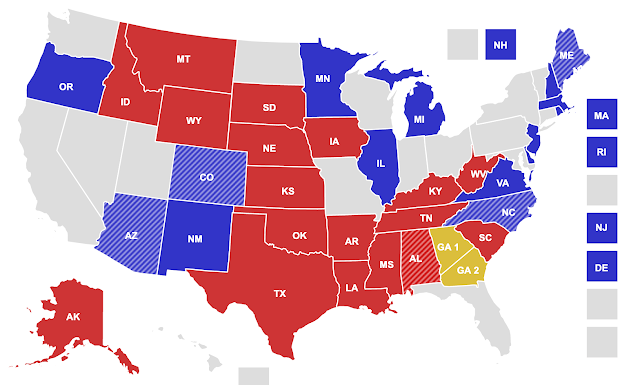 The RCP list shows more states as toss ups, but again, some of the toss ups lean strongly Democratic. 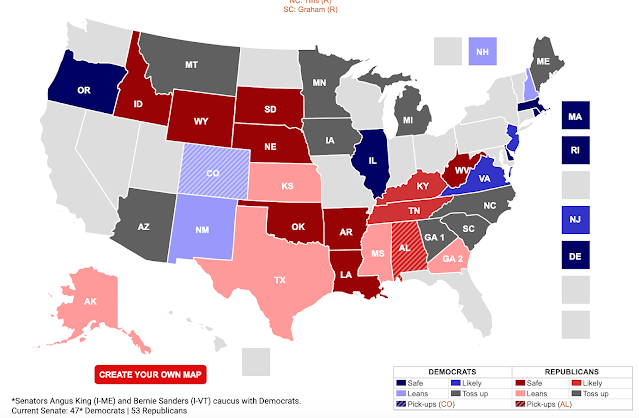 Control of the U.S. House of Representatives

Currently there are 232 Democrats, 197 Republicans, 1 Libertarian and 5 vacancies. 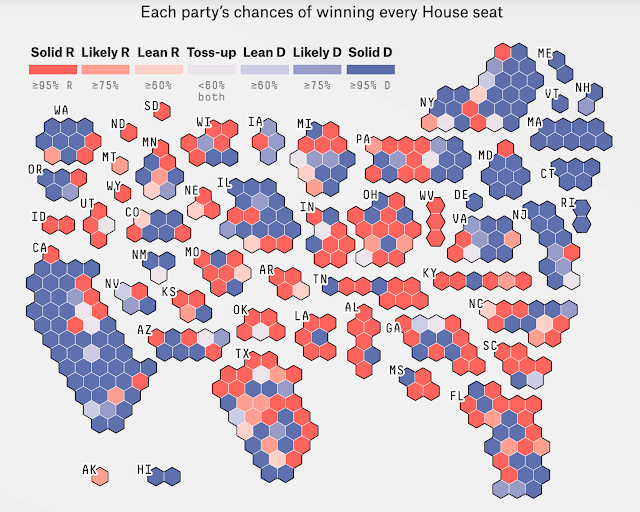 The current mix of House seats was set in the 2018 midterm elections with similarly high turnout for a midterm election and with a similar political climate, so less of a shift is expected in these races. The odds of the Democrats losing 18 seats that they hold and all five 5 vacant seats, and not picking up a single Republican held seat, is low.

Colorado is a safe state for both Biden-Harris and its Democratic U.S. Senate candidate, John Hickenlooper, our former two term Governor and former Mayor of Denver.

The only federal race that is close in Colorado is the Third Congressional District consisting of Western and Southern Colorado, in which several polls have shown Diane Mitsch Bush, the Democrat, leading by 1 percentage point, over primary upset winner, Lauren Boebert, a far right conspiracy theory adherent with a checkered past and no prior political experience.

There are some important ballot issues at the state level in Colorado that have been the subject of only a little polling.

The repeal of the Gallagher Amendment is favored to win, but with large numbers of undecided voters who tend to vote against tax increases.

Issue 115 to ban late term abortion is favored to lose, but only by a thin margin.

Issue 118 to create a government financed paid medical and family leave system paid for with a 0.9% payroll tax (half employer and half employee) is favored to win by a safe margin.

I have seen no polling on the many other measures facing Colorado voters and have only win intuitions myself about how they will come out.

While coverage of no federal elections is scarce, the likelihood is, going into redistricting following the 2020 Census, that Democrats will shift more states to total control and more states from total Republican control to mixed control. This should reduce gerrymandering against Democrats as will the shift of many states towards more neutral redistricting commissions.

Many states are leaning towards legalizing marijuana, in some cases only medical marijuana by ballot measures today, and in some cases recreational use as well. These measures could help tip the balance towards national legalization in a Biden administration.

What it would do: Allow adults 21 years and older to possess, consume or transfer up to one ounce of cannabis and create a regulatory system for the products' cultivation and sale.

What it would do: Allow physicians to recommend medical cannabis for patients with any of 22 qualifying conditions such as cancer, multiple sclerosis and post-traumatic stress disorder.

What it would do: Limit the smoking of medical cannabis to people who are terminally ill, and would leave the future regulatory framework up to the legislature.

What it would do: Amend the state's constitution to establish 21 as the legal age to purchase, possess and consume cannabis.

What it would do: Allow adults in the state to possess, buy and use cannabis for recreational use and defined a 20% tax on recreational cannabis. It would also allow people serving a sentence for certain cannabis-related acts to apply for resentencing or records expungement.

What it would do: Amend the state constitution to legalize cannabis for personal, non-medical use by adults 21 and older.

What it would do: Establish a medical cannabis program and registration system for people with qualifying conditions.

South Dakota Amendment A
What it would do: Legalize cannabis for all adults and require state legislators to adopt medical cannabis and hemp laws.

Puerto Rico has a clean up or down vote on statehood today that is likely to pass. If it passes, it could speed up its admission as a U.S. state if Biden wins and Democrats win control of the U.S. Senate.

Mississippi voters will vote on a new flag that is not longer based on the Confederate Battle Flag. It's old flag has been retired but the new one has not yet been adopted (the new one still has the "In God We Trust" dig).

There is an anti-abortion measure in Louisiana (that would end all state level protections for abortion rights limiting those protections to the U.S. Constitutional minimum), a measure about the employment status of gig workers like Uber drivers in California, measures to adopt ranked choice voting in Alaska and Massachusetts, a measure to drop "and Providence Plantations" from Rhode Island's official name, a measure to prohibit local government concealed carry gun control laws in Montana, a measure to restore affirmative action in California (banned in 1996), a measure to allow 17 year olds to vote in California, a measure to end cash bail (under a 2018 law), and in Mississippi:

Mississippi's Ballot Measure 2 asks voters whether to remove a Jim Crow era voting provision that requires a candidate to secure a majority in the state's popular vote and to win a majority of Mississippi's 122 state house districts.