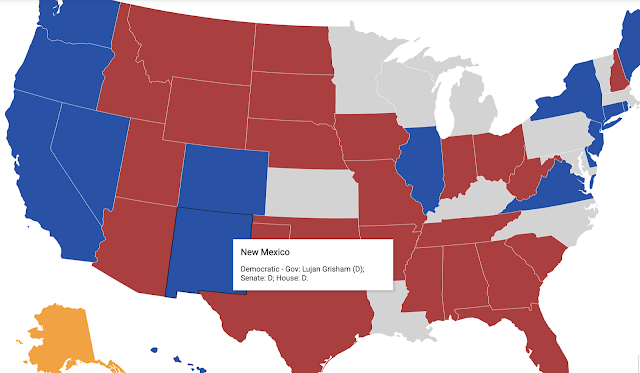 States with complete Republican or Democratic legislative control (trifectas)
The U.S. Constitution gives states the ability to determine by law how their electoral votes will be allocated. Does this mean that there is a realistic prospect that Trump will be able to convince state legislators to overturn the outcome of the November 3, 2020 general election in states won by Biden to give Trump those electoral votes instead?
Not really. Why?
1. While legislators can determine a method before an election is held, once the election is over the law on the books controls. A law to change a state's allocation of electoral votes from being based on the results of the November 3, 2020 election to a legislative choice would be an unconstitutional ex post facto law.
2. This legislation would also be contrary to the constitutional provisions that provide that the President must be chosen in some kind of election.
3.  The electoral college votes on December 14, 2020, in less than five weeks. No state legislator anywhere has introduced a bill to take this kind of step anywhere in the country yet. The logistics of building up enough support to get a bill like this passed would be challenging. Many state legislatures aren't even in session right now, so a special session would have to be called and it would have to move fast.
4.   State GOP governors and legislators know that it would be permanent political suicide to overturn the election results from their own state's voters in an attempt to thwart their choice for President. GOP support for Trump's challenges to the election outcome are a mile wide and an inch deep. They are humoring Trump but they know it is a done deal.
5.    The only states where it is politically possible to pass legislation like this, even assuming that conservative judges let partisan bias cloud their judgment and approved the constitutionality of a measure like this, are state where Republicans control both houses of the legislature and the Governorship, so that they could pass the law without Democratic opposition, but Trump won the state's electoral votes.
There are only three states that fit that description: New Hampshire, Georgia and Arizona.
The trouble for Trump is that even if all three of those states were flipped to Trump, contrary to the election outcome on November 3, 2020 in those states, Biden would still have 275 electoral votes and would win.
Republican state legislators and Governors aren't going to commit political suicide in furtherance of a pro-Trump tactic that isn't going to succeed even if they do it. And this attempt is obviously futile if you think about it for even ten minutes and do some minimal research.
So, this last ditch tactic isn't going to work even if Republican state legislators and governors, and the judges in courts asked to review the constitutionality of the legislation were shameless enough to try.
Posted 6:58 PM
Email ThisBlogThis!Share to TwitterShare to FacebookShare to Pinterest
Tags: 2020 election, Political Tactics

Not going to happen in New Hampshire.
The legislators are very close to the people there.

They have 400 members of the lower house in New Hampshire which has 1.36 million people, which is 3,400 people per state representative district, and the number of voters in each district is, of course, much smaller. But I certainly don't have my finger on the pulse of New Hampshire's legislature. The logistics of assembling 400 lower house and 24 upper house legislators in a few weeks would also be an issue.