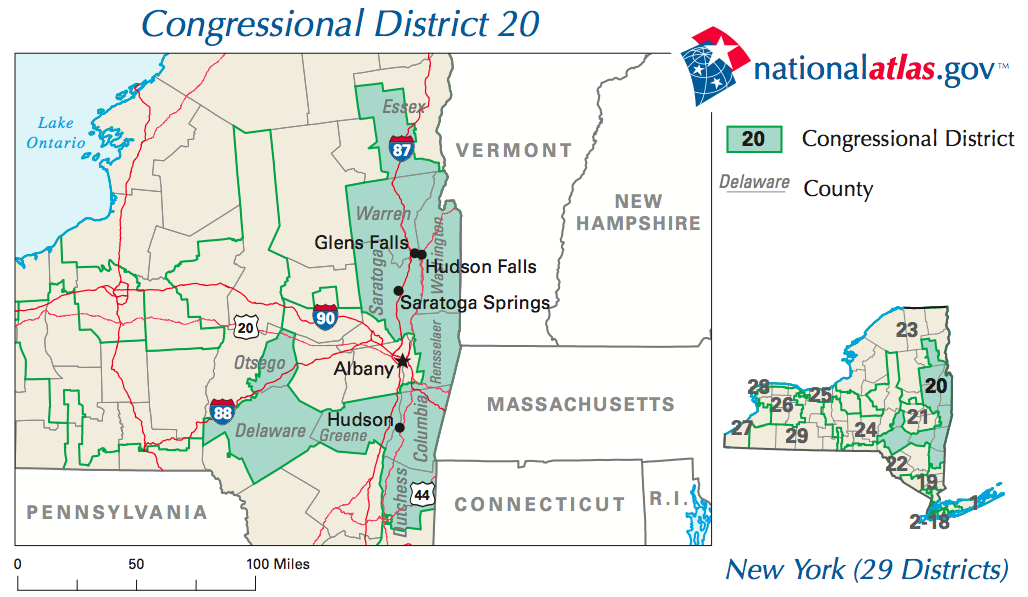 One of the ways that the Democratic party has decimated Republicans in New England and the Mid-Atlantic, is with candidates like Kirsten Gillibrand, a libertarian leaning Democrat who represents an conservative upstate New York Congressional District more or less along the Hudson River.

She is a member of the Blue Dog Coalition, a group of congressional Democrats who hold more conservative views than their liberal Democratic counterparts.

She is an outspoken advocate for gun rights, and she supports an extension of the Bush tax cuts. She has been endorsed by the National Rifle Association.

She also has a 100 percent rating from the American Civil Liberties Union. . . .

Gillibrand was elected to the House of Representatives in 2006, unseating Republican John Sweeney. In the 1990s, she worked as a lawyer for the Department of Housing and Urban Development during Cuomo's tenure as housing secretary in the Clinton administration.

She was one of dozens of Democrats who joined House Republicans in voting against the Bush administration's $700 billion bailout of the financial industry in October, arguing the plan lacked proper oversight.

Libertarian leaning politicians provide the free market economic leanings, a distaste for deficit spending, and acceptance of private gun ownership that have been important parts of the Republican political playbook. Yet, they reject the heavy handed legally imposed morality, disregard for civil liberties and rejection of science that motivate conservatives in the South, but alienate even wealthy conservatives in the Northeast and West.

While the Libertarian party in the United States is something of a joke, libertarian leaning voters are a crucial group of swing voters that Democrats and Republicans seek to woo. And, the Democrats have been winning that contest for the last several elections.

Also, if the Democrats continue to dominate the libertarian corner of the political compass, in addition to the more traditional liberal corner, Democrats will also write the future of the Republican party's effort to reach out beyond its traditional conservative corner. The only place for Republicans to expand will be will populist leaning voters and candidates, "big government Republicans" they are sometimes called, like Mike Huckabee.
Posted 9:31 AM
Email ThisBlogThis!Share to TwitterShare to FacebookShare to Pinterest
Tags: Congress, Political Identity, Republicans

From the link, I think.

Oops. Yeah. I must have misformated the link or something.