Firefighters on Friday will continue to battle the Black Forest fire north of Colorado Springs that has consumed 15,700 acres and 379 homes since it started Tuesday.  Some 38,000 people are impacted in the mandatory evacuation zone that covers 24 square miles, stretching from Elbert County to the northern part of Colorado Springs. . . . The number of homes destroyed makes the fire the most destructive in Colorado history. The Waldo Canyon fire in 2012 destroyed 347 homes.

Maketa said at a news conference late Thursday afternoon that firefighters found the bodies of two people in the rubble of the Black Forest fire. The bodies were discovered in what was the garage of a home that the blaze leveled. They were next to a car with its doors open. The car's trunk was packed full of belongings.

From the Denver Post.  A statement in an earlier blog post on the fire based on a breaking news Denver Post story that the Black Forest fire was 48 square miles was incorrect.  The 15,700 acre burn area is 24 square miles and the mandatory evacuation zone size in the quoted language above is probably underestimate since it includes some areas that have not yet been burned.   The fire is currently only 5% contained so the damage is likely to be greater when it ends.  A back of napkin estimate of the damage done by the Black Forest fire is a hundred million dollars or more. 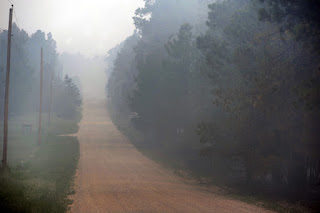 (This photo is one of 165 at the Denver Post from the collection linked above and is posted as a claimed fair use for the purpose of discussing the political issues associated with the used of government funds to protect private property in high risk areas sometimes called "stupid zones.")

True to its name, the exurban Black Forest subdivision is ensconced in a scrubby, arid west, pine forest - as the late Colorado op-ed columnist Ed Quillen liked to call it, a "stupid zone."  He had argued for a consistent libertarian approach towards developments in these areas, i.e. that they be permitted, but that government resources not be used to protect property in these zones (as opposed to human life) from the natural dangers that people building there assumed, or to subsidize development in these areas.  In particular, it may not make sense to use disaster relief funds to rebuild structures in disaster prone areas.

Authorities say the Black Forest fire was probably started by a person (not necessarily intentionally) and is now being investigated as a homicide.

Royal Gorge Bridge and Park in Fremont County is operated by the Royal Gorge Company of Colorado which employs 40 permanent staff and many more part-time seasons  workers.  It is a a standout Colorado attraction of the Route 66 era, including a bridge over one of the deepest bridge spanned canyons in the nation, that I've been to with my kids.  The 3,100 acre Royal Gorge fire this week has devastated this relic of 1950s tourism. Their cable cars have (literally) gone up in smoke and the cable has fallen into the canyon.


[Cañon City] Mayor Tony Greer toured the Royal Gorge Bridge and Park and even drove across the bridge Thursday.

"As devastating as some of the damage appears, it seems to have created a wonderful opportunity for us, as well," he said. "This national treasure that we've been charged with — the bridge itself — is intact and it's safe."

Of the more than 1,000 planks on the bridge, only 32 were burned on the south end of it. But of the 52 structures on the property, only four remain.

The attraction will be virtually starting over from scratch and have to re-imagine itself.  Presumably, the remainder of this year's season will be a lost cause for the attraction.  The city had been considering a redevelopment of the attraction anyway, however, and the many millions of dollars of damage are mostly insured, although the jobs lost won't easily be replaced in the short-term.
Posted 11:30 AM
Email ThisBlogThis!Share to TwitterShare to FacebookShare to Pinterest
Tags: Colorado, Local Color, Public Safety, State Budget, Zoning