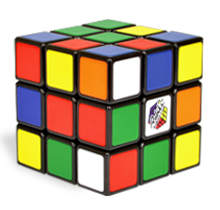 My colleague at work likes to use the Rubik's Cube as a metaphor for the difficulty of solving hihgly interrelated problems.  I'm personally fascinated by a quite different element of the 1980s fad toy.

A Rubik's Cube is virtually impossible to solve at all, let alone solve in a reasonable time, without instruction from a book, video or teacher.  Maybe one in a million people are capable of solving it, and the people who did so the first time were mostly graduate students in mathematics who spent weeks or months figuring out how to do it the first time.

Yet, with instruction, almost anyone with average or above average spatial ability and intelligence can solve it (I'd guess that at least 25% to 35% of the population, and quite possibly twice that percentage, are capable of learning to solve it).

Indeed, not only can someone solve it with instruction, but just about anyone who can learn to solve it can do so in a matter of a few minutes or less.  I learned how to do it when I was tween in small town Ohio with a little time on my hands and an illustrated pamphlet about 40 to 60 pages long.  It took a week or two to learn, and a month or so to get to the point where I was able to do it quickly enough to solve it in competitions where I had a fighting chance of at least placing against others who had mastered it.  I was never that great at it, but with less than 100 hours of instruction, my personal record for the amount of time it took me to solve it was within 30 seconds or so of the world record at the time.

Another important aspect of the skill of learning to solve a Rubik's Cube is that one of the keys to doing it is to learn a specialized, highly logical language with a dozen or so symbols with which particular manipulations of a Rubik's Cube are described.  Then, the solution consists of learning a dozen or so "sentences" that can be put together using that language and learning when to use each "sentence."

For what it is worth, it is a skill that requires regular practice.  I couldn't solve one if you handed it to me today, several decades after my Rubik's Cube solving hey day, but I could probably relearn the task now in a few hours on a long weekend.

One is riding a bike.  Another is doing an inward dive from a diving board or platform.  Two far less specific tasks which have a linguistic or quasi-linguistic element to them are reading music well enough to sight read, and learning to make realistic free hand drawings.

Maybe 25% of people who play an instrument in high school, and maybe 10% of people who sing in organized choirs, can sight read music, even though again, the number of symbols involved is modest and almost everyone who is regularly involved in playing music know what the symbols mean in principle.  But, it is certainly a skill that can be taught and doesn't take many thousands of hours to master.  Many musicians who haven't already mastered the skill learn to do it in college in a single course for a semester or two.

The vast majority of people are not functionally literate in the written language of music, even though a very large percentage of people are quite capable of singing music that they are learned by ear, even though most people know what all of the common symbols used in musical notation mean in principle.

The counterintuitive thing about realistic free hand drawing, which can be learned in a year or two or less depending on how intensively you work at it and the quality of your instruction, is that it has very little to do with manual dexterity.  If you can type, print clearly, and trace an image using tracing paper, you have sufficient manual dexterity to do realistic free hand drawing.  The skill is almost entirely mental and basically involves nothing more than drawing what you actually see, rather than what you conceptually think that you are seeing after processing the image.  If you can shortcut the image analysis circuits in your brain, you can do realistic free hand drawing with only modest additional instruction in techniques like shading and attention to lighting.

The vast majority of people are not functionally literate, or even barely literate in expressing themselves in writing though realistic drawings.

Literacy is a good frame for thinking about this because it captures the power of the idea.  Once you have a vocabulary for describing something, you can think about it in much more efficient and powerful ways.  One of the biggest examples of this comes from deaf people who were not taught sign language as children.  They simply cannot do things like think about what other people are thinking until they learn a sign language that has words for these concepts.  Then, suddenly, those ideas blossom and their minds are opened to whole new categories of understanding and experience.

I think that expanding literacy and vocabulary into other areas could produce similar revelatory discoveries for average people.

Almost everyone, easily more than 98% of the population, is very, very good at recognizing faces and interpreting facial expressions.  For example, almost everyone who isn't physically blind, or neurologically face blind can pick their own face and the faces of their friends out of group portrait or a crowd of people waiting to greet people leaving an airport in a matter of moments.  Even with a fairly brief chance to see someone's face clearly, the average person, even if they can't remember that person's name, could pick them out of a lineup of pictures.

We've learned from forensic cases that people are less accurate in identifying strangers and people of different races than they are at identifying casual acquaintances and in general people of the same race.  But, we're still very good at it and many humans are better than any computer system in existence at this task.

What we are not at all good at is communicating faces accurately to others in an efficient manner.  As noted above, the ability to communicate a face in writing by drawing it is uncommon.

Most people can say some rudimentary things about a face that they have seen, many of which are in the form of conclusions reached after analyzing the face rather than in the form of a description of the face that they have seen itself.  They can say that face looked happy or pleased or disgusted or sad. They can identify the race and gender and approximate age of most faces. They might be able to distinguish between someone who is fat or thin, chiseled or baby faced.

But, very few people can actually affirmatively describe a person's face with sufficient specificity, for example, to pick it out of a picture of a bunch of kids of the same race, gender, and age in a group portrait of the kids of a school sport's team or club.

There are people who work for police departments who specialize in helping people to communicate a face that they recognize in their mind's eye by sketching according to the observer's description and adjusting the sketch until they get it approximately right over a period of hours.

But, virtually no one, with the possible exception of experienced police sketch artists, physical anthropologists and medical doctors who work with faces regularly, can verbally communicate a face in even a few sentences in a way that someone else can understand well enough to identify that person in a crowd of demographically similar people without seeing a sketch drawn from those instructions.

My intuition is that the fact that people are so inarticulate is low hanging fruit that is a Rubik's Cube problem that could be solved by developing a logical language with which to describe faces precisely that could be taught as easily as sight reading music, free hand drawing, mathematical notation, the International Phonetic Alphabet, or a variety of similar tasks, in tens or hundreds of thousand, rather than thousands or tens of thousands of hours.

This is a mind hack waiting to be invented that would have wide utility, but which no one has really articulated and put their mind to, and it really is a "hack".  The key to developing a vocabulary that would communicate information from the facial recognition centers of our brain to others efficiently is to gain a good understanding of how the facial recognition centers of our brain actually "code" and process that information so that the vocabulary of facial identification would track that approach as closely as feasible.

On one hand, this seems doable.  You don't need a general vocabulary for describing all visual input accurately, just one sufficient to describe one highly specialized kind of visual input.  And, almost all of us already have the intuitive, if inarticulate, ability to understand and process this kind of input accurately and quickly.

But, it is a worthwhile task to take on, and one that a small interdisciplinary team of investigators, with a modest budget, and some good insights could probably tackle the challenge of creating a good working vocabulary with which to describe faces precisely in a couple of decades.  And, if they were successful, the practical payoffs could be huge.  This is a project that is worth throwing a few tens of millions of dollars at to see what can be accomplished.

In time, learning the vocabulary of facial recognition, learning to sight read music, learning to make realistic free hand drawings, could all become nearly universal aspects of a basic education for someone who is considered a functional literate normal adult, just as learning to ride a bike, to speak and write and read in one's native language, and driving a car are today.
Posted 11:18 AM
Email ThisBlogThis!Share to TwitterShare to FacebookShare to Pinterest
Tags: Education, IQ, language, neurodiversity, Neuroscience, Personal Conjecture, personal reflections, pet ideas, sports