The AUSA 2016 trade show for Army defense contractors has previewed some relatively mature future technologies for the United States Army. Several of the most interesting of them are discussed below. 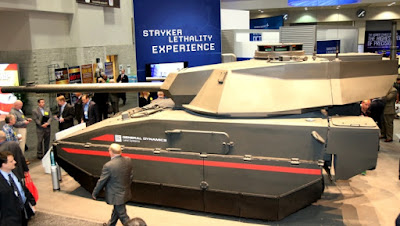 The United States Army has several thousand 70 ton M1 Abrams main battle tanks in its arsenal. But, in recent conflicts in places like Kosovo, Afghanistan and Iraq, they have not been in heavy demand.

One problem is that it can take weeks to get them to the conflict via sea lift, make very intense use of scarce long range airlift resources (the C-5 and C-17), and can't be deployed on the numerous but smaller capacity (about 20 tons) C-130. It is so heavy that in many parts of the world, it can't even be transported by rail or cross rivers on existing bridges, because existing rail and road bridges aren't strong enough to hold the weight of the behemoths one after the other.

Another problem is that many mountain passes and urban roads are too small to fit the M1 Abrams, denying them access to key conflict areas.

A third problem is that M1 Abrams tanks are diesel hogs requiring lots of fuel to be transported along long, vulnerable supply lines near war zones.

Each of these problems could be addressed with a lighter version, at the sacrifice of secondary armaments and some degree of armor protection. But, the armor would still be better than in the Stryker armored personnel carriers and armored Humvees in wide use by the Army during the Iraq War.

Apart from IED protection, there has not been a huge need for heavy armor in the conflicts that the Army has participated in recently. Military systems against which heavy as opposed to medium grade armor makes a difference haven't been widely used by the Army's adversaries and are often vulnerable to air strikes and precision guided artillery strikes that can remove the threats before tanks arrive. In conflicts with near peer adversaries like Russia and China, the risk of a conflict escalating into a nuclear war discourages large scale conventional tank warfare in any case.

A light tank would not, however, address some problems which have also been identified with the M1 Abrams in Iraq and Afghanistan.

While heavy tanks provide more protection against IEDs which have been the signature threats in Iraq and Afghanistan than lighter vehicles, their relatively flat bottoms are still not optimal against these threats which MRAPs are designed to minimize. This would remain an issue.

While off road capabilities are desirable, tracks are slower and less fuel efficient than wheels and in the experience of U.S. forces, the vast majority of driving takes place on roads anyway and much of the off road driving is also capable of being handled by wheeled vehicles.

Particularly in Iraq, it has also become clear that main battle tanks in urban areas need to be supported by secondary gunners who are shielded from snipers and from enemy soldiers who approach on foot out of sight lines to deliver anti-tank ordinance at point blank range in the most vulnerable accessible places.  So, tanks need to be deployed with infantry who can escort the tanks so as to screen them from these kinds of attacks. This support requirement would be unchanged.

The Proposed Solution With Off The Shelf Technology


One future light tank, called the Griffin, prepared on the dime of General Dynamics and its partners, starts with the gun turret of an M1 Abrams tank, which in the original version accounts for 22 of the tank's 70 tons, finds a way to trim 14 tons from the turret and 28 more tons from the chassis, to come up with a 27 ton tank with some limited room to cut a few more tons in a more refined design as opposed to a rough and ready technology demonstrator.

Very little training would be required for soldiers already familiar with operating the M1 Abrams as all of the gunnery interfaces are identical, as are many of the maintenance functions and spare parts.

No figures on fuel efficiency for this light tank have been released but it would also certain use less fuel than an M1 Abrams (which can travel just 0.6 miles per gallon of diesel).

The new design's main gun purportedly has the same offensive capabilities as the existing main battle tank, although presumably the light version is not as heavily armored. It would still be too heavy to transport by a C-130 shorter range cargo plane, the work horse of the military airlift fleet.  But, the new system would be lighter than an M2 Bradley infantry fighting vehicle (it is about 35 tons allowing two M2's rather than one M1A to be transported by a C-17), and is just barely light enough to allow three two (the company only claims to be able to ship two on a load) to be shipped in each trip of the U.S. military's C-17 medium sized long distance transport plane (which has a roughly 85 ton capacity).

The design sticks to the old paradigm of using cheap dumb tank rounds rather than expensive smart missiles which might make it possible to drop the weight of the system with the same explosive potency while significantly while increasing offensive range and accuracy - which might allow for a C-130 transportable system. But, the small learning curve for existing personnel and prospect of a system that could be up and running in a couple of years rather than a decade or more, makes it quite attractive as a procurement option for Pentagon planners.

The Army's "Mobile Protected Firepower" initiative is open to the idea of a lighter tank weighing up to 35 tons, which would still allow two to be transported on a C-17, using existing technology and probably either a 105mm or 120mm main barrel (the contract requirement is at least 50mm but without creating a new kind of ammunition to manage).  The Army would prefer it if the system could be air dropped but recognizes that this may be an unrealistic expectation. 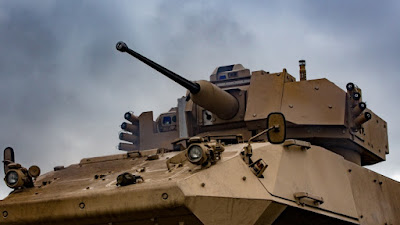 The C-130 transportable Styrker is a wheeled armored personnel carrier that is the core military vehicle in many of the Army's medium weight brigades, which provide quick deployability with moderate weight armor and armaments, rather than sending in relatively unprotected infantry that is well suited to counterinsurgency campaigns. It comes in several variants including one with a "mobile gun system" that mounts a tank-like main gun on the vehicle to allow it to deliver powerful explosive rounds.

Raytheon and a defense contractor called CMI have come together to design a new modular turret for the Stryker. In addition to sensors called the "command independent viewer" or CVI:

The roughly five-ton turret can be manned or unmanned and is capable of accepting any number of guns, including a 30mm or 105mm cannon or a missile launcher, according to Bo Arne Berglund, chief marketing officer for CMI. “The only thing you need to change is the cannon and possibly the auto-loaders and ammunition systems,” he said.

The Army will start testing the 30mm gun version in 2017. See also here.

The system is a rival to the General Dynamics Corporation's Protector medium-caliber remote weapons station (MCRWS) which already has an Army contract to upgrade part of the existing Stryker fleet.

Both systems reflect a desire to give the Stryker fleet more offensive power in future conflicts.

A Next Generation MV-22 Osprey 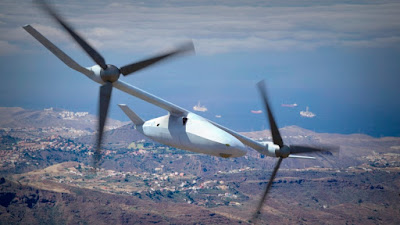 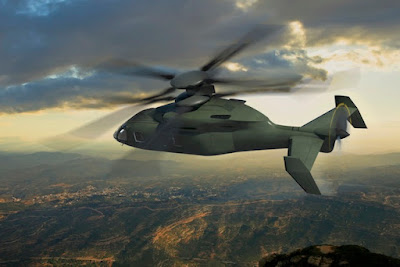 An Artist's Rendition of the Sikorsky SB-1 Defiant

The Marines have the MV-22 Osprey, a tilt rotor vertical takeoff and landing plane. After numerous technical problems in its original incarnation, it is now a proven technology that allows for greater speed, range and fuel efficiency than a helicopter, with the vertical take off capabilities of a helicopter that make it deployable from ships smaller than a full sized aircraft carrier.

Textron's Bell Helicopter unit is highlighting technology demonstrators of two proposed successors to the MV-22 and hoping to convince the Army to replace some of its conventional helicopter fleet with them.


The V-280 Valor is a tilt rotor utility aircraft which is one of four contestants designed to replace the UH-60 Blackhawk and CH-47 Chinook helicopters entering service by 2035 as part of the Army's "Joint Multi-Role Technology Demonstrator" competition. It would carry 14 troops and a gunship version that would carry Hellfire missiles and other armaments is in the works.

The main competition for the V-280 is the "Sikorsky SB-1 Defiant" a more conventional helicopter with a pusher-prop for added speed" which will have its first test flight next year.

Bell Helicopter's sister aircraft to the V-280 is its newly announced V-247 Vigilant an armed tilt rotor drone. This 14.5 ton aircraft would be 37 feet long and have a 65- foot wingspan ("about the size of the Air Force‘s medium-altitude drone MQ-9 Reaper."), and is a Marine request.  Like the MV-22, the V-280 and helicopters, it could deploy from ships at sea that are not full sized aircraft carriers. It would cruise at the same speed as the MV-22 (250 knots) allowing it to escort the lightly armed Osprey on missiles in hostile territory. It could also replace some AH-64 Apache gunships in the Army's current helicopter fleet.

The V-247 for the Marines also plays to service rivalries. The Navy also has a ship based armed drone in the pipeline, called the MQ-25A, but that drone can only be launched from aircraft carriers and is comparable to a jet fighter in capabilities, which are far in excess of those of the V-247 in most circumstances.

Both aircraft involve significant modifications from the MV-22's tilt-rotor system and a novel method of reducing the size of the wings/rotors in a hanger, for example, on a ship.

Meanwhile, the Army is also reallocating its helicopter fleet between the active duty force and the Army National Guard, shifting Apache gunships to the active service, while moving utility helicopters to the National Guard, while phasing out entirely the OH-58 Kiowa scout helicopter originally designed for reconnaissance and then as an improvised light attack helicopter, all of which are tasks that other Army assets now do better. 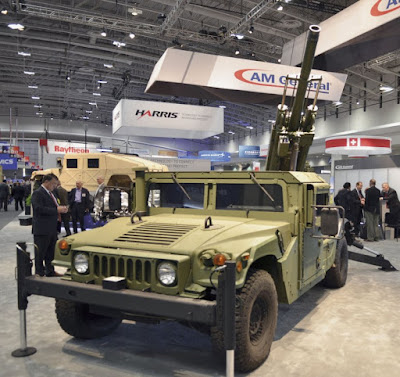 AM General featured a Humvee with a 105mm howitzer, that would usually be towed, instead integrated into the vehicle itself.