Winning The Battle But Losing The War? 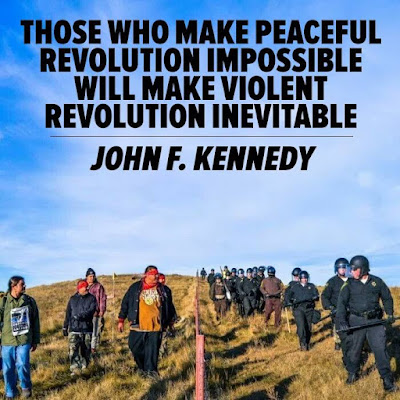 The backers of a pipeline across the Dakotas have truly screwed the pooch with the intense law enforcement response to protests in the face of some doubtful efforts by supporters to push the project through over opposition.

At this point, even if they are successful, they are going to have a pipeline that can't move and can't possibly be guarded over all of its thousands of miles expanse, that large numbers of people will feel justified in sabotaging for decades to come. As a practical matter, the project will become an uninsurable albatross that will be out of service due to intentional efforts to destroy it more often than it is up and running.

I'm not endorsing that course of action, but it increasingly seems inevitable and makes the efforts of backers of the pipeline appear to be nothing but folly.
Posted 10:51 PM
Email ThisBlogThis!Share to TwitterShare to FacebookShare to Pinterest
Tags: Energy, Native Americans, Political Tactics, private law, Public Law