This is true, but not because working class whites have suddenly started trending Republican. That transition took place in the 2000 election between Bush and Gore and has stayed that way ever since then (arguably based upon the particular candidates Democrats have advanced to represent them; Bill Clinton knew how to appeal to working class white voters in a way that subsequent candidates have not). 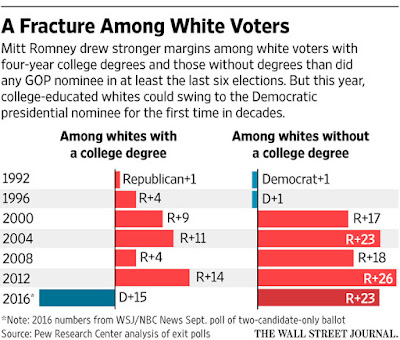 It is entirely plausible that this stunning turnabout will be a one time blip, rather than a sustained trend, particularly because this shift is disproportionately among white women with college degrees in a race between an unapologetically misogynist serial rapist Republican nominee against the first woman to be a major party nominee for President in U.S. history. White female college educated voters are unlikely ever again to face such clear gender driven signals in a Presidential race.

Republican voters as a whole are still more affluent than Democratic voters, and Trump voters are as affluent or more so than his GOP competitors in the primary election were. But, what has really distinguished Trump supporters from voters who have abandoned ship to support Clinton, tell pollsters that they are undecided, or support a third party candidate, is racial resentment. This is so pervasive among non-college educated white voters that it has swamped gender effects; while it is far less common among college educated white voters. As Dylan Matthews explains at this link:

[S]upport for Trump in the primaries strongly correlated with respondents' racial resentment, as measured by survey data. Similarly, Republican voters with the lowest opinions of Muslims were the most likely to vote for Trump, and voters who strongly support mass deportation of undocumented immigrants were likelier to support him in the primaries too. . . .

Even in the general election, while support for Trump is correlated most strongly with party ID, the second biggest factor, per the analysis of Hamilton College political scientist Philip Klinkner, was racial resentment. Economic pessimism and income level were statistically insignificant.

The message this research sends is very, very clear. There is a segment of the Republican Party that is opposed to racial equality. It has increased in numbers in reaction to the election of a black president. The result was that an anti–racial equality candidate won the Republican nomination.

This year's electorate is split by race and social class, not be income per se.

Education has always been as much of a means by which to socialize students into the norms of a society or social class, as it has been to provide practical skills or increased intelligence (particularly in the liberal arts and many business majors). And, in this case, higher education has successfully, over two generations, socialized the college educated population of the United States into anti-racist norms. It has also taught students to reject conspiracy theories and accept credible information from the mass media to usually have at least some grain of truth to it.

But, this process did not socialize affluent individual who achieved their economic success without a college education. Among these individuals anti-racist norms run only skin deep when they are present at all.

Also, religious distrust of science has driven many who want to adhere to their religion's doctrines to adopt a conspiratorial assumption that science, higher education and the media are controlled in a way that subverts religious truth. In that context, other ridiculous lies and conspiracy theories easily piggy back on a pre-existing structure that neutralizes reality based checks on alleged religious truths. Despite the fact that Trump is not the human being that many Evangelical Christians would like, the fact that he shares their conspiratorial worldview makes him more credible in their eyes than a candidate like Hillary Clinton who embraces truths about the world (which the college educated call "reality") and a worldview in which it inevitably follows that many of their literalist religious beliefs are false. That is a bitter pill indeed for many of these believers to swallow.

Thus, in a very real sense, the answer to Trump's success is in Genesis.