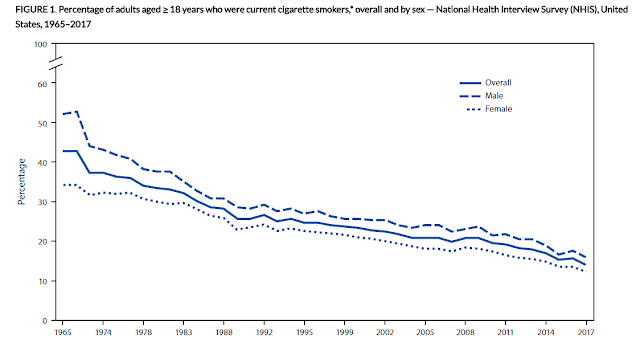 The U.S. isn't known for its excellence in public health, but one front where it is a world leader is its decades long effort to reduce smoking rates.


Cigarette use among American adults is at the lowest it's been since the Centers for Disease Control and Prevention started collecting data on the issue in 1965, according to a report released Thursday.

"The good news is that cigarette smoking has reached unprecedented lows, which is a tremendous public health win, down to 14 percent from over 40 percent in the mid-1960s," said Brian King, senior author of the report and deputy director for research translation at the CDC's Office on Smoking and Health. About 47.4 million Americans, or 19.3%, used any tobacco product in 2017, the report says. .  . .

the data is from the National Health Interview Survey, "an annual, nationally representative, in-person survey of the noninstitutionalized U.S. civilian population." The 2017 sample included 26,742 adults and had a response rate of 53%. . . .