Drug cartels (to a significant extent meet U.S. based, rather the domestic demand) armed with guns smuggled in from the United States are usually considered the leading cause of the high homicide rate in Latin America, although, as the Economist notes in the case of Columbia, it is more complicated than that.

Mexico's murder rate is near a peak of about four times the U.S. rate, although it is still much lower than many other countries in Central and South America. In Mexico, the homicide rate appears to be due to warfare between drug cartels caused by the decapitation strategy of its anti-drug law enforcement effort that has splintered and destabilized existing drug cartels without putting much of a dent in the volume of the drug trade itself. 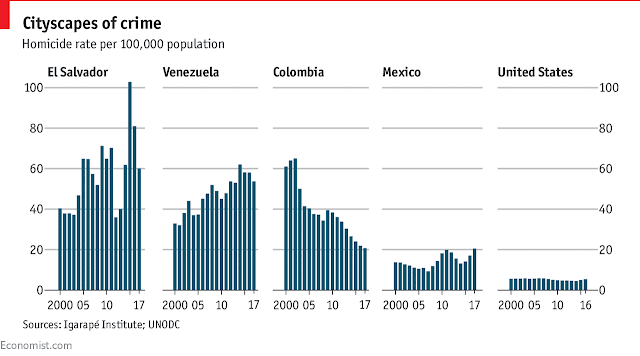 Latin America boasts just 8% of the world’s population, but it accounts for 38% of its murders. The number of criminal killings in the region came to around 140,000 people last year. . . .

In many Colombian cities murder used to be the leading cause of death. The rate in Cali in 1994 was 124 per 100,000, four times worse than New York at its most lethal. The mayor was a surgeon who realised that murder was like a disease. Following an approach pioneered in New York and copied across the rich world, he set up “violence observatories” to study precisely how people, places and behaviour led to killings. They found that, even amid a raging drugs war, most murders resulted from drunken brawls. Restrictions on alcohol and guns helped cut murders by 35%. . . Medellín . . . targeted drug cartels. . . . In 2017 Colombia’s murder rate was 24 per 100,000, the lowest for 42 years.

The power vacuums caused by demobilization of the FARC and a weak government are also blamed for the still high murder rates in Columbia.

More here. Basically, cartel and kingpin organizations have been replaced by more of a domesticated mafia. Homicide is also a big problem in Brazil:


In Brazil to the south (NYT):

In Rio de Janeiro state alone, more than 5,197 people have been killed this year — far more than the 3,438 civilians killed in conflict last year in Afghanistan, according to United Nations figures.

One-quarter of those may have been killed by the state, a sign of state weakness not strength.