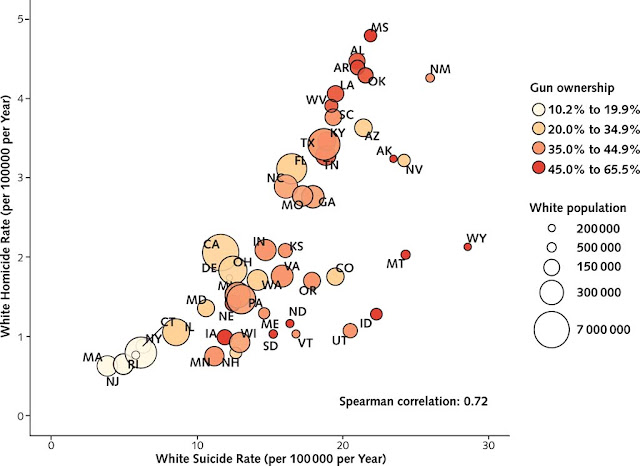 Chart from this April 4, 2018 article in the Annals of Internal Medicine,
for non-Hispanic white men only, combining data from 2008-2016.
(Washington D.C. and Hawaii omitted due to small sample sizes.)

The CDC statistics cover 2011 through 2015, the most recent five years for which data are available, and encompass 2,962 counties and 99% of the U.S. population.

According to the data, rates of homicides, gun killings and illicit-drug fatalities [ed. combined] are highest in counties where nine in 10 residents are white and where President Trump won in the 2016 election.

Such counties are not limited to one geographical region. They include Boone County, W.V.; Washington County, Utah; Baxter County, Ark.; and Brown County, Ohio.

Correspondingly, the white Americans who are safest from such deaths are those who live in racially diverse areas such as Los Angeles, New York and Chicago, where two-thirds of residents are nonwhite, where millions of immigrants live, and where voters favored Hillary Clinton in 2016. Nonwhites also are safer in these areas overall, though rates vary by location.

White Americans are nearly eight times more likely to die from illicit-drug overdoses than murder, the CDC statistics show, a proportion that undoubtedly reflects the heroin and opiate epidemic. But according to FBI data for 2015, when whites are murdered anywhere in the country, the murderer is five times more likely to be white than nonwhite. (This ratio counts only murder cases in which information about the offender is known by law enforcement.)

Whites are so much safer where there are fewer whites and Republicans, in fact, that it raises the question of what exactly underlies this strong correlation between white safety and voting patterns.

There is some gamesmanship here.

"Gun killings" which are not murders is a euphemism for suicides and accidental deaths from guns. And, when you combined overdose deaths, which are eight times as common as murders for white Americans, with "gun killings", murders make up less than 10% of the total. Moreover, a significant subset of overdose deaths and accidental deaths from guns, are probably misclassified suicides or not quite suicides caused by knowing recklessness because someone doesn't care much if they live or die.

So, this index is more of an index of despair than it is an index of fear. Usually, self-administered drug overdoses and suicide aren't things that people are afraid of. Accidental deaths from firearms are something to fear, but not something to fear "someone" for. And, accidental deaths from firearms are a pretty small part of the total number, especially for adults.

There is also a question of correlation and causation. Personal insecurity and despair tend to cause people to become conservative. Liberalism thrives on hope driven by prosperity, and a sense of personal and economic security.

Now, it certainly is true that "when whites are murdered anywhere in the country, the murderer is five times more likely to be white than nonwhite." But, this is really the only sentence in the piece that actually makes the point of the headline that  "White people should be more afraid of other whites than they are of people of color". So, while it is true, it is less impressive than it seems. Contrary to the implication of the title of the op-ed, whites who live in mostly white areas are not at a greatly higher risk of being murdered than people in more ethnically diverse areas, even though living in mostly white areas is not nearly as protective from murder as it is often believed to be, and is not as protective from murder as it has been historically in recent history.

Murder rates for whites alone are, on average, higher in the South and Appalachia, which lean strongly Republican, than they are elsewhere. But, murder rates are also lower in other rural areas, like the Great Plains and rural areas of Mountain States, where Republicans are predominant. And, in general, murder rates are higher in urban areas than in rural areas. So, the notion that whites in Republican leaning areas have more to fear than urban whites isn't actually nearly as clear as the headline and the points made with somewhat misleading combinations of data suggest.

Now, the case that deaths of despair are much more common in Republican areas than in Democratic leaning, ethnically diverse areas is certainly true in spades.

In addition to the issue of causation that I mentioned, economics is at work.

This migration makes U.S. big cities which are full of the most economically productive people in the U.S. and often the world, very prosperous places where there is little despair. But, this means that rural America is suffering a never ending brain drain, as the best and brightest of their children leave their communities, and the worst and the dullest stay behind. Because, the productivity benefits that skilled higher income people realize by moving to big cities is a phenomena that is mostly absent for less skilled, lower income workers. Working class people don't earn much more in the big city than they do in rural areas, but have a higher cost of living in big cities than the do in rural areas. So, they tend not to migrate away from their hometowns and instead stay in communities that have little opportunity for them or their children. Is it any surprise, given that reality, that these areas see far more deaths of despair?

It also isn't too surprising that Democrats focus on making the pie bigger, while Republicans see the world as a zero sum game, because that reflects their respective environments. In prosperous big cities where Democrats live, life isn't a zero sum game and cooperation routinely gives rise to economic growth. But, in rural areas where Republicans live, the economy is stagnant, so economic gains for one person always tend to come at someone else's expense.

Almost all of the mountain states and Alaska, both red and blue and regardless of their rates of firearm ownership or level of urbanization, have significantly higher suicide rates for non-Hispanic white men, relative to their homicide rates. It is not at all obvious why this is the case, even thought the pattern is quite clear. One 2013 study, which also notes high suicide rates among smokers and people with diseases associated with poor lung function, blames this pattern, quite convincingly, on the altitude. The study, by Simon N. Young, in a peer reviewed journal, is entitled:

The abstract to this paper states:


Recent research indicates that suicide rates are elevated in those living at higher altitudes in both the United States and South Korea. A possible mechanism that was proposed is metabolic stress associated with hypoxia. This commentary discusses these results, and also the association between elevated suicide rates and other conditions associated with hypoxia (smoking, chronic obstructive pulmonary disease and asthma). Tryptophan hydroxylase may not normally be saturated with oxygen, so mild hypoxia would decrease serotonin synthesis. Low brain serotonin is known to be associated with suicide. Thus, the commentary proposes and discusses the hypothesis that decreased brain serotonin synthesis associated with hypoxia is a mechanism that may contribute to suicide in conditions causing hypoxia. Finally the commentary proposes various studies that could test aspects of this hypothesis.

The trends are quite different for black men as shown in the chart below from the same source as the one above. The chart for black men omits Hawaii, Idaho, Iowa, Maine, Montana, North Dakota, New Hampshire, South Dakota, Rhode Island, Utah, Vermont, and Wyoming due to small sample sizes. 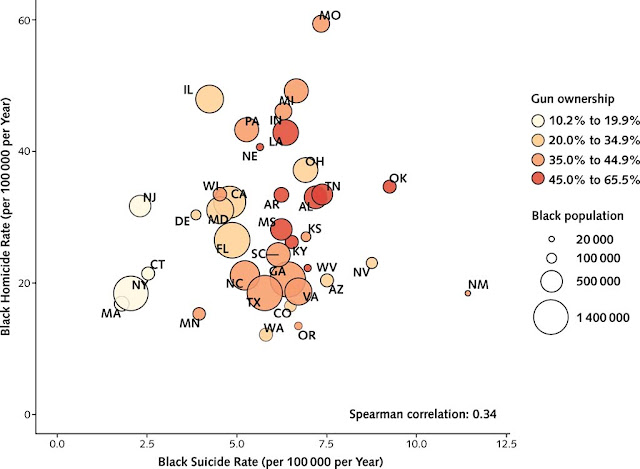