Against Marxist Economic Thinking On The Political Left

I am a liberal. I might even be a neo-liberal, whatever that is.

I am a liberal, both with regard to social issues and with regard to economic issues. I push for reform of our political economy and culture on a daily basis to address its flaws. I think we need to do more to protect the environment, to make our society less racist, sexist and homophobic, to treat the poor better, to guarantee a certain level of economic well being to all, and to concentrate wealth less than our society does. I think that businesses need to be regulated to discourage them from engaging in conduct harmful to the rest of society.

But, I also do so coming from a place in which I see that our political economy and culture have enough good in them to make them worth reforming, rather than seeking to utterly destroy them.

I am hardly alone in my outlook, but my views are certainly not unanimous on the political left either.

The political left in the United States includes a significant number of very active participants who have what is basically a Marxist outlook on the economy, that I do not agree with, although that label has gone out of fashion, and is now more often called "progressivism" or some subset of it. I've noticed a strong trend among my "Facebook friends" towards this outlook, which in part represents a changing political climate, but also may represent in part, the fact that I have recently roughly doubled the number of friends I have on Facebook from about 500 to more than 1000, mostly by becoming friends with people who share a connection to Democratic and liberal political activism with whom I have mutual friends despite not knowing them personally.

Some of the ideas thrown out frequently with which are disagree on that front include the beliefs that:


1. Income and wealth are so concentrated that people outside the 1% (or less) of the population that are extremely affluent that everyone else is living more or less in squalor. For example, statements like this: "I encourage you to take a glance at "Web of Debt" and contemplate whether economies ever work for anyone but the 0.01%."

2. The economy is basically a zero sum game in which the wealth of those who are successful in the economy is primarily derived from harm to, or exploitation of the poor and the working class.

3. Capitalism is inherently racist, and people who succeed in the economy do so primary as a result of white male privilege, rather than from any meritorious conduct that benefits society. For example, in response to my statement that: "A middle class American is much better off in material condition than people in the lion's share of the world and people for the vast majority of history. My life is better economically than an 18th century king, or the vast majority of people in Asia, Africa and Latin America.", there are responses like "how great that you are benefiting from white privilege in a country currently,. just as in the past, benefiting from the harm done to our poor."  Identity politics should strongly inform how economy behaves in a better world.

5. The stagnation of the economic well being of non-college educated Americans since the 1970s is the product of a bipartisan conspiracy of the affluent to keep down the less affluent for the economic betterment of their class.

6. The decline of unions in the U.S. is primarily due to improper political and legal efforts to bust unions and that the stagnation of the economic well being of non-college educated Americans since the 1970s is mostly the result of declining unionization caused by these policies.

8. Differences between individuals, families, social classes, and groups in the economy have little or nothing to do with differences in hereditary IQ or other genetic traits. Nurture and hereditary privilege is the predominant determinate of economic success.

9. People in STEM careers are unfairly better paid because STEM fields advance the interests of the military and the rich.

10.The supply of jobs is basically fixed and that it makes sense to think about issues like unemployment as being basically about a shortage of jobs.

11. The affluent deliberately allow and encourage periodic recessions so that they can buy up assets cheap and further exacerbate income inequality.

12. The affluent have complete control over the political system (at least short of violent revolution), primarily through bribery of politicians with campaign contributions and person economic gain, and they use that control to maintain their unfair privilege in society. For example, the statement that capitalism is a failure because it suffers "from: control by the few for their own benefit."

13. There is no really meaningful difference between the Republican Party and the Democratic Party, because neo-liberals in the Democratic party as so beholden to big businesses and the affluent.

14. Political and legal actors rarely act in good faith to try to do what is right and advances the common good as opposed to advancing the well being of themselves and people like them.

16. It is illegitimate for big business to have any political voice or influence, and the voice and influence that big business has comes predominantly from illegitimate bribery of elected officials and other powerful people in society.

17. Insurance companies are a key means by which the rich exploit the less affluent and add no economic value to society.

18. The financial sector is almost entirely a rent seeking institution that does not create any wealth or economically valuable goods and services.

19. Small family owned businesses are intrinsically more desirable in the economy than big businesses in almost every situation.

20. People should directly grow their own food, should strongly favor local food producers (especially small ones), and should produce as much of the energy that they use themselves as possible.

22. The best solution to shortages of affordable housing is to impose direct price controls and rent controls on housing.

23. People who disagree with this agenda do so because of their evil self-interest as they benefit from the system, or because that have fallen prey to pervasive propaganda that seeks to legitimatize socio-economic equality and patriarchy.

24. The media has a right wing corporatist bias and can't be trusted to tell the true story.

25. Criticism are Marxist economic ideas and policies based upon existing and historical regimes is meaningless because on one has ever practiced "true" Marxism. This quotation in response to my statement that "Marxism is not a solution to our world's problems" is typical: "Considering Marxism has never been tried how do you know?"

These viewpoints are merely representative to provide some of the flavor of what I am talking about. They certainly aren't comprehensive. But, I have made a good faith effort not to present straw man arguments that are weaker than the arguments that people who hold views about the political economy along these lines would not make themselves. 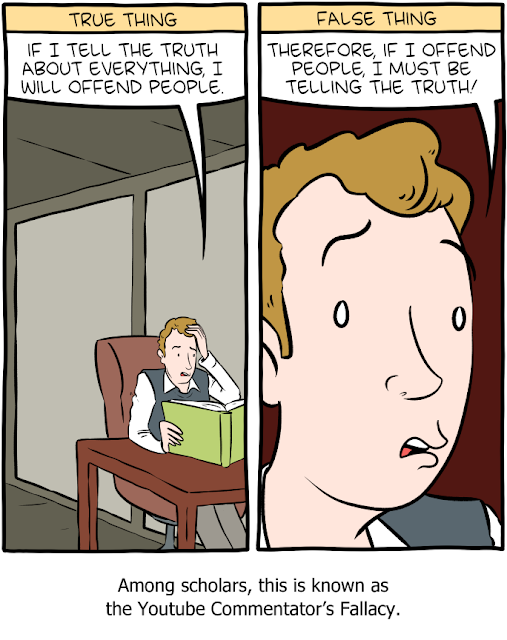 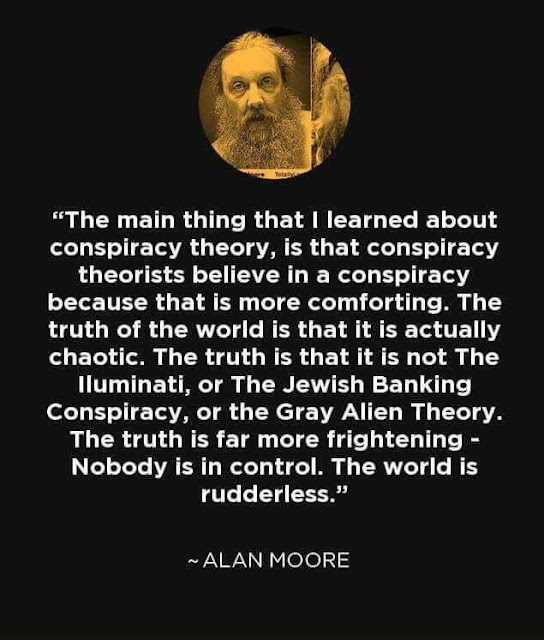 Some representative memes with my criticisms of them. 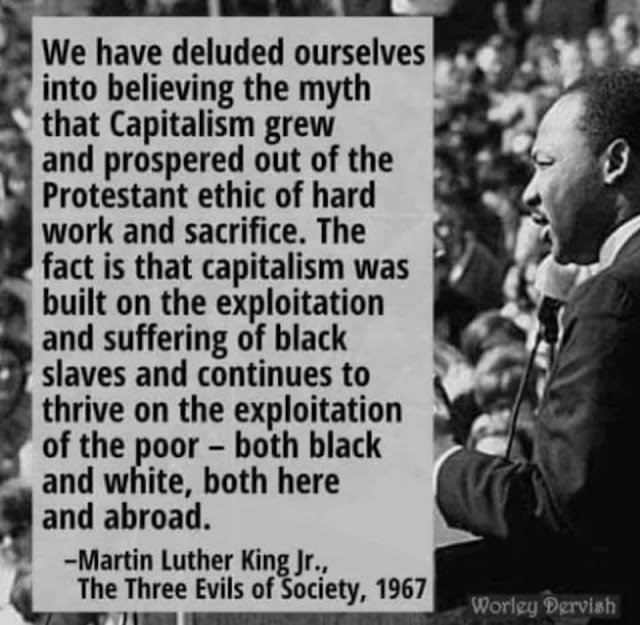 Not the most accurate history. Capitalism, as exemplified by the industrial revolution, first emerged in England proper where there were not any meaningful number of black slaves, although black slavery was a product of capitalism. And, MLK Jr. and Marxist economics notwithstanding, capitalism is largely indifferent to the poor whom it ignores and wishes didn't exist; it doesn't prosper primarily by exploiting the poor. Those who are most poor are not those at the bottom of the capitalist pyramid, but those who exist outside the capitalist system almost entirely. 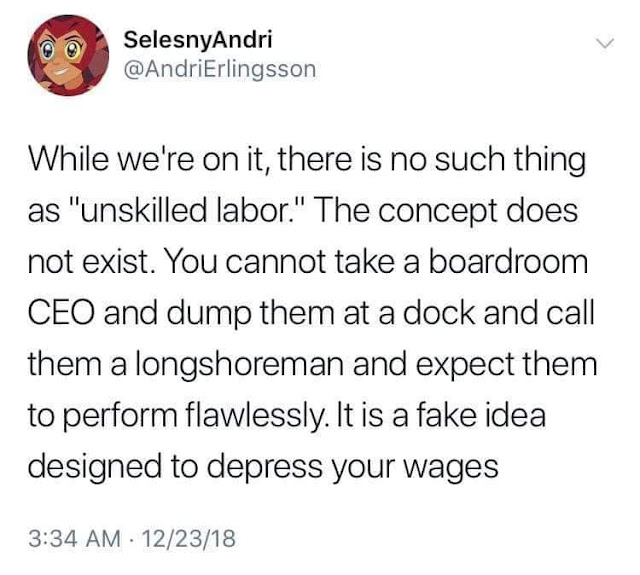 I don't believe this one either, even though it has superficial appeal. It is not a "fake idea". Actually, a lot of labor economics is well explained by the fact that more skilled workers can usually substitute to do less skilled work if they must, while the reverse is not possible. And, while skill differences do impact compensation differences in relative terms, that doesn't explain why your wages are "depressed", which is due to completely difference causes. Japan, for example, also distinguishes between workers based upon skill in the labor market and has a large developed economy but has far less income inequality than the U.S. (without a large public sector welfare state). 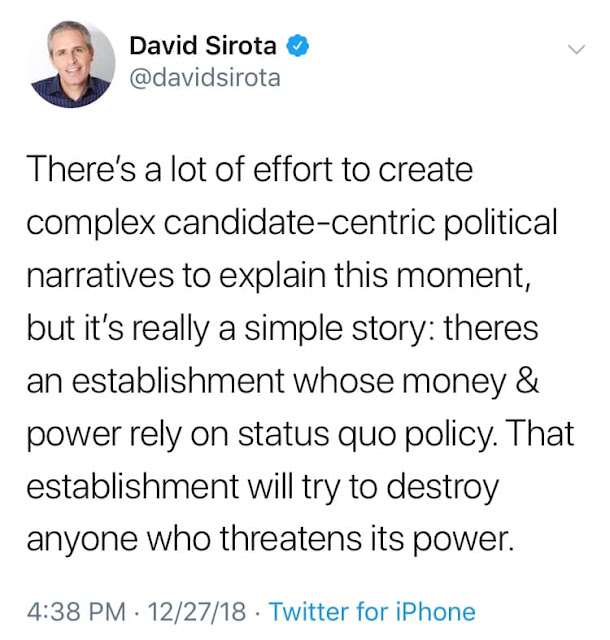 More misleading framing. People actually frequently defend the status quo because arguments for change are bad ideas for one reason or another. The notion that legislative change is merely a self-serving power grab grossly misstates the motives of the people involved.