Child Sexual Abuse Has Fallen Greatly Since The Early 1990s


As of 2016, the rate of substantiated child maltreatment has shown little change over the past several years. It is, however, considerably lower than in 1990, having fallen from 13 incidents per 1,000 children to 9 per 1,000. Rates of physical, sexual, and psychological or emotional abuse have declined the most since 2000, while rates of neglect have declined the least.

Reported rates of neglect are higher than those for other types of child maltreatment. In 2016, 7 children per 1,000 were reported victims of neglect, compared with 1.7 for physical abuse, 0.8 for sexual abuse, and 0.5 for psychological or emotional abuse (Appendix 2).


Other surveys show that the median age of first sexual intercourse is rising for both men and women, and that high school and younger students are having sex less often that they did in the previous few decades. Some trends from 1954 to 2003 are reported in this report. A nice chart illustrating the long term trend can be found here.

According to this source, as of 2017: Teen birth rates, and overall abortion rates, were at record lows as of 2017. "Adolescent pregnancies are also decreasing precipitously, down 55 percent between 1990 and 2011. Early data suggest those numbers will continue to fall: Birthrates for women between the ages of 15 and 19 declined an additional 35 percent between 2011 and 2016, hitting the lowest levels since CDC began collecting data."

According to this 2012 report: "In 2012, adolescents aged <15 and 15–19 years accounted for 0.4% and 12.2% of all abortions, respectively, and had abortion rates of 0.8 and 9.2 abortions per 1,000 adolescents aged <15 and 15–19 years, respectively. From 2003 to 2012, the percentage of abortions accounted for by adolescents aged 15–19 years decreased 27% and their abortion rate decreased 40%. These decreases were greater than the decreases for women in any older age group." Note that abortions performed for girls under the age of 15 are so rare that statistical significant becomes an issue in trend measurements except for very large sample sizes, since only one abortion in 250 involves a girl under the age of 15.


Internet access was first available for people other than scientists and military users in the early 1990s. By the year 2000, about 50% of Americans had Internet access, and it rose to about 84% by 2015. The rise of free pornography available over the Internet lagged only slightly behind the rise in Internet access generally.

The line for Internet use in developed countries, globally, on the chart below from Wikipedia, closely parallels the trends in the United States: 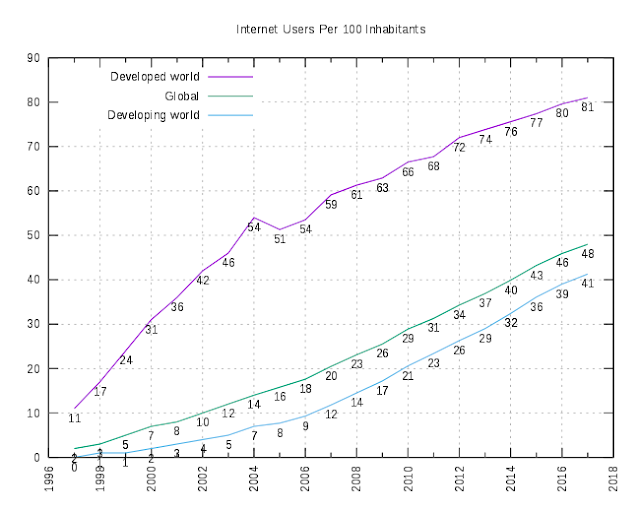 As shown above, the rise in rates of Internet access, which also brought the rise of access to free pornography videos, also coincides with large declines in the rate of sexual assaults overall, and record low teen pregnancy rates, teen birth rates, and teen abortion rates, including all time record lows for pregnancies in girls under age 15.

Notably, this source, while calling the numbers alarming, does not make any statements regarding whether this is become more or less common, or what proportion of child sexual assault cases this involves. It also provides no data demonstrating what share of these cases involve pornography viewing by perpetrators.

A different data set finds with regard to victims of child sexual abuse that:

Out of the yearly 63,000 sexual abuse cases substantiated, or found strong evidence, by Child Protective Services (CPS), the perpetrator was most often the parent:

Wikipedia examines the issue of child on child sexual abuse in this entry. It notes that:

The incidence of child-on-child sexual abuse is not known with any certainty, similar to abuse by adults. It frequently goes unreported because it is not widely known of in the public, and often occurs outside of adults' direct supervision. Even if known by adults, it is sometimes dismissed as harmless by those who do not understand the implications. In particular, intersibling abuse is under-reported relative to the reporting rates for parent-child sexual abuse, and disclosure of the incest by the victim during childhood is rare.

This implies that the long term trend in the rate at which this happens is unknown and may be heavily influenced by changes in reporting rate as opposed to changes in incidence rates.


It seems more likely that this is a case of "moral panic" at a time when the problem is actually becoming much less prevalent.

I am not claiming that greater pornography availability caused reduced rates of child sexual assault. In all likelihood, other causes were much more important.

For example, almost all other kinds of crime also became much less common in this time period.