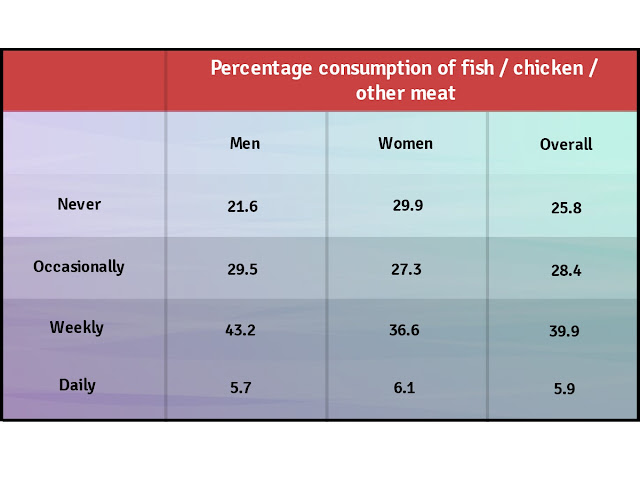 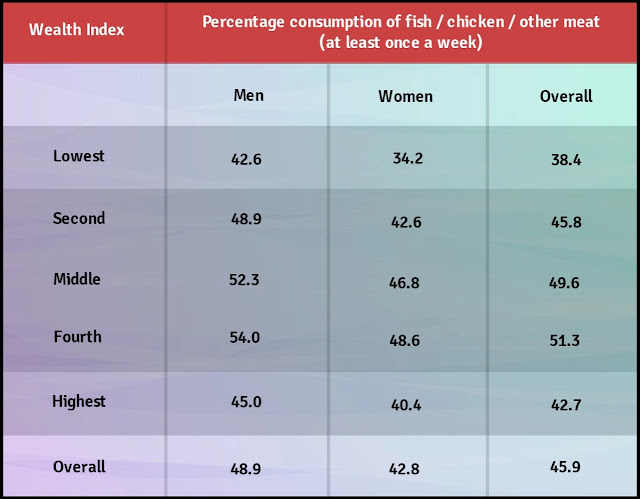 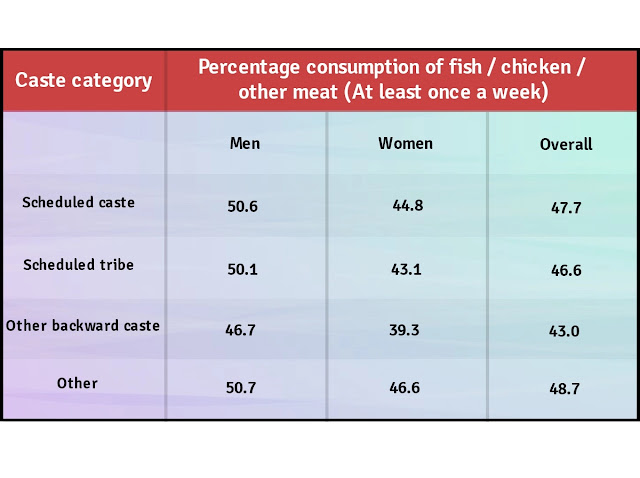 Note that "Other Caste includes both Christians and Muslims thus artificially inflating meat consumption for higher caste Muslims and in particular for Brahmins who by conventional wisdom are most likely to be vegetarian. 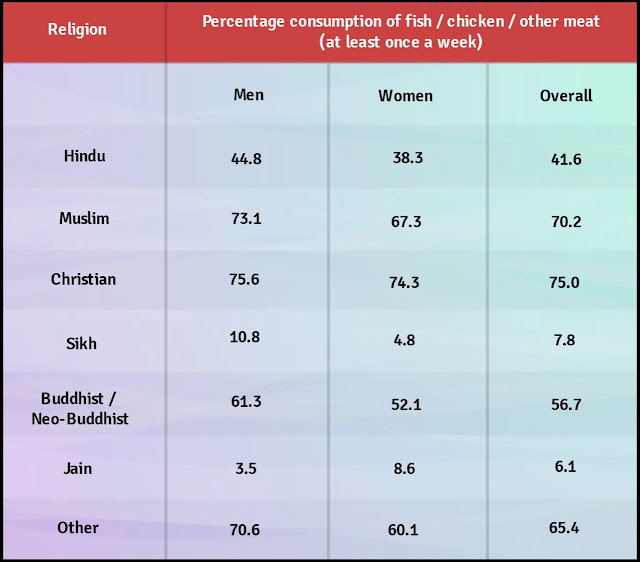 From here via Razib Khan's pinboard. State by state data that mirrors that in maps below are available at the link. Also, gender differences in meat eating are fairly modest in most of India, but in North India, women consistently eat meat much less frequently than men.

There is considerable regional and ethnic variation in vegetarianism  and meat eating in India, however. 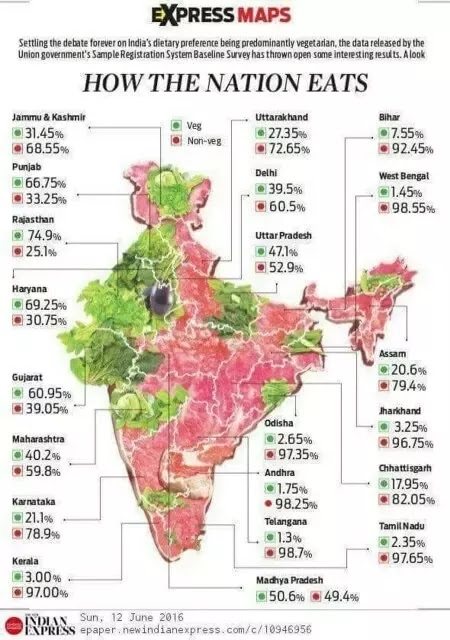 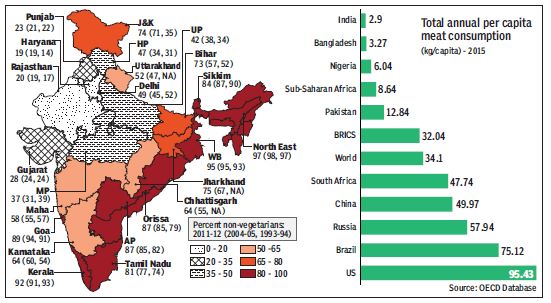 Beef and buffalo eating, in particular, is not eaten by many people in India, although this percentage varies greatly by religious affiliation:

Around 63.4 million Muslims consume beef/buffalo. That adds up to 40% of the total Muslim population. For Christians, this figure is around 26.5%. Although, less than 2% Hindus eat beef/buffalo, they are ranked second in absolute terms. More than 12.5 million Hindus consume it.

Most of the geographic diversity in vegetarianism and meat eating in India, however, is within majority Hindu regions and is only modestly impacted by the percentages of non-Hindus in each region.

The historical basis of the wide regional intra-Hindu vegetarianism and meat eating frequency isn't readily apparent, although areas that are linguistically Indo-Aryan are more likely to be vegetarian than areas that are linguistically Dravidian, Munda or Tibeto-Burmese. Meat eating may reflect a thinner Indo-Aryan influence even in places that experienced a language shift to Indo-Aryan languages. Vegetarianism may alternatively reflect a stronger influence from the pre-Indo-Aryan Harappan society. 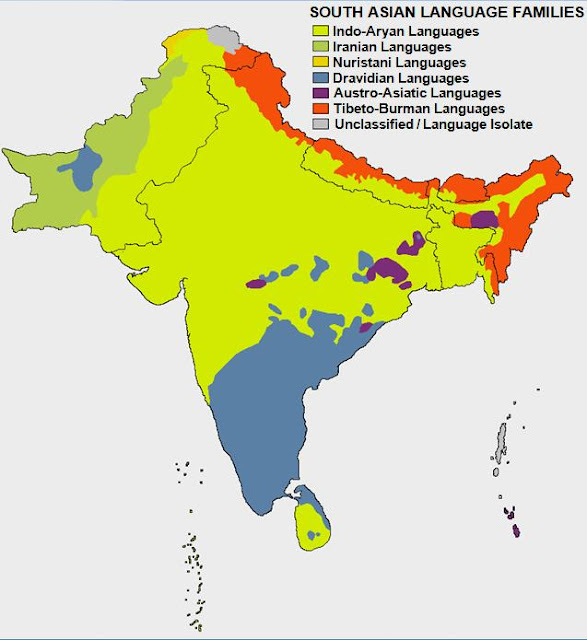 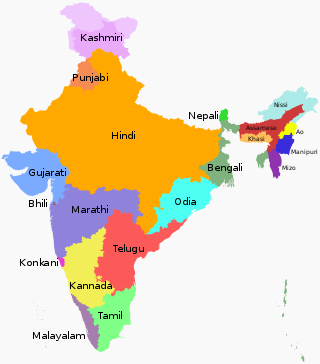 
The divide also roughly corresponds to the divide between places where Fertile Crescent Neolithic package crops especially wheat, millet and pulses are grown (which tend to be vegetarian), and those where Sahel Africa especially sorghum is grown, roughly overlapping with historically Dravidian areas, or East Asia Neolithic crops especially rice is grown, roughly corresponding to historically Munda and Tibeto-Burmese areas (both of which tend to be meat eating). 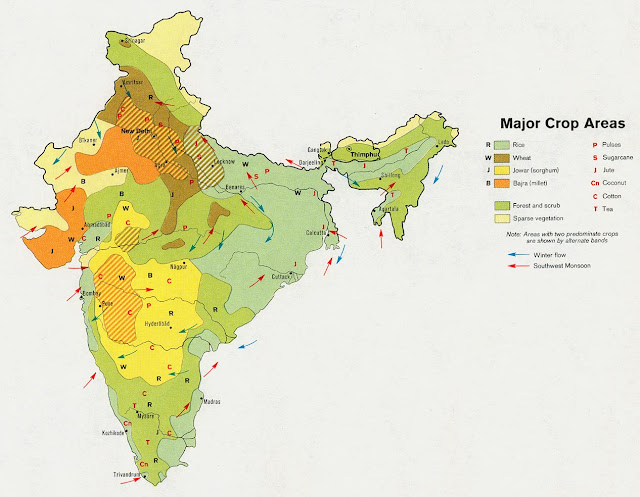 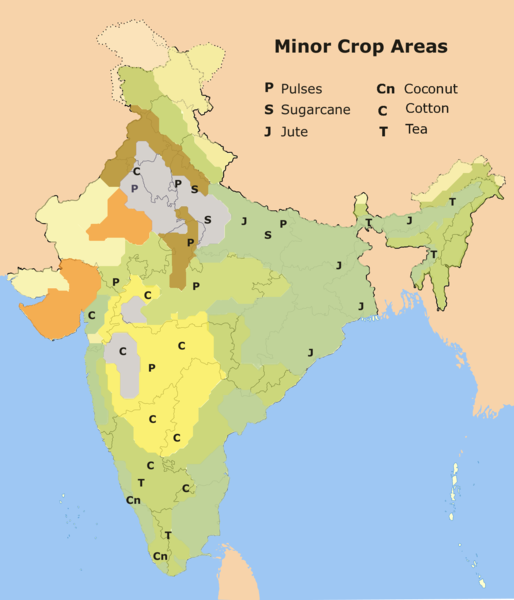 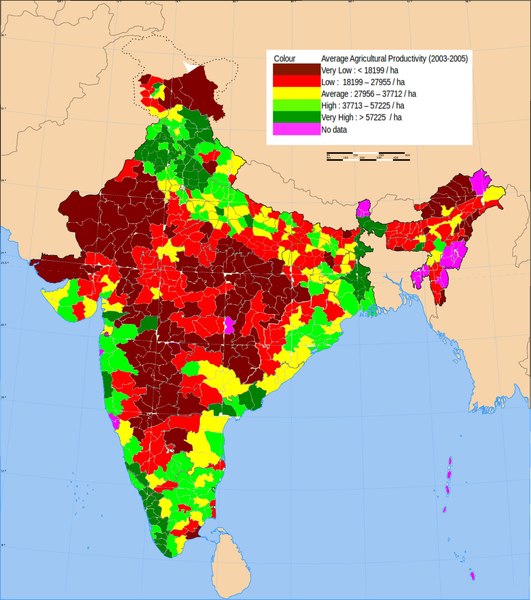 The correlation with India's natural vegetation zones is worse: 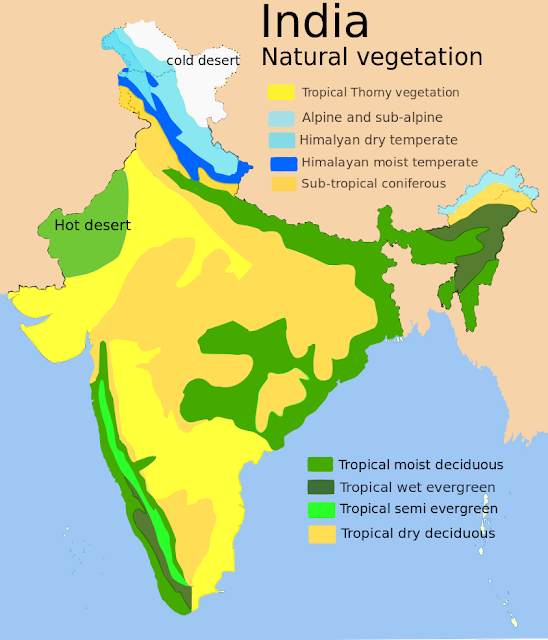 Another source suggests that Pakistan consumes 6.71 kg/year/person, while Bangladesh consumes 0.91 kg/year/person. These numbers are probably correct relative to each other.

A third source, however, suggests that Bangladesh consumes slightly more meat per year per person than India and does not have data for Pakistan. These relative numbers are also probably correct.

Conclusions Regarding Meat Eating and Vegetarianism

In India meat is consumed disproportionately by Christians and Muslims, with Muslims eating more meat than Christians and vegetarians are most common in the Northwest. Also, even among people who India who do eat meat, most of them eat meat only rather infrequently, and daily meat consumption is almost as uncommon in India as vegetarianism is in the U.S. (which as of 2015 is about 3.4% of Americans are vegetarian and about 0.4%).

Bangladesh consumes only a little more meat than India, despite being predominantly Muslim, while Pakistan consumes much more meat than either India or Bangladesh, even though it abuts the most strictly vegetarian parts of India.


In India, the religious mix is as follows: 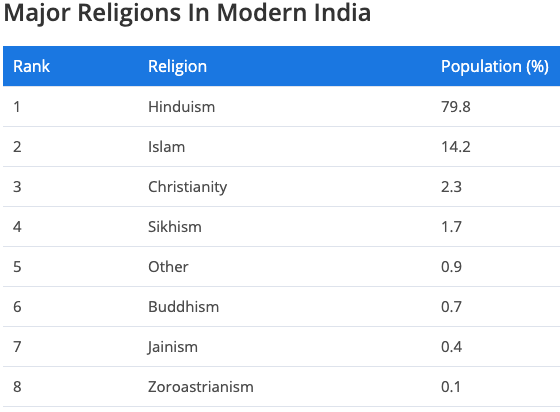 The majority of Indian Jews have "made Aliyah" (migrated) to Israel since the creation of the modern state in 1948. Over 70,000 Indian Jews now live in Israel (over 1% of Israel's total population). Of the remaining 5,000, the largest community is concentrated in Mumbai, where 3,500 have stayed over from the over 30,000 Jews registered there in the 1940s, divided into Bene Israel and Baghdadi Jews, though the Baghdadi Jews refused to recognize the B'nei Israel as Jews, and withheld dispensing charity to them for that reason. There are reminders of Jewish localities in Kerala still left such as Synagogues. The majority of Jews from the old British-Indian capital of Calcutta (Kolkata) have also migrated to Israel over the last six decades.

There is some geographic diversity in the religious mix of India although almost all predominantly Muslim areas were partitioned in West Pakistan (now simply known as Pakistan) and East Pakistan (now known as Bangladesh after Pakistan had a civil war). 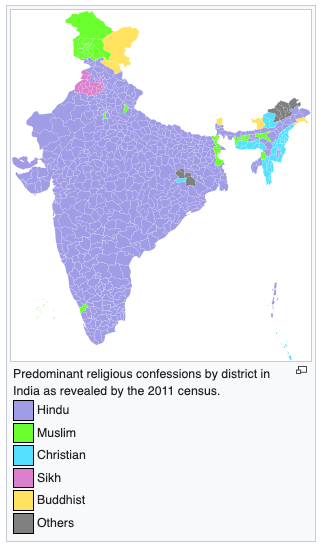 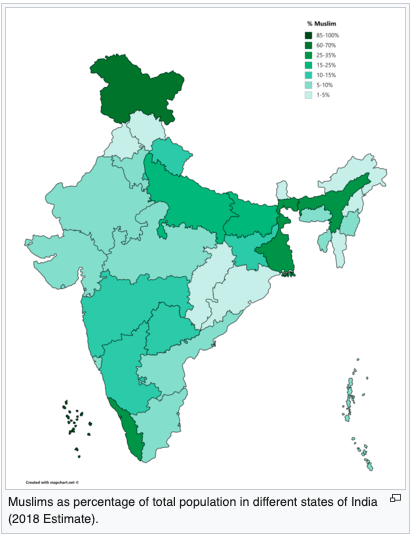 Muslims comprise a number of sects: the majority practice Sunni Islam, while 5–15% are Shias. Nearly all Pakistani Sunni Muslims belong to the Hanafi Fiqh Islamic law school. The majority of Pakistani Shia Muslims belong to the Ithnā‘Ashariyyah Islamic law school, with significant minority groups who practice Ismailism, which is composed of Nizari (Aga Khanis), Mustaali, Dawoodi Bohra, Sulaymani, and others. Many Muslims of both types in Pakistan are also considered to be Sufis.

According to this source (see also here):

The major religion in Bangladesh is Islam (90%), but a significant percentage of the population adheres to Hinduism (9%). Other religious groups include Buddhists 0.6%, (mostly Theravada), Christians (0.3%, mostly Roman Catholics), and Animists (0.1%).

The majority of Bangladeshis are Sunni. They follow the Hanafi Islamic jurisprudence, but there is also an increasing numbers of the Ahle Hadith.  Specifically about 96% are Sunni Muslim, 2% are Shia Muslim, 1% are "nondenominational" Muslim, and 1% are "other Muslims". About 26% of Muslims identify as part of a Sufi Muslim order.


The percentage of the population that is Muslim in the sixty-four districts of Bangladesh varies from 29.28% to 97.79%, and four of the sixty-four districts are not majority Muslim. One more is 63.53% Muslim. The other fifty-nine districts in Bangladesh are more than 70% Muslim.
Posted 2:13 PM
Email ThisBlogThis!Share to TwitterShare to FacebookShare to Pinterest
Tags: Agriculture, anthropology, Climate, culture, Economics, Feminism, food history, History, India, language, Personal Conjecture, Religion, Social Class