Other Humanities Disciplines Following In The Steps Of Classics

The Decline of Classics

For centuries, the sole admission requirement to Yale and Harvard was fluency in Latin and ancient Greek. Latin was a required course in the vast majority of high schools until after the 1950s.

In addition to the sense that this was obsolete in the modern job market, the decision of the Roman Catholic Church to conduct its church services in vernacular languages rather than Latin, for the most part, also greatly decreased demand for the subject.

Now, college bound high school students are required to study English, Mathematics, Science and Social Studies, as well as a foreign language and some sort of creative or performing art subject, with very few of those students using Latin or ancient Greek as their foreign language (Spanish, French and German are predominant).

My daughter's freshman year roommate in college stated she intended to major in "classics", thinking it meant classic English language books, TV and music, instead of classical Greek and Latin language and literature.

Latin is a rare sight indeed for high school students outside of some magnet schools in Boston, and many colleges and universities don't offer it at all. According to Wikipedia:


In the United States, Latin is occasionally taught in high schools and middle schools, usually as an elective or option. Latin is often taught in Catholic secondary schools, and in some of them it is a required course. More than 149,000 Latin students took the 2007 National Latin Exam.

By comparison, there are about 3.7 million high school graduates in the United States per year, and more students who enter high school as freshman each fall who won't ultimately graduate from high school.

About 6,400 out of the about 4 million AP exams (about one in 625 AP exams) that are taken each year (often more than one per student), are in AP Latin, and about 63% of those who take the exam receive a passing score of 3 on a 5 point scale or better.

According to the College Board, right now:


Approximately forty universities, colleges, and religious seminaries in the United States offer [a major in Classics].

Most people studying Latin or ancient Greek in college are doing so to prepare for theology studies and classical music vocalists, and those too are in decline. For most of academic history, the primary purpose of higher education was to prepare clergy.

It has always been the case that far fewer native speakers of the English language have studied ancient Greek than Latin, as ancient Greek did not survive as a liturgical language, only as a dead language for historical interest and for translation of ancient Biblical texts.

The Decline Of The Humanities

As a new set of essays from the Chronicle of Higher Education explains:

The number of jobs in English advertised on the annual MLA job list has declined by 55 percent since 2008; adjuncts now account for all but a quarter of college instructors generally. Whole departments are being extirpated by administrators with utilitarian visions; from 2013 to 2016, colleges cut 651 foreign-language programs. Meanwhile the number of English majors at most universities continues to swoon.

In a recent year, Columbia University's English Department couldn't place a single one of its newly minted PhDs in a tenure track position teaching English.

The plight of newly minted PhDs seeking English Department faculty employment is also plagued by the fact that a cohort of faculty already hired has been slower to retire than their predecessors (in part due to factors like increased life expectancy among people with good health insurance and stable incomes), even as the demand for English professors has fallen dramatically. 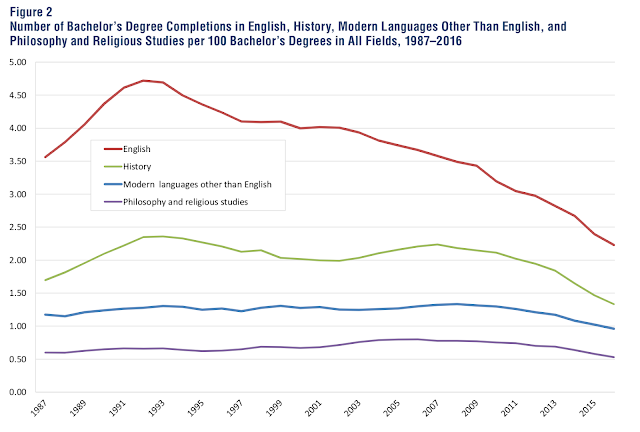 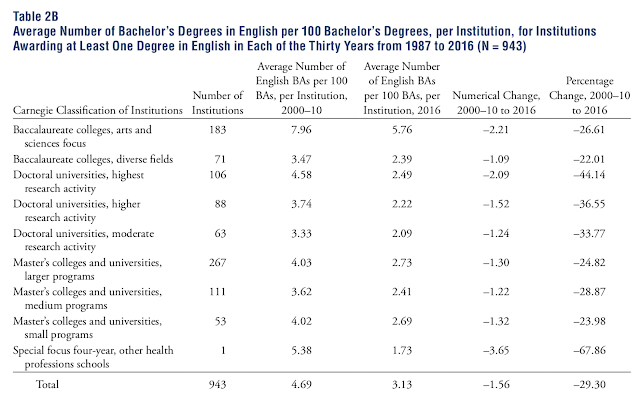 From 1991 to 2012, humanities bachelor’s degrees enjoyed a period of relative stability, according to the report, which drew on data from the National Center for Education Statistics. During that time, the number of bachelor's degrees in English averaged about 52,684 per year. But the number of degrees awarded in English has fallen each year since 2012, to the lowest point since 1989: some 42,868 degrees in 2016, the most recent year for which data were available. . . . other humanities fields have suffered the same downward trend.

From Inside Higher Ed.

It was worth observing that this is a series of event that I have watched up close to some extent.

My wife was an English major, a degree that she earned in 1993, the peak year of popularity for the major. Then, after earning a Master's degree in American Studies (in connection with which she was a teaching assistant for Women's Studies courses), she was an adjunct in the English Department at Mesa State College (now called Colorado Mesa University) for about a year, teaching English composition, after which she worked in the admissions department there for a couple of years.
Posted 12:48 PM
Email ThisBlogThis!Share to TwitterShare to FacebookShare to Pinterest
Tags: Academia, Economics, Education, Higher Education, intellectual history, personal reflections, Religion