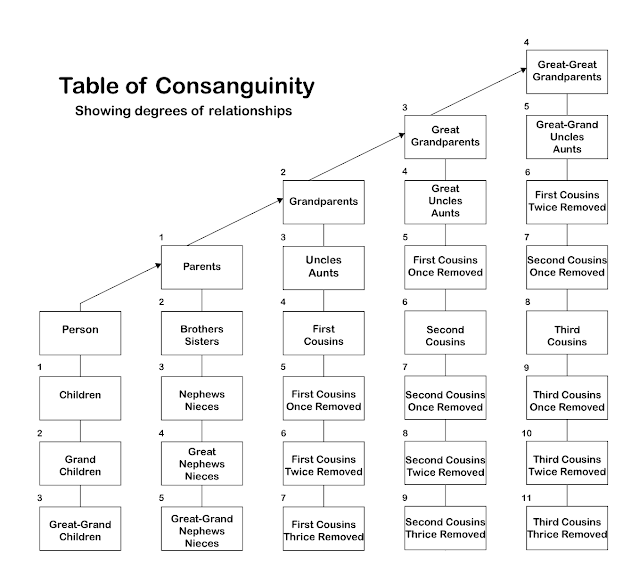 But not everybody is familiar with the kinds of kinship relationships below, which are graduate school level blood relationships.
Half and Three-Quarter Sibling Relationships
Relationships that produce three-quarter siblings are not incestuous (although circumstances like a stepfather having a child with both a wife and a stepchild through that wife are, at a minimum, frowned upon and sometimes illegal).
Three-quarter siblings can arise in polygamous marriages (which are permitted in most of Africa and in most places with significant Muslim populations) and sequential multiple marriages and relationships (which are becoming increasingly common in the Western world) between related partners. 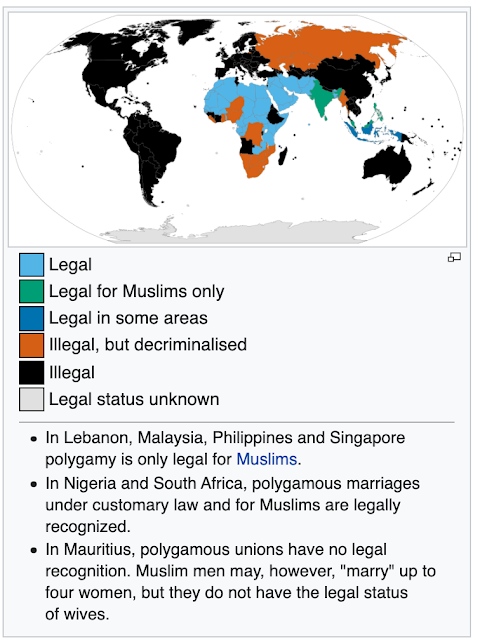 The Legality of Polygamy. From Wikipedia.

Islamic law is usually interpreted as allowing but disfavoring polygyny with up to four wives at a time. But it prohibits all or more polygynous marriages that produce three-quarter siblings as Mahram (see also here). Other cultures that allow polygamous marriages actually prefer polygamous marriages that produce three-quarter siblings (for polygynous cases see here). For example, in the Himalayan Mountains, one of the main areas where polyandry has been practiced, brothers marry the same wife to prevent scarce land owned by the parents of the brothers from being divided.

There are two kinds of half-siblings, with varying degrees of consanguinuity (blood-sharing):

A sub-group of half-siblings are three-quarter siblings (3/4 or 0.75). This occurs when the unshared parent has mean consanguanuity of 50%. This includes full siblings and parent/child. There are two kinds of 3/4 siblings:

An increasingly common situation is for someone to have a great many half-siblings through a common anonymous sperm donor. For example, 150 half-siblings in one documented case. See also here:

There are no records of how many sperm donations are made every year in the US, nor of how many children are conceived, but it is frequently said to be between 30,000 to 60,000 births per year. [Wendy] Kramer with the DSR [Donor Sibling Registry] argues that number is woefully out of date.
Still, the scandals tend to find the media spotlight. There was the man whose samples were used to produce more than 150 children, the many parents who end up unintentionally having children of different races (in one instance because a clinic was said to have confused “Donor 380” with “Donor 330”), the woman whose dead husband’s samples were misplaced and allegedly used to impregnate other women, or the Georgia clinic that allegedly marketed a donor to hopeful parents as a neuroscience genius studying a PhD in engineering but who was in reality an ex-con who had never attended college and had a history of psychiatric hospitalization. His sample has been used to conceive at least 36 children. . .
A 2018 survey of almost 500 donor-conceived people conducted by Kramer’s website found that almost a quarter of them had used DNA testing to track down their donor.
As more donor-conceived children find their biological parents and half siblings, new and extended family units are forming. One 2016 study of 419 donor-conceived children found more than a third of them get together once a year with the half siblings they’ve discovered, and a fifth of them meet up together several times a year. Some 42% of them said they considered their half sibling to be part of their immediate nuclear family.

Here’s the run-down on various types of twinning. I threw in chimerism because this is essentially reverse-twinning and thereby relevant to discussing numbers of eggs and sperm and egg fusion events. 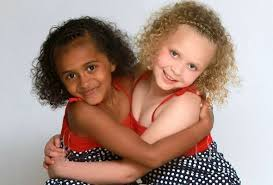 It is also possible for ordinary fraternal twins to appear to be heteroparental mixed race twins (a.k.a. "mixed twins") when, in fact, that were full siblings who simply inherit different genes from parents who have ancestry from more than one continent, most often in interracial marriages, but also in the case of children of people with mixed race ancestors even if both parents are identified as belonging to the same race, something that is true to some degree in the United States for almost all African-Americans, and for most Native American and Hispanics. 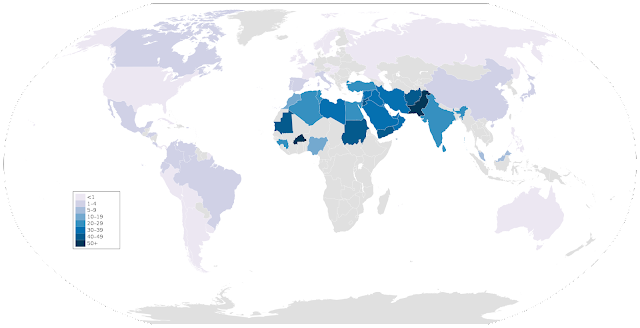 Cousin marriage rates. Image from Wikipedia.
Double cousins are uncommon, but not particularly rare, in places where cousin marriage is common (mostly in certain subsets of the Islamic world, such as the Arab world where about 45% of marriages are between cousins (see also here), and in North Africa, West Asia, and South Asia).
Twenty-five U.S. states ban first cousin marriage (under laws mostly adopted in the post-Civil War era). In the U.S. about 0.2% of marriages (involving about 250,000 people) are between people who are second cousins or more closely related and studies have shown that first cousin marriages present only slightly elevated health risks (1.7% to 3.5% higher) unless they are double cousins or otherwise highly inbred (in which case health risks are significantly elevated).

Double cousins are when two siblings of one family have children with two siblings of another family (brother/brother, sister/sister or brother/sister, sister/brother).
The children are related to each other through both of their parents and are considered double related.
Double second cousins can happen in two ways.

* From the relationships two double-first-cousins with two other persons.
Double first cousins share both sets of grandparents and have twice the degree of kinship of ordinary first cousins.
How Does This Affect Genetics and DNA?
Genetically, double cousins could test with numbers consistent with half-siblings.
Normal first cousins (cousins with one parent of each as a sibling while the second parents are unrelated), can share roughly 12% of their inherited DNA. Double cousins, because both parents are siblings to each other, can share roughly 25% of inherited DNA.
This is the same amount of DNA that you would share with a grandparent, a half-sibling or an aunt or uncle.

The family tree below is an example of double cousins. Anna and Marie Clemens are sisters, twins as a matter of fact. Joseph and Theodore Schneble are brothers.