COVID So Far In The U.S.

The U.S. population is about 330 million people.

About 542,000 people have died of COVID-19 in the U.S. (in a single year, making it a leading cause of death that didn't exist before and much worse that the flu). The deaths are at the high end of what I predicted a year ago in March. About 30 million people have tested positive for it (about 9%), but closer to 108 million have had it (about 32%), many of whom were asymptomatic or only mildly so, and not tested. (From here).

And, about 84 million have received at least one dose of vaccine (some of whom overlap with those who have had it) which is 66.8% (two-thirds) of the priority population and 24.5% of the total population After a surge starting about that time, cases are at late October levels again and overall falling, and deaths are at early November levels and overall falling. Vaccinations is carefully targeted at those most at risk of death or serious cases not leading to death from COVID-19 so the proportion of cases resulting in deaths should fall as vaccination rates rise. (From here). 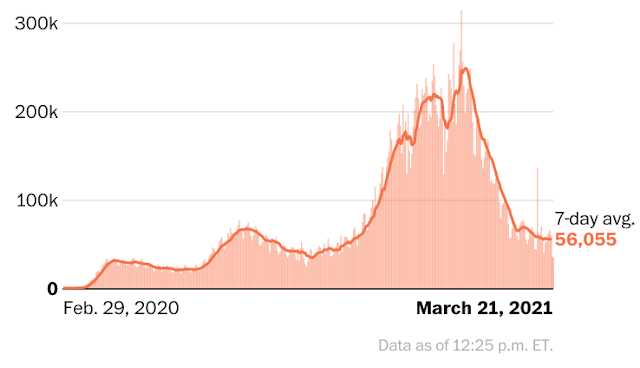 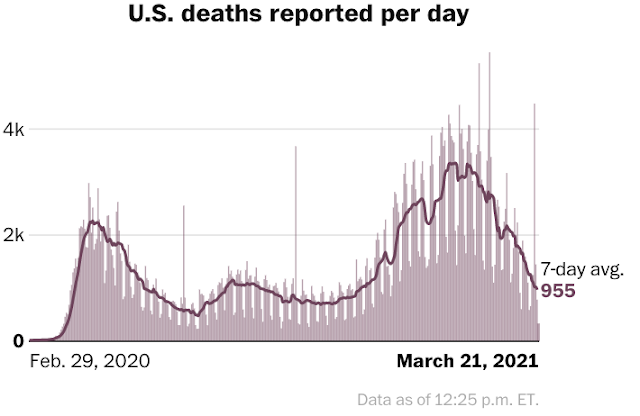 My best estimate is about 50% of Americans have some sort of immunity, either via a previous infection or a vaccination. 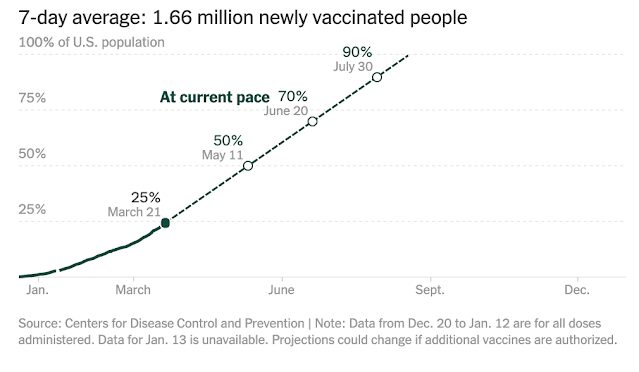 Basically, it took a year to come up with a vaccine (which is incredibly fast), and it will take about six months to have it very widely administered.

Whether the pandemic lasts after that depends largely on the infection and spread rates of new variants on people with old vaccines and previous infections with old strains, as well as on how fast booster shots for new strains can be developed and distributed.

I worked my hospital's covid ward. Definitely not the flu! I see otherwise intelligent and informed people say that we are confusing many flu cases and exaggerating the numbers of covid cases. Absolutely not. The symptoms of severe acute covid are different, and the lab values from blood and sputum are very different. Even without a specific covid or flu test we can easily determine if a patient has covid or not.

The comparison to the flu is only made as a reference point for the magnitude to the mortality and morbidity estimate.