The chart below looks at housing affordability nationwide in the United States over the last fifteen years or so, which is a baseline against which local real estate market can be compared. 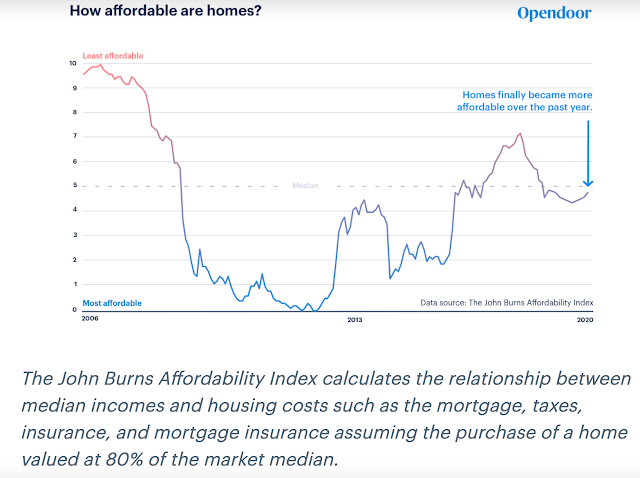 From here.
Housing was least affordable, in recent memory, at a 2006 peak, was maximally affordable around the 2008-2009 financial crisis when the real estate bubble in some key markets collapsed, and is currently at roughly a mid-point between those extremes.
Mortgage interest rates remain very low, and median incomes took much less of a hit due to COVID-19 than one might expect, which tends to make housing more affordable. But on the other hand, occupant owned residential real estate prices have mostly held steady or increased, despite the fact, noted in a Consumer Financial Protection Bureau report released yesterday that

warns of widespread evictions and foreclosures once federal, state, and local pandemic protections come to an end, absent additional public and private action.

According to the Mortgage Bankers Association, 2.6 million mortgages (5.23% of the total) are currently in forbearance plans.

Median housing prices basically track the desirability of a location, which in most, but not all cases, tracks the job market for people with college degrees, some college, or a skilled trade, who make up the lion's share of the roughly two-thirds of Americans who own their own homes. Much of the U.S. has fairly affordable housing due to weak economies or other factors that make those locations undesirable.

Median housing values by state (in absolute terms) are summarized in the following map: 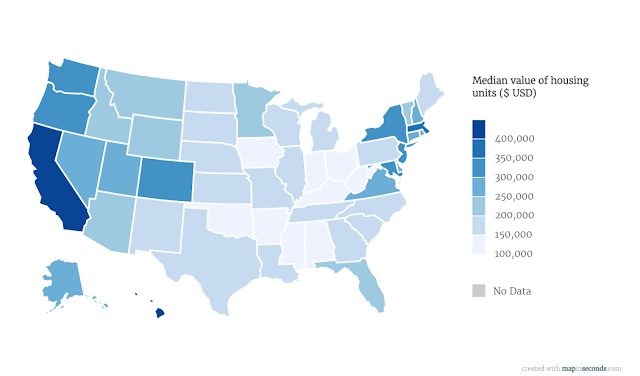 Inequality in the United States has an important spatial component. More-skilled workers tend to live in larger cities where they earn higher wages. Less-skilled workers make lower wages and do not experience similar gains even when they live in those cities. This dynamic implies that larger cities are also more unequal. These relationships appear to have become more pronounced as inequality has increased.

Median housing value in a state fairly closely tracks its current partisan leanings, although the mountain states are more conservative and New England is more liberal than this benchmark would suggest.
Democrats do well in larger cities, places with higher population density, places with higher rates of educational attainment and places with higher housing costs, all of which are associated with higher wages and greater economic inequality.

The state by state picture (relying on the data source below) that I have compiled is as follows: 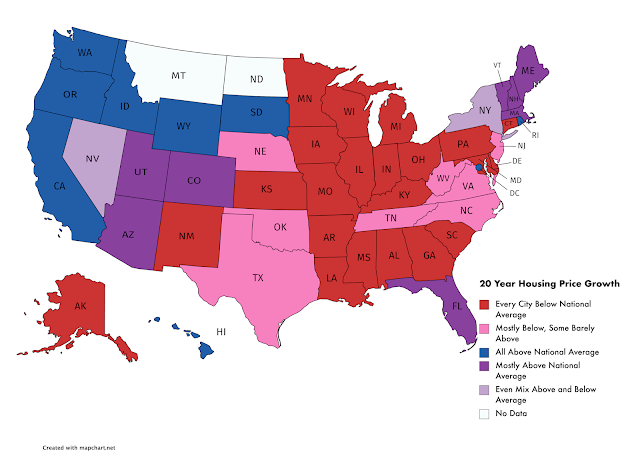 The urban areas in California, Oregon, Washington and Hawaii have seen housing prices rise much faster than the national average over the last two decades: 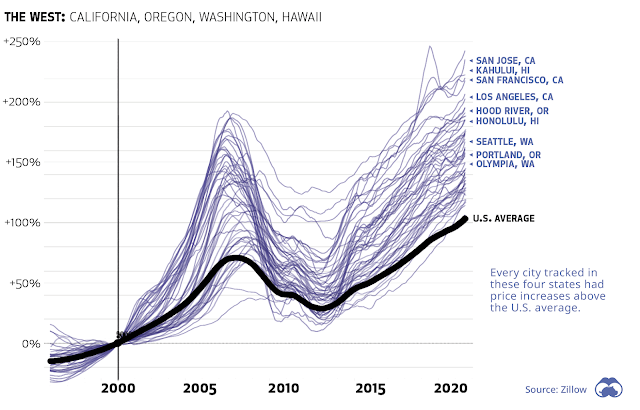 Meanwhile, according to the same source, housing prices in Rust Belt cities have lagged behind the nation as a whole: 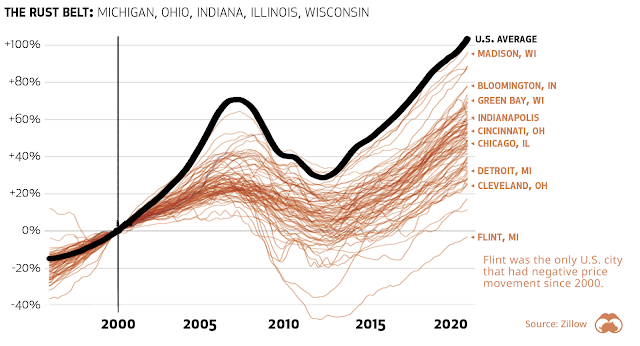 Of the top 20 U.S. metros, Detroit and Chicago saw the slowest price growth over the past two decades. Flint, Michigan, was the only city in the country to see a price decline.
At the state level, Illinois, Michigan, and Ohio were the bottom three in terms of home price appreciation.

In Oklahoma, only three small cities out of twenty cities tracked in the state outpace the national average and those cities only do so by modest margins.

In Nebraska, only Columbus outpaced the national average, while four other cities including Omaha, lagged.

In West Virginia, eight of of nine cities lagged, while the small city of Logan had housing prices grow slightly faster than the national average.

In Nevada, Reno and Carson City are seeing faster than average increase in housing prices, while Las Vegas has lagged significantly behind the national average.

No Texas city has seen housing prices rise significantly faster than the national average and most lag well below it.

Every Arizona city except Tuscon and Yuma has housing prices that are growing significantly faster than the national average. 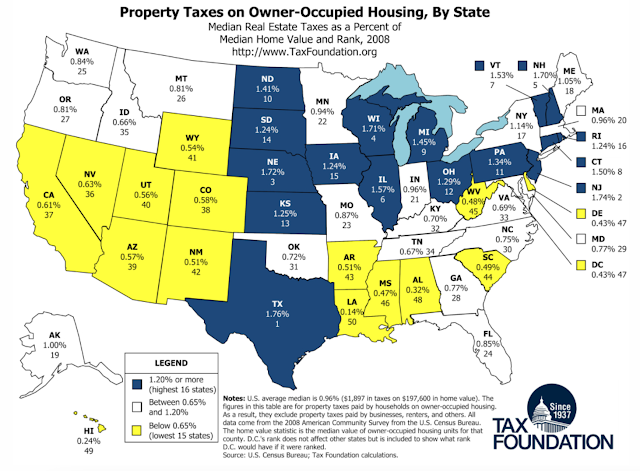 For states, the top three are Texas, Nebraska, and Wisconsin and the lowest three are Louisiana, Hawaii, and Alabama.

The top county in the country is Orleans County, New York; the lowest, St. John the Baptist Parish, Louisiana.