Nuclear power has lots of benefits that this proposal for a 1-5 megawatt portable nuclear power plant illustrates well. I'm not convinced that it is a great solution near war zones, however.
Portable Nuclear Power Plants 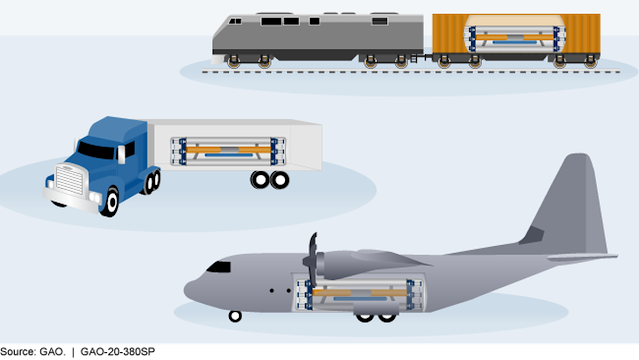 The Pentagon has selected two companies to move forward with developing small, portable nuclear reactors for military use in the field.
BWXT Advanced Technologies and X-energy were chosen by the department’s Strategic Capabilities Office to continue on with Project Pele, which seeks to develop a reactor of 1- to 5-megawatt output that can last at least three years at full power. In addition, the reactors must be designed to operate within three days of delivery and be safely removed in as few as seven days if needed.
The two companies, along with Westinghouse Government Services, were each given preliminary contracts of less than $15 million in March 2020 to begin design work. The final design is due to the Strategic Capabilities Office in 2022, at which point the Defense Department will make a decision on whether to move forward with testing the systems.
“We are thrilled with the progress our industrial partners have made on their designs,” Jeff Waksman, Project Pele’s program manager, said in a statement. “We are confident that by early 2022 we will have two engineering designs matured to a sufficient state that we will be able to determine suitability for possible construction and testing.”
The Pentagon has long eyed nuclear power as a potential way to reduce both its energy cost and its vulnerability in its dependence on local energy grids. According to a news release, the Defense Department uses “approximately 30 Terawatt-hours of electricity per year and more than 10 million gallons of fuel per day.”
According to an October 2018 technical report by the Nuclear Energy Institute, 90 percent of military installations have “an average annual energy use that can be met by an installed capacity of nuclear power” of 40 MWe (megawatt electrical) or less.
. . .
That effort, ordered in the 2019 National Defense Authorization Act, involves a pilot program aimed at demonstrating the efficacy of a small nuclear reactor in the 2- to 10-MWe range, with initial testing at a Department of Energy site around 2023.
While Project Pele is focused on the potential for deployable nuclear reactors, the acquisition and sustainment effort is focused on domestic military installations, with the goal of being operational by 2027.

A one megawatt power plant is enough to power about 500 homes.

If the illustration showing one unit fitting into a C-130 transport aircraft or a single semi-truck load or a single rail car is correct, the size would be on the order of 20 short tons to generate 1 megawatt of electricity for three years. Refueling in place for another three years, however, could involve a much smaller payload.

This is, at least, a factor of twenty better than the next best alternative (natural gas) in terms of logistics burden, and much better than that relative to diesel, coal, wind power, or solar power. The advantage is proportionately greater if the 20 ton portable nuclear power plant provided more than 1 megawatt of power. If it could produce 5 megawatts of power, the advantage would be a factor of 100 better.

The cost of such a power plant isn't clear.

If the power plant unit cost scaled proportionately to larger nuclear power plants, the cost of the power plant would be on the order of $1-$6 million for a 1 megawatt plant, but it isn't obvious that this is a reasonable assumption. It would have a useful life of several decades.

According to the same source, nuclear power plant fuel costs about $1,390 per kilogram and a kilogram of fuel generates about 360 megawatt hours of electricity. So, it needs about 73 kilograms of fuel for three years for a 1 megawatt plant at a fuel cost of $101,470 (far lower than any of the alternatives in addition to being much easier to deliver in a single trip).

Put another way, it takes about 1 gram of nuclear power plant fuel to power one house for one gram. The fuel cost for that one week is about $1.39.

Nuclear power plants also involve high level nuclear waste disposal issues that aren't currently resolved in the U.S. and would add additional cost. It would generate no air pollution, however. There are environmental issues involved in mining uranium, but because so little uranium is needed for fuel, these concerns shouldn't be overstated.

The national security concerns involved in keeping 73 kilograms of uranium based nuclear fuel safe from adversaries and preventing proliferation of uranium that could be used in nuclear weapons is a serious concern in a front line military application.

But the same concerns would not apply in civilian applications in remote domestic areas like small Alaskan villages or Hawaiian islands, where grid based power generation could be a problem.

Fossil fuels are far less portable, even without considering the power plants themselves.

How does natural gas compare?

A high efficiency, natural gas-fired combined-cycle power plant might consume about 7000 Btus of gas to produce one kilowatt-hour of electricity. That would be about 7 cubic feet of natural gas. It would therefoe take about 7000 cubic feet of gas to produce one megawatt-hour. In the U.S. today, one thousand cubic feet of gas sells at wholesale for about US$7.00 (seven dollars. So it would cost about $49 (wholesale price) just for the fuel to make 1 MW-hr of electricity this way.

So, 184 million cubic fee of natural gas would be needed to run a 1 megawatt power plant for three years. The fuel cost at U.S. natural gas prices would be about $1,288,000 over three years (in addition to the cost of the power plant).
A fully loaded semi-truck can carry about 11 tons of liquid natural gas (which means that 184 million cubic feet of natural gas is about eighteen truckloads shipped in liquid natural gas form).
The power plant costs about $215,000 (used without installation or delivery). See also here. The generator itself isn't huge (certainly less than one truckload, and probably less than about 20 tons).
Additional materials (and weight) to store the natural gas until needed might be required and might take another truckload or so.
The combined weight would be about 20 truckloads to operate it for three years.
A much more powerful 42 megawatt gas turbine electrical generator weighs about 151 short tons with a width of 170 inches, a length of 650 inches, and a height of 194 inches, in addition to a need for 90 square feet of duct flow areas at the inlet and 57 square feet of exhaust area. This would be 4.6 short tons if it scaled linearly, although it probably would actually weigh more than that because there are probably efficiency of scale.
This is far and away the lowest logistical burden of the fossil fuel alternatives, in addition to being much cheaper than the diesel generator option.
Natural gas produces the least air pollution, by far, of the fossil fuels, although the environmental impacts of producing natural gas through fracking are material.

It would take 2,102,400 gallons of petroleum liquids (50,058 U.S. barrels of oil, weighing about 7,359 short tons, or about 180 semi-tanker trucks full) to run a 1 megawatt power plant for three years. At about $3 per gallon for diesel fuel (commonly used by the military) it would cost about $6,307,200 to run diesel powered electricity generators producing 1 megawatt of power for three years (in addition to the cost of the generator).
A one new megawatt diesel generator (fuel not included) weights about 8.7 short tons and costs about $180,000 (including shipping but not including installation) with dimensions of about 169" x 79" x 93" but without fuel tanks. One twice that capacity with everything included weighs about 21.25 tons:

A 2,000 kW set can be housed in a 40 ft (12 m) ISO container with fuel tank, controls, power distribution equipment and all other equipment needed to operate as a standalone power station or as a standby backup to grid power. These units, referred to as power modules, are gensets on large triple axle trailers weighing 85,000 pounds (38,555 kg) or more.

The combined fuel and generator weight for a 1 megawatt diesel power plant would be about 7,380 short tons in 181 truckloads to operate it for three years.

Diesel fuel produces lots of air pollution, although not as much as coal, producing petroleum and refining it to produce diesel fuel has major environmental impacts, and so does the harm caused by inevitable oil spills when it is transported.

The cost of a fully installed 1 megawatt coal fired power plant, meeting utility grade emissions standards, and ignoring economies of scale, is about $4 million. It would probably take more than 1 truckload to ship a one megawatt coal fired power plant. Generously estimating that it would take three truckloads, the total shipping requirement is 630 truckloads to operate it for three years.

Coal produces an immense amount of highly damaging air pollution, producing it has catastrophic environmental consequences in the area it is produced, and coal has not insignificant amounts of toxic and radioactive materials in it that make storing coal and disposing of coal waste a major environmental threat that can leach into ground water as well. Coal spills, however, are trivial threats compared to oil spills and do not present nearly as much of an explosive risks of a natural gas transportation incident (although coal dust can explode).