Observations From A Chapter 7 Bankruptcy

I recently analyzed the treatment of claims in the Chapter 7 bankruptcy of a medium sized business called Event Pro Strategies, which was a closely held promotions business that operated in about half a dozen or so states and the District of Columbia. It filed for bankruptcy prior to the pandemic, and the order for the final distribution of funds and closing the bankruptcy estate was recently entered.

The overall trends in this case are typical of those reported in the literature of closely held business bankruptcies generally.

There were 161 creditors in the bankruptcy. The tax claims of the District of Columbia are treated as state rather than federal tax claims as they are in bankruptcy, in general. The "other" unsecured general is the claim of a single private individual who extended unsecured financing credit to the firm (who was probably also one of the owners of the company).

I have favored a couple of significant changes in bankruptcy priority that would have had an impact on this case.

Basically, this is because this would reflect how badly the respective categories of creditors need the money. It also would reflect an adjustment of priorities that is common anyway in Chapter 11 bankruptcy reorganizations. 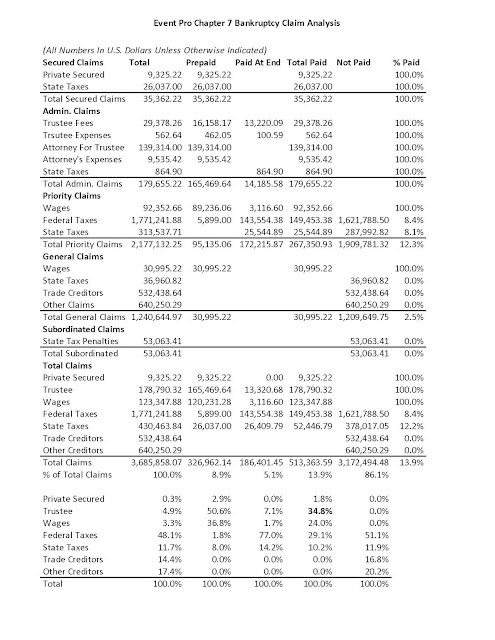