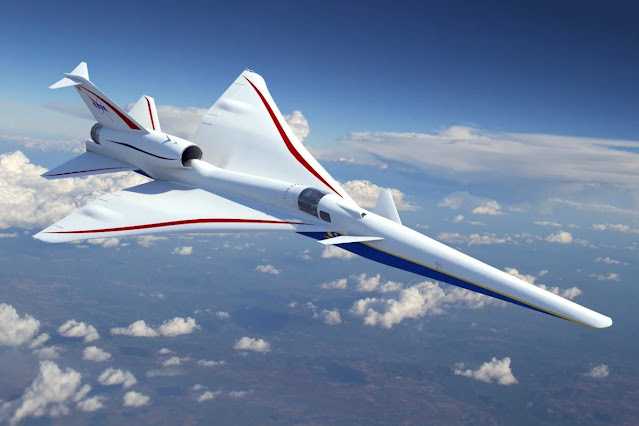 [NASA and Lockheed Martin are developing a] "single-piloted X-59 Quiet SuperSonic Technology (QueSST) aircraft [which is currently half built and in three different sections] which will be used to provide rule-makers the data needed to enable a new commercial market for faster-than-sound air travel over land. The aircraft’s uniquely crafted parts help ensure it will reduce a disruptive sonic boom to a quiet sonic thump to people on the ground when flying.

The team will soon merge all three sections together and gear up for final assembly in 2021. The X-59 will undergo numerous tests to ensure structural integrity of the aircraft and that its components work properly. First flight of the aircraft will be in 2022, and community testing to understand the public’s perception of the X-59’s sound will begin in 2024.

Its cruising speed will be around Mach 1.4, and is estimated to produce a mere 75 decibels or sound, roughly comparable to a home vacuum cleaner.
This optimistic sound estimate is hope to be achieved thorough the X-59’s long and narrow fuselage, and two forward canard wings, which are designed to prevent or disperse shock waves that cause a sonic boom.

From here (also the source of the image).

The X-59 itself, which would have a single pilot, no passengers or significant cargo space, no armaments, none of the avionics, radar stealth, or maneuverability of a 5th generation fighter jet like the F-22 or F-35, and none of the sensors of a spy plane, is purely a technology demonstrator with little or no utility of its own, except that it is cool.

The Concorde flew for about a quarter of a century, not exactly a star compared to other commercial jet designs like the 474, but it was at the top of the supersonic pack. It was lighter, and somewhat smaller than the Soviet copycat. It offered quick service between western Europe and the East Coast, though exclusively for the luxury air travel crowd.
One of the Concorde’s drawbacks, like the Tu-144, was its loud sonic boom. To reduce disturbances to residents on the ground, the Concorde’s throttle was restricted over land, taking advantage of its supersonic top speed only over the ocean.

Most modern jet fighters, especially those designed for air to air combat, are supersonic.

A California company is currently working on developing a supersonic replacement for Air Force One targeted to enter service in the 2030s.

Obviously, though, success in developing quiet supersonic flight would have significant commercial and military applications. But the benefits are more modest than they might seem at first blush.

One of the reasons that the Concorde went out of business is that the market for the time savings that it provided, relative to its inflated cost, was pretty modest. So, the cost premium has to be pretty small to make it profitable in the long run.

Supersonic flight (at Mach 1.4) cuts air travel time roughly in half (the peak speed is about 1,075 mph but average air speed is always a bit slower).

But, it would only save about an hour on a flight from Denver to Minneapolis (a 912 mile trip by car), which is more typical of domestic air travel.

One can obtain almost as much reduction in point to point travel time for commercial air travel, without increasing the air speed of the aircraft at all, on all but the longest trips, simply by having fast rail or express toll road or helicopter transportation to and from the airport, and by cutting the delays associated with security, luggage management and boarding an aircraft.

These fixed time delays per trip are especially important to the competitiveness of air travel with driving a car on a 75 mph interstate highway and 75-225 mph high speed rail on medium distance trips.

A 200 mph train is faster than travel by plane, with existing delays, up to about 830 miles, and is still competitive up to about 1200 miles (six hours by train vs. four hours and fifty minutes by plane).

The competitive advantage of slower high speed rail options splits the difference between the car range and the train range.

Of course, if planes did have competition from high speed rail, the incentive to reduce non-flight time delays on short distance domestic flights of a few hundred miles might very well reduce those delays.

There is no real viable alternative to aircraft for intercontinental and long distance passenger or express delivery flights, where supersonic flights have a clear edge.

The benefits of quiet supersonic flights are very different in the military arena, where supersonic fighters are already common.

One application would be to use supersonic fights to respond more rapidly, with less notice and hence, less exposure to anti-aircraft weapons in bombing runs, especially combined with other stealth technologies. But it offers little benefit relative to low flying hypersonic cruise missiles.

Air to air combat is quite rare and generally a first to shoot wins affair these days, so additional rapid response time without sonic booms is a pretty modest benefit from a practical perspective.

Supersonic aircraft are still highly constrained in passenger and cargo capacity compared to conventional transport aircraft, and they tend to be ill suited to primitive field airstrips. It isn't a sensible solution to deploying heavy military vehicles like tanks or Patriot missile launchers to a combat zone, nor is it a sensible solution to deploying a division, brigade, or even a battalion or regiment of troops. At most, one might deploy a platoon or company of troops this way.

So, if you have up to several dozen personnel who need to apply their skills in person on a highly time urgent basis, and they have essential skills so scarce that you have only a few hundred or fewer people in the world with those skills, this might make sense.

Realistically, however, the kind of people who fit that description are primarily specialist physicians, specialist engineers and technicians, linguists in obscure languages, diplomats and dignitaries, ace fighter pilots, and perhaps truly remarkable veteran military commanders. And, realistically, even including bodyguards, aides and support personnel for the VIPs being transported, a dozen or two passengers is probably enough.

With any less scarce skillset, prepositioning personnel at multiple locations around the globe to reduce the distance that they need to travel probably makes more sense than trying to cut their travel time in half.