Many posts I make on gun control carefully cite the factual support behind reasons for gun control. Click on the gun control tag if you want to review them. This is more of a laundry list of reasons.

* Banning guns is not like banning other inherently dangerous products like cars or cooking facilities or knives that have many legitimate and commercially essential uses.

* The legitimate uses of guns are (1) hunting, (2) defense from animals, (2) self-defense and defense of other from humans, (3) military use, (4) target shooting, and (5) as historical artifacts in collections.

* The vast majority of non-law enforcement, non-military defensive uses of firearms are acts that are actually crimes.

* Legitimate defensive use of firearms is very rare.

* More active shooters are forcibly stopped with non-firearms than with firearms.

* Owning a gun subjects you to great risk of being a victim, not lower risk statistically.

* Encouraging political accountability and discouraging counter-insurgency type measures from the government is not a legitimate use of firearms, or legitimate reason to own firearms. It is also futile.

* A significant share of illegitimate uses of firearms comes from people who obtained and possessed those firearms legally until shortly before the crime (e.g. until they are brought to someplace that guns aren't allowed).

* Openly carrying a firearm as a private citizen is inherently an act of intimidation and an implied threat. Notably, because of this, no law enforcement officer is almost every prosecuted or held liable for shooting and killing someone in possession of a firearm with an ability to use it.

Law Enforcement Use Of Firearms

* Widespread availability of firearms is one important cause of excessive use of deadly force and inappropriate use of techniques like "no knock" warrants.

* Law enforcement deaths in the line of duty are rare. The profession is nowhere near the top of the list for the highest risk of occupational death or injury. 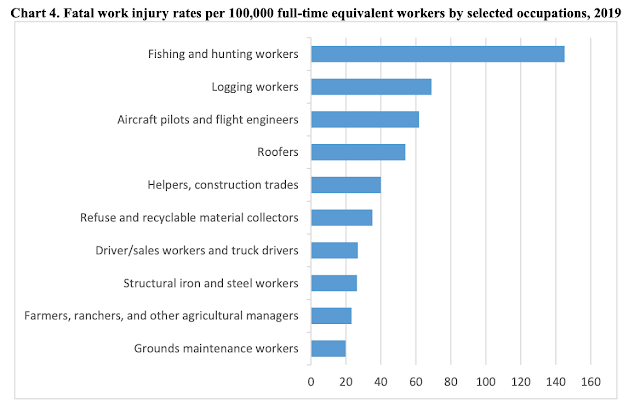 From the U.S. Bureau of Labor Statistics.

From 2015-2019 the number of fatal occupational law enforcement injuries in the U.S. ranged from 97 to 127 . In 2019, there were 97 law enforcement deaths in the line of duty, 52 from violent acts, 42 from traffic incidents, and 3 from other causes. This is a rate of 6.7 deaths per 100,000 full time equivalent workers, which is a bit less than truck drivers and taxi drivers and a bit more than average rate of occupational fatalities as employed men generally (5.7). The likelihood that a police officer will be killed in the line of duty over the course of a 40 year career is about 0.4%.

* Removing one means of committing suicide does not increase the likelihood of using other means.

* Preventing one suicide frequently prevents someone from ever committing suicide.

* The U.S. has more gun deaths than pretty much any other country. This is correlated strongly with rates of gun ownership in other countries.

* Poor control of access to firearms causes lots of gun deaths (often accidental) among children, and also increases the availability of stolen firearms to people intending to use them in crimes.

* Handguns aren't very accurate in the hands of the vast majority of handgun owners except at very, very short ranges.

* Some of the main kinds of gun murders are domestic violence, murder-suicides of acquaintances, gang warfare, impulsive heat of passion shootings (often when drunk or on drugs).

* The vast majority of murders are of people of the same race and ethnicity.

* Men overwhelmingly misuse firearms in all respects much more often than women.

* Mass shootings traumatize society much more broadly than other kinds of shootings because they are harder to protect and guard against.

* Predicting who will be a mass shooter is highly imprecise.

* Alcohol and drug use are often co-morbid with improper uses of firearms.

* Essentially every mass shooter either dies in the act or is convicted of a serious crime and never released until on the brink of death, if at all.

* The death penalty does not meaningfully discourage crime relative to long prison sentences.

* Decapitation of organized crime entities typically leads to many deaths in gunfights of succession without reducing organized crime for any significant period of time.

* Many kinds of gun control work, but the broader the geographic area they apply to, the more effective they are at producing results.

* Prior to Heller, the Second Amendment was a dead letter in American jurisprudence that did not create an individual right. A follow on case made it applicable to state and local governments in a poorly reasoned decision.

* The best argument for a right to bear arms is that in the U.S. there is no legally enforceable right to have law enforcement try to stop violent crime. This obligation is purely political. Most people are surprised by this fact.

* Very few people are badly injured or killed by wild animals that firearms would be purchased to defend against.

* U.S. laws related to guns that do exist are deliberately ineffectively enforced for political reasons.

Well...
I was sitting around shooting the shit with buddy waiting for a compile to finish and we were talking gun control and Jim Crow. This buddy, who just happened to be a black male, toward the end of the convo looked over at me and repeated the words of Charlton Heston "They can have my guns when they pull them from my cold dead hands", and we both laughed. Yep. So like so many things in the USA the resolution to gun control is tied to black-white relations and is not amendable to simple solutions.

They are tied to race relations. I was considering adding a few more race related points above but got pulled away to actually do work that I get paid for. Maybe I'll go back and add a few when I have time.